v Faces in KS: Michael Maffry - Sports in Kansas 
Warning: include(../includes/bodytag.php): failed to open stream: No such file or directory in /home/kansass/public_html/ks/news/index.php on line 36 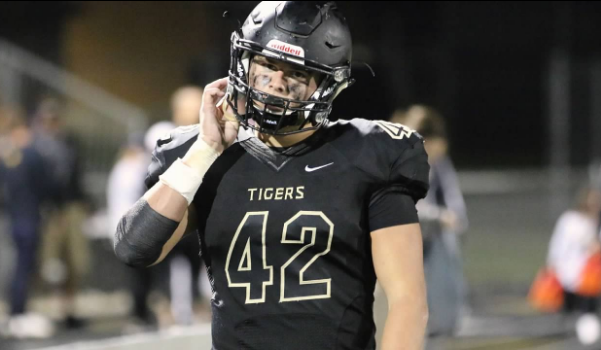 Last season as a junior Michael Maffry of Blue Valley had one of the best seasons in the state as a linebacker. He led all classes of Kansas in tackles with 172 stops on the way to a 6A runner-up finish for the Tigers. For his efforts, he was named the Sports in Kansas Non-Senior Defensive Player of the Year in the state of Kansas. Maffry isn't the biggest, fastest, or strongest player on the field, but he is always where the football is. He is a tackling machine.

"I wouldn't describe myself as insanely athletic or big, I'm more of just a football player. I've played pretty much every position in the 10 years I've played, and I understand football really well." Maffry said.

He is definitely understanding how to play football once again in 2016 as he has started off his senior campaign with 42 stops after the first three football games. The 6-foot-1, 220-pound, linebacker also has two interceptions in his first three games as Blue Valley is off to a 3-0 start.

Maffry is seeing interest from some colleges in football but  that's not where his head is at right now, he is only worried about the 2016 season and that means getting back to the state title game in 6A. First, the Tigers have the very brutal Eastern Kansas League schedule, which will help them prepare for anyone they may face in the 2016 6A playoffs. That schedule has already included a week one win, 35-28, over two-time 4A-I champ Miege and wins over Blue Valley West and Blue Valley North. Still on the schedule is several other EKL schools, including 5A defending champ Mill Valley and 5A power St. Thomas Aquinas.

"Our playoff run last year proved how tough the EKL was. With some schools out of the EKL jumping up to 6A and what other league schools are doing in other classes, I think its started to prove it could be the best league in the state." Maffry said.

Expect Blue Valley to once again be in contention for another deep run. Over the past 25 years, it has possibly been the most consistent program in Kansas. The Tigers are 43-14 all-time in the Kansas playoffs and have won six state titles, four under Steve Rampy and two under current head coach Eric Driskell. Rampy also had four state runner-up finishes and Driskell has two. Driskell is 61-16 in his seventh year as the head coach.

"We have a tradition of winning and every year the senior class and the rest of the team recognizes that and it fuels us to continue it. And it certainly doesn't hurt that we have one of the best coaching staffs in the state, if not the best in the state. Coach Driskell lets us play loose and he has us always working hard." Maffry said.

Blue Valley is primed for another big run and also return all-state candidates in lineman Kirrian Kirby and running back William Evans. First year starting quarterback Matthew Dercher is near the top in passing yardage in 6A and has top targets Harrison VanDyne and Gus Gomez to go to. The Tigers (3-0) will continue play this Friday as they travel to defending 5A champion Mill Valley (3-0) in Shawnee. Mill Valley is in their first year of EKL play and is ranked the #1 team in the state in 5A by Kpreps.

"Our season is going well, we've had a nice start against some tough competition and we are excited with how we will do this year." Maffry said.

We caught up with Michael in the latest edition of Faces in Kansas.

This feature is presented by the Blue Valley Touchdown Club, a proud supporter of Sports in Kansas and Top Speed (Strength & Conditioning), LLC, see them online at www.topspeedtraining.com

I started playing football in 2nd grade. I always loved it growing up but a lot of it was encouraged/forced by my dad, which I'm really happy he did looking back on it.

Our season is going well, we've had a nice start against some tough competition and we are excited with how we will do this year.

How would you describe yourself as a football player?

I wouldn't describe myself as insanely athletic or big, I'm more of just a complete football player. I've played pretty much every position in the 10 years I've played, and I understand football really well.

Why does Blue Valley have such a consistent program?

We have a tradition of winning and every year the senior class and the rest of the team recognizes that and it fuels us to continue it. And it certainly doesn't hurt that we have one of the best coaching staffs in the state, if not the best in the state.

What is it like to play for Coach Driskell?

Playing under Coach Driskell is a lot of fun. He understands that we like to be loose and have fun at times and he even adds to the fun, but he knows when to get our attention and get us working hard.

How big is the community and school support for Blue Valley Tiger Football?

Our community and school gives us tons of support through fundraising and spirit. Our friends in our school do an awesome job cheering us on, our parents are always involved in football to help us out, and we have a lot of sponsors helping us have a great experience on game day.

What is it like on game day in Stilwell?

It's a little hectic, it seems like everybody you see driving has some sort of Blue Valley sticker and they all are either going to the game or plan on watching it wherever they have to be.

Who are some of your key players this season?

There's a lot of guys playing great this season for us. Offensively Matt Dercher is doing a great job for us after replacing Colton McCumber, William Evans is probably one of the most dominant backs in the state, and Harry Van Dyne is also one of the best receivers in the state. Defensively, we have some sophomores stepping up this year in Eric Olson at safety and Sutton Williams at D-End, Ashkon Saravi is playing really well at the other linebacker spot next to me and our production has a lot to do with how well our D-Line is playing up front which is Baker Lister, Dawson Krug, Sutton Williams, and John Pikus.

Just how tough of is the Eastern Kansas League?

I think our playoff run last year proved how tough the EKL has always been. With the jump to 6A for a lot of our schools we are starting to show that the EKL is the toughest league in Kansas.

What will it take to get back to the 6A state title game?

We put a huge emphasis on just progressing every single week throughout the season. Hopefully we can have some learning opportunities along the way to toughen us up, but we'd like to do that without a loss. We know we are capable of doing it we just have to put our minds to it.

What did you do in the off-season to become a better player?

During the off-season we always have weights starting in January until August at 6am. Other than that I trained with Coach Potts at TopSpeed for a time.

I'm undecided on what I want to do in college.

Snapchat is a more entertaining and easier to talk to a person one on one than putting everything out publicly.

My favorite song is Firework by Katy Perry.