v Faces in KS: Jacob Green - Sports in Kansas 
Warning: include(../includes/bodytag.php): failed to open stream: No such file or directory in /home/kansass/public_html/ks/news/index.php on line 36 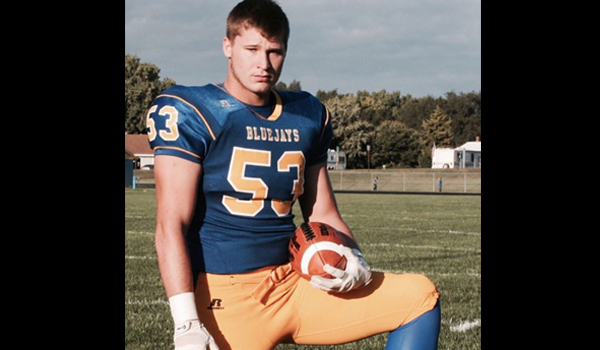 Norton’s Jacob Green grew up admiring his older brother’s passion for football at a young age, so much that Jacob quickly fell in love with the game when he was able to begin playing tackle football in third grade.

“Third grade was the first year I was able to strap on the helmet and shoulder pads,” Green said. “I fell in love with the game ever since.”

Green, who is in his senior year for the Bluejays has compiled numerous awards over his 3+ years for the blue and yellow. Green has been named to first-team All-Mid Continent League all three years, Hays Daily News Defensive Player of Year the past two seasons, Kpreps 3A All-State Team, Sports in Kansas All Non-Senior Team, and the Wichita Eagle & Topeka Capital Journal Top 33 All-Class Team.

The Bluejays are off to a 2-1 start on the year, defeating Goodland and Oakley, while falling to Plainville. Norton has been a force in 3A the past two years, going 19-4 combined between the two years. The Bluejays also feature junior quarterback Jace Ruder, a division one talent, with five FBS offers and junior speedster Tevin Petrie in the backfield.  Norton coach Lucas Melvin has his team off to another hot start and will look to continue that on Friday when they’ll host Smith Center.

“Coach Melvin is a great coach and an even better guy,” Green said. “He takes everyone in as his own and really makes everyone take that step towards manhood and life after football.”

“I don’t mind being shifted around,” Green said. “Wherever they need me, I’ll play. We have a really talented offensive line this year with everybody on the line starting at least once in their career.”

Green and the Bluejays finished the 2015 season with a 9-3 record, losing to Wichita Collegiate in the sectional round of the 3A playoffs. They want to prove to everyone that they’re even bigger and better this year.

“We really bought into the offseason conditioning program put on by coach Melvin,” Green said. “I did a lot of extra work on my own time to be able to slim down and become faster.”

Standing at 6-foot-1, 225 pounds, Green has proved to doubters that he has what it takes to make it at the next level, accounting for 43 tackles through three games, averaging about 14.3 tackles a game. Green also has two forced fumbles and a pick-six in last week’s win at Oakley.

“My plan is to play football at the next level, wherever that may be,” Green said. “I’d like to major in sports management and educational policy and leadership in hopes of being an Athletic Director.”

Green hasn’t just been successful on the football field, he’s also part of the four-time 3-2-1A state champion wrestling team. Green has a career record of 56 wins and just 12 losses, including a third place individual finish at 220 pounds his freshman year. Just before regionals in Green’s sophomore year, he tore his ACL in a tournament, ending his season shortly. Green was unable to wrestle his junior year because of a knee injury as well.

Green plans to go out for wrestling his senior year and will hope to be apart of another state championship team.

“Wrestling is one of the biggest that can help a football player with flexibility, agility and especially the physical nature of the game,” Green said. “We’re going for our fifth straight championship, so that’ll be a big deal if we can do that.”

Green, a Norton native has always enjoyed living in such a small community and being able to have the community rise as one in everything going on in and around Norton.

“Our community is very supportive,” Green said. “It seems as if our town is always growing and improving in everything that goes on here.”

We caught up w/ Jacob below in the latest edition of Faces in Kansas.

This feature is presented by New Age Industrial in Norton, proud supporters of Norton Community Athletics and Nex-Tech Wireless. Be sure to nominate the Nex-Tech Wireless Athlete of the Month from Central Kansas and Western Kansas at the end of every month.

Q. How did you get involved in football?

A: I'd say my passion for football started at a young age watching my older brother play in high school. 3rd grade was the first year I was able to strap on the helmet and shoulder pads and I fell in love with the game since.

Q. You're off to a 2-1 start this year, what are some positives you've taken away from the season so far?

A: The main thing we have to do is come out strong. Our first 2 games we came out sluggish, we picked it up after a while but in one game it was too late.

Q. What are your expectations as the year goes by?

A: Our expectations stay the same throughout the season. It's to take every game at a time and win every play. If we do that, all our hour post regular season goals will fall into place.

Q. What is it like playing for Coach Melvin?

A: It's really cool. He's a good coach and an even better guy. He takes everybody in as is own and really makes everyone take that step towards manhood and life after football.

Q. Who are some of the key players on the team?

A: We have a bunch of good guys this year. The biggest thing we preach is being a team player, so there is really no individual that sticks out. It's like that saying, you're only as strong as the weakest link. And we got some strong links!

Q. Have you been playing mostly LB or DL this year?

A: I've been playing all LB this year which is awesome. I love it back there.

Q. Do you play any offense too?

A: Yeah I'm the left guard on the o-line. We have a really talented o-line this year with everybody on the line starting at least once in their career.

Q. What did you do in the off-season to get stronger and prepare yourself for this year?

A: I really bought into the off season conditioning and lifting program put on by Coach Melvin. I did a lot of extra work on my own time to be able to slim down and become faster.

Q. What are your plans for next year?

A: My plan is definitely playing football at the next level wherever that may be. I'd like to major in sports management and educational policy and leadership in hopes of being an Athletic Director.

A: I'd say my favorite subject would have to be history, lunch is a close second however.

A: I don't really have a favorite athlete.

Q. Have you always lived in Norton? If so, what has it been like growing up there?

A: I was born and raised in Norton, yeah. It's awesome here! Our community is very supportive and it seems like our town is always building and improving!

Q. What's one thing an average person wouldn't know about you?

A: I always put someone else's feelings before mine. Family is always first!

Q. Do you have any pregame routines that you like to do?

A: No, not usually. Just relax, focus, and visualize myself making the big plays.

Q. Do you plan on wrestling in the winter or are you going to just stick with football?

A: As of now I do plan on wrestling. Wrestling is one of the biggest things that can help a football player with flexibility, agility, and especially the physical nature of the game. Plus we are trying for 5 straight State Championships.

Q. Anything else you wish readers would know?

A: I am honored and blessed to be on this but if it weren't for my teammates none of this happen!