v Faces in KS: Brandon Mlekus - Sports in Kansas 
Warning: include(../includes/bodytag.php): failed to open stream: No such file or directory in /home/kansass/public_html/ks/news/index.php on line 36 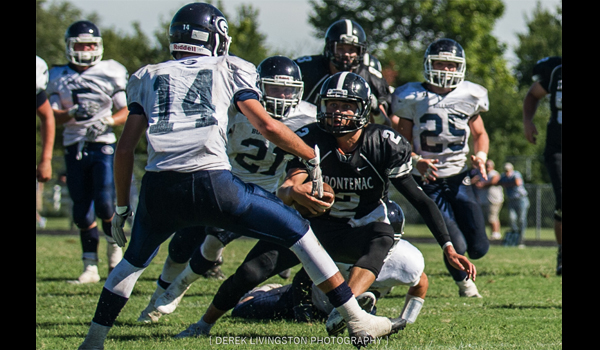 Heading into the 2015 football season it was unknown who the starting quarterback would be for the Frontenac Raiders. They turned to then-junior Brandon Mlekus, who had little experience at the position over the years of playing football, and primarily served as a starting defensive back in 2014 as a sophomore. Since then, the Raiders have never looked back with Mlekus taking over as their quarterback. Now a senior, he is one of the top signal callers in the entire state of Kansas for the smaller classifications after breaking out for 2,627 yards of offense and 27 touchdowns as a junior last fall.

"It was different getting used to the speed of the game last year as a quarterback. Luckily I put in a lot of hard work and had plenty of good guys around me to make it easier." Mlekus said.

Mlekus junior season included 1,830 yards of passing, a school record at Frontenac, and 797 more on the ground. For years, primarily under Leon Miller, now the head coach at Girard, Frontenac had became known as a team that dominated in the run game and ran the football almost every play. But under fifth year Raider head coach Mark Smith, a three-time all-state quarterback that went undefeated in his high school career at nearby rival St. Mary's Colgan and All-American at Pittsburg State, things have opened up in the playbook over the last few seasons. Now a senior, Mlekus has already started off the 2016 campaign right where he left off last season with 408 yards rushing and 304 yards passing with nine offensive touchdowns and a interception return for TD in the FHS 3-0 start. He accounted for three of the Raiders four scores in last weeks 28-7 victory over Colgan, with touchdowns on both sides of the ball.

"He makes it very easy for me to call plays. He brings that wrestling mentality to the football field and is a great competitor. He's very versatile in what he does offensively and gets it done on both sides of the football." Smith said.

Wrestling mentality is exactly right. Heading into last season, people around the area knew Mlekus more so as a high school all-state wrestler than a football player. Mlekus isn't the biggest guy in the world, standing around 5-foot-10 with a football playing weight of just over 170 pounds, but he is pound for pound one of the toughest multiple sport athletes in the state. At the 152 pound class in wrestling last winter he took 4th in very loaded 4A class and racked up over 40 wins on the mat on the season. He was also an all-league baseball player last spring for the Raiders.

"I love the one on one aspect, whatever happens, you're responsible for the outcome. However football is my favorite sport. The wrestling grind helps me with being mentally tough at all times. It also helps big time in football with tackling for me." Mlekus said.

As he mentioned earlier, he has been surrounded by great players to help him in the past and he is once again in 2016. The Raiders feature one of the top lineman in 4A-II in A.J. Lusker, a 6-foot-2, 260-pound, offensive and defensive lineman to help pave the way. They also return defensive back Isaac Bicknell and linebacker Dylan Flora, who should be two of the top defensive players in 4A-II this season. Senior running back Cadin Bolinger, senior running back Austin Madl, senior receiver/defensive back Ryan Long and junior defensive end Broc Ginavan also all figure to have big years for FHS. After a 7-4 season in 2015, the Raiders are primed for another deep playoff run with six starters coming back from last year on each side of the football.

"Everyone showed up to weights all summer and we pushed ourselves. Our season is going good so far, we have some things to work on as a team, but so far so good. Our goal is to win a state championship." Mlekus said.

Frontenac, the second all-time winningest program in Kansas history, hasn't played for a state championship since the Raiders took second in 3A in 2000. They haven't won a state title since Miller and the Raiders won their only football state title in school history in 2-1A back in 1994.

We caught up with Brandon below in a Q&A for the latest edition of Faces in KS.

This feature is presented by Labette Bank of Frontenac. Labette Bank and their Southeast Kansas locations are a proud supporter of Southeast Kansas area athletics and statewide sports coverage from Sports in Kansas. Be sure to nominate the Labette Bank Athlete of the Month each and every month by emailing chetkuplen@kansas-sports.com or tweeting @sportsinkansas. Visit them online at www.labettebank.com

It was just one of those sports I started playing when I was really young, and I loved it.

How is the season going so far after the 3-0 start?

It’s going good so far, we have some things to work on as a team, but so far so good.

What are your team expectations this year?

Our only goal is to win a state championship. What is it like playing for Coach Mark Smith?

It’s great, he makes everything so easy, and he knows what he’s talking about all the time.

Who are some of the key players on this years Raider squad?

How would you describe your style of play as a quarterback?

Pretty mobile, I can drop back and throw but most of the time I’m either running or sprinting out.

What did you and your team do this past off-season to make sure you guys were ready for 2016?

Everyone showed up to summer weights, and extra 7-7 workouts, everyone worked out hard and pushed themselves.

Last year you started your first game ever as a varsity quarterback, did you ever imagine you would be one of the best in the state a year later?

No, it was different getting used to speed of the game and it took a lot of hard work. Plus I have a lot of really good guys around me and they make it easier.

How do you use wrestling to your advantage in football?

Wrestling is a grind and a struggle all the time, so it helps with being mentally tough in the tough times, and also it really helps with tackling.

My favorite thing about wrestling is the one on one aspect, whatever happens, you’re responsible for the outcome. And no it’s not my favorite sport, that would be football.

Not sure, hopefully playing football somewhere.

What is it like to grow up in Frontenac?

It’s a small town and you pretty much know everyone. There really isn’t much to do here but we make it fun.

I’m actually dominantly left handed, the only thing I do right handed is throw.