v Faces in KS: Joel Donn - Sports in Kansas 
Warning: include(../includes/bodytag.php): failed to open stream: No such file or directory in /home/kansass/public_html/ks/news/index.php on line 36

Joel Donn (13) has 29 tackles after two weeks of the season for Mill Valley. (Photo: Mia Thomas) 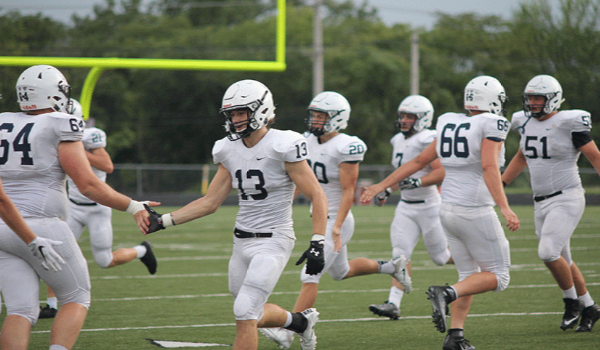 Mill Valley made history in 2015 by winning their first ever state football title by going 12-1 and capturing the 5A state championship. A lot of unknowns and starters had to be replaced from last season as only five total starters returned for the 2016 season. One of those starters back is senior Joel Donn, a 5-foot-11, 175 pound senior safety, who looks to be one of the best defenders in Kansas this season.

"Joel is a tremendous leader for us. He was our leader last year as a junior on our defense. He has kept that going this year." Mill Valley head coach Joel Applebee said.

Donn had a breakout junior campaign and was all over the field for the Jaguars in 2015 in which he registered 74 tackles and three interceptions. Things haven't changed too much this season as Donn is having one of the best seasons in Kansas as a defensive back in 2016. He has registered 29 tackles, an interception, a forced fumble and three tackles for loss in his first two games. After checking out Donn last Thursday against Blue Valley Northwest it was pretty easy to see what makes him such a special player as he has a natural nose for the football and was in on nearly every play.

"I like to think of myself as the quarterback of the defense. I make sure everyone on the field knows the coverage at all times. I am not the biggest safety so I use my attributes to my advantage." Donn said.

The Jaguars are off to a 2-0 start and had to replace so many key players from a year ago, including WR/DB Christian Jegen, OL Ben Hecht, DL Anthony Brown, TE/WR Lukas Krull, and QB Logan Koch, all who earned all-state honors as seniors over the 2015 season. First year starter Brody Flaming has stepped up big at the quarterback position as a junior and has over 700 yards and 9 touchdowns. Ben Hartman has over 300 yards receiving after the first two weeks. Keegan Zars, a division one recruit, is also back on the offensive line.

"I really enjoy watching my friends fill these roles. People have doubt because we did lose such a large talented class last year, but who do you think was running scout team for them last year? It's all a process, each guy makes the other better. My teammates that are replacing these starters from last year already went against the best now it is just transferring to Friday nights." Donn said.

Donn and his teammates look primed to make another deep run in 5A but right now all the focus is on week three as the Jaguars host EKL opponent Blue Valley Southwest on Friday. The Jaguars took care of business last week over Blue Valley Northwest, 38-19, and St. James Academy, 35-13, in week one. They are currently the number one ranked team in the state in 5A by Kpreps.com. The Mill Valley schedule will get tougher throughout the season in their first year ever in the Eastern Kansas League with teams like Blue Valley, Aquinas and Miege all still on the schedule this season.

"Our schedule is extremely tough this year. We are playing the best teams in the state. There are no easy games this year and being defending state champions we are going to have a target on our back. We will get everyone’s best shot. We need our schedule to be tough now so we can achieve the ultimate goal of another state title." Donn said.

We caught up with Joel below...

This feature is presented by All Weather Control, Heating and Cooling, Your Indoor All Weather Specialists. See them online at www.allweathercontrol.com, proud supporters of Mill Valley Jaguar Football and 5A updates with Sports in Kansas.

Ever since I was little my older brother, Alec Donn (also played for Mill Valley), played so it was almost an expectation to play. My dad was my coach all the way until middle school and still to this day he helps me watch film. Football was always something I wanted to do and loved to do!

What was it like to play on a state championship team last fall?

Playing on the state championship team last year was an incredible experience. I have played with those older guys since I was little on tournament teams. So in high school it was no different playing with them. I knew being smaller than most of them I had to bring it to practice every day in order to compete with them. That’s as far as the players go. The parents and fan base was different because they expected nothing less than a state championship because everyone knew we had a special team. Given that expectation the coaches raised the bar with everything.

How valuable was it to elevate the level of play with your guys schedule your sophomore year to put you in position now to be a state power?

It was a vital decision. We needed that more than anything. You have to compete with the best to be the best. If we were to have played less talented teams throughout the year we might’ve not been prepared when playoffs came around.

What is it like to play for Coach Applebee?

It is an honor to play for Coach Applebee. Everything we do has a strict schedule to follow. Our program is as organized as possible and it makes everything efficient which gives us more time to put in work. When he first came to this program my brother was a Sophomore and since then he has only made everything better. He has not taken any steps backward and that is what it takes to be a great program.

What put Mill Valley football on the map, is it pure talent, or is there a lot of hard work in the weight room that people don’t realize?

What put Mill Valley on the map is when we reached out and started playing higher caliber teams. We most likely put in more work in the weight room than any other program in the state. This is one of Coach Applebee’s largest focus points throughout the year. We have had the two strongest classes back to back. We are breaking records in the weight room all the time and that isn’t pure talent that is through hard work.

Well the offseason is really where I improved. I got stronger and faster which has allowed me to play well these first couple of weeks. I cannot be complacent because I have plenty of room to improve.

What is it like to have to replace so many key starters from last year?

I really enjoy watching my friends fill these roles. People have doubt because we did lose such a large talented class last year, but who do you think was running scout for them last year? It is all a process, each guy makes the other better. My teammates that are replacing these starters from last year already went against the best now it is just transferring to Friday nights.

What more can be said about the job Brody Flaming has done in replacing Logan Koch?

People look at it like how is Brody going to fill Logan's shoes, but Brody has his own shoes. These two quarterbacks play a different style of game. Brody is doing an amazing job at the quarterback position with 740 yards passing and 9 TD’s.

Just how tough is your schedule this year?

Our schedule is extremely tough this year. We are playing the best teams in the state. There are no easy games this year and being defending state champions we are going to have a target on our back. We will get everyone’s best shot. We need our schedule to be tough now so we can achieve the ultimate goal of another state title.

What will it take to stay focused and repeat in 2016?

In order to repeat we need to build every week. We need to get better with every rep we get in practice, the weight room, and every film session.We can not take steps back and we need to take what we learn in one week and apply it to future weeks. We will need to stay healthy too.

How would you describe yourself as a player at the safety position?

I like to think of myself as the Quarterback of the defense. I make sure everyone on the field knows the coverage at all times. I am not the biggest safety so I use my attributes to my advantage. I can be relied upon in all situations. I am the blue shark in our landshark defense which basically means I roam the deep waters/field and move very quickly and travel far distances. We all have a role on the defense and we would not be effective if every person is not doing their job.

Who are some of the other key players on your team that have really stepped up this year?

Every player is key to start off with. If one person doesn’t do their job the whole play gets messed up. On the defensive side of the ball we have Blaine Boudreaux on the d-line who is a force to be reckoned with. Really the entire d-line is amazing. Corners, Cole Ivey and Alec Bergeron have really stepped it up lately. Ivey had six PBU’s last game and Bergeron who came to the defensive side this year has been doing a great job in the transition. Jack Eber has been setting the edge and allowing everyone else to pursue. Our linebackers have depth and are very physical, good tacklers. Evan Rice has been a huge factor on both sides of the ball. Brody Flaming taking on the QB role has obviously thrived. Ben Hartman is having an amazing year and will continue to. The offense would not be putting up the stats and points they are without the offensive line. We have had countless sophomores step up and be big play makers such as Logan Talley on the offensive side. It is all a team effort at the end of the game. It takes every player on both sides of the ball to come out with a W.

Plans at the next level, football?

I love the game of football, so I would play if the opportunity was right. I have some schools showing interest, but have not received any formal offers.  I am keeping this option open, but I am undecided as of now.

Math has always come easy to me. Due to some amazing teachers History has become a favorite as well.

Game night in Shawnee isn’t like anything else in the world. The energy is brought from the players, band, student section, cheerleaders, family, and the announcers. Everything under those lights is simply amazing.