v Faces in KS: Jacob Murray - Sports in Kansas 
Warning: include(../includes/bodytag.php): failed to open stream: No such file or directory in /home/kansass/public_html/ks/news/index.php on line 36

Jacob Murray is primed for an all-state caliber season in 5A. (photo: Joey Bahr) 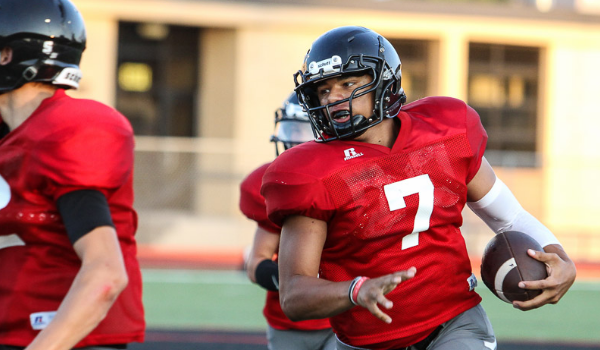 Great Bend made the playoffs last season for the first time since 2010. The Panthers were 3-6 in 2014 to an improvement of 7-3 last season. A big reason for that is Jacob Murray.

Murray, a 5-foot-11, 195 pound senior, dual threat quarterback, opened the eyes of many last season as he completed 113 of 207 passes for 1,703 yards with 14 touchdowns and also added 772 more rushing and 17 touchdowns as a junior. Murray has proved to be a natural at the position and is one of the top signal callers in Kansas this season. He opened up the 2016 campaign with six total touchdowns (three rushing, three passing) last Friday night in the 57-13 victory over Coffeyville Field Kindley. He had 231 yards passing and another 124 on the ground.

“He’s a pretty special kid. When the lights come on, he’s pretty good with the ball in his hands. I had an idea coming into this job how good he was from film, but we figured out last Friday. The scary part with Jacob is he can be even better.” Great Bend first year head coach Erin Beck said.

Beck, who came over as an assistant from Truman, Missouri, is a Claflin native, and previously coached at Great Bend. Murray and Beck have big expectations for this year’s Panthers squad. They return Bryce Lytle who had 1,049 yards last season at wide receiver. Cal Marshall also returns at running back this season for the Panthers and rushed for nearly 600 yards last season. The defense has Payton Mauler and Jensen Randel back at linebackers and Dominique Rideaux at defensive line. Mauler led the defense one year ago with 117 tackles and now has 176 in his career as a three year starter as Randall racked up 75 tackles and Rideaux had 59.

“We have a solid team and a lot of competitors on our roster this year. We’ve had other guys step up as well. Brayden Smith is a big body with good hands a great play maker. Nick Reed is also a guy in the secondary to look for.” Murray said.

For now Great Bend’s focus is on week two and they get Western Athletic Conference opponent Hays on Friday. Hays (1-0) is coming off a big win over traditional state power Scott City (4A-II), 31-21. Great Bend (1-0) is currently ranked #5 in the state in 5A in the latest Kpreps.com Poll.

“It’s going to be a different style of football than we saw last week. They are a ground and pound type of team. The real strength is their linebackers. Our biggest concern is preventing big plays. They like to run first but they can throw it as well.” Beck said.

We caught up with Jacob Murray below.

This feature is powered by Nex-Tech Wireless. Be sure to nominate the Nex-Tech Wireless Athlete of the Month for Central Kansas and Western Kansas at the end of every month by emailing admin@kansas-sports.com.

5A updates from Great Bend this season are brought to you by the Panther Booster Club, proud supporters of 5A updates this season with Sports in Kansas.

My Dad got me involved in football when I was really little.

What should we expect from Great Bend this year?

I expect big things for Great Bend this year, we have a pretty solid team and a lot of competitors on our roster.

It's kind of stressful to play the Quarterback position, it takes a lot of responsibility and great leadership. It can be really challenging, but it's super fun and exciting to be in control of the offense.

Who are some of the key playmakers on your team?

On offense there is Bryce Lytle, who has outstanding hands, Is very quick, and an amazing route runner. Also Brayden smith who is a really big body with very good hands and a great playmaker. On defense Payton Mauler and Jensen Randall, who are very tough and aggressive, and have sense of urgency for the football. Also Dominique Rideaux at nose guard, is a phenomenal player, and great football player. In the secondary there is Nick Reed and Cal Marshall who are lock down corner/safety.

On game day in Great bend is a crazy feeling. Everyone is talking about the game and how excited they are too come watch. We have an amazing fan base here, they love to watch some panther football!

What is it like to play for different coaches?

It's pretty tough to play for different coaches your junior and senior year. But we still have the teammates we've been playing with our whole lives and that helps to stay confident and battle through adversity.

How important is it to use each and every week to get better for this new playoff system in 5A?

It is very important, because this year every game matters. We have to take every week like its a playoff game and we have to win to stay in it.

Math is my favorite subject.

The average person doesn't know that I really enjoy math and numbers.

Plans at the next level, are you going to play sports?

I would like to play football at the next level

My favorite athletes is either Michael Vick or Russell Wilson

When you aren’t playing sports what do you like to do?

I like to listen to music and play video games