v Sports in Kansas: 25 Running Backs to Watch for 2016 - Sports in Kansas 
Warning: include(../includes/bodytag.php): failed to open stream: No such file or directory in /home/kansass/public_html/ks/news/index.php on line 36 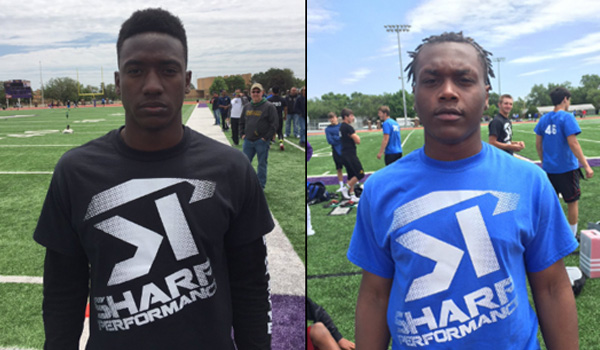 Several running backs return after having big seasons in 2015. Check out who to watch in 2016. Stay tuned over the next few weeks as we will do this position by position. This list is alphabetical by last name, not ranked and not a recruiting list.

Baldwin may be the top running back prospect in the state of Kansas for 2017 and along with Kade  Remsberg of Newton he may be the fastest guy in Kansas to wear pads this fall. He features 4.3 speed, which he showed off at the Sharp Performance Combine in May, and was a first team All Non-Senior from Sports in Kansas in 2015. He split carries with one of the state’s best backs, Raye Wilson, last year. Nobody is catching Baldwin in the open field and he also features great size at the position. Expect a huge senior campaign for Baldwin. He has an offer from Tulane at the FBS level.

Milton Braasch, also a standout defender, is expected to carry a lot of the load of the flexbone attack for the Lancers this fall. Coach Dustin Delaney told us Braasch reminds him of former Hutchinson all-state running back Josh Smith. Also throw in Nigel Houston who could figure in at the back field or play some slot for SME. Houston was a second team All-Sunflower League pick at SM West last season before transferring to East for his senior season. He was the only junior running back on the first or second teams in the Sunflower League. Luke Kaiser is the returning starting quarterback but could also be considered a running back in this offense and you should expect a big year for him. Nine offensive starters return for Delaney, who has went 33-4 in his three years as head coach.

Clark played behind two-time all-state selection Dawson Downing last season but he still showed flashes of what he could do, averaging 10 yards per carry. Although Miege is loaded in the passing game with Putz and Armstrong, the Stags offensive line, led by Colin Grunhard, is always a bright spot so expect some big rushing performances from Clark. He gained nearly 600 yards as a sophomore last fall. Also figure in Dylan Downing, the younger brother of Dawson Downing that is a sophomore starting linebacker, to see some carries this fall.

Cox had over 1,100 yards as a junior last fall for the Trojans. He is one of eight returning offensive starters that went 7-3 in 2015. Expect an All-3A caliber season for the senior back in 2016. Beloit is going for their 11th straight playoff appearance.

Blue Valley has possibly been the most consistent program in Kansas in recent time and always have a cast of all-star players and Evans fits that mold as he heads into his senior campaign. He rushed for 998 yards last season with 12 touchdowns against some of the best defensive play in Kansas. Blue Valley always has solid line play and Evans should have an even bigger year with FBS prospect Kirrian Kirby leading the way. Three of last year’s offensive line starters return for the Tigers.

Faerber had over 1,500 rushing yards as a sophomore last fall, the most ever at Sacred Heart in a single season. He had 16 rushing touchdowns on the season. With eight starters on each side of the football, you should expect another big year for Faerber.

Gonzalez rushed for over 1,000 yards last season for the Lions. Goddard returns six offensive starters from a team that went 6-4 in 2015. Along with quarterback Blake Sullivan, on that 25 to watch list, Goddard should feature one of the better backfields in the Wichita metro.

Hanzlick rushed for 1,949 and 28 touchdowns over his junior campaign to earn all-state honors.  He has 3,402 yards and 51 rushing touchdowns entering his senior season.

Hammes was the other ball carrier in Rossvilles offense a year ago. All the hype was on Tucker Horak for so long but now he is gone and it’s time for Hammes to shine on the Dawgs offense. In addition to being an all-state linebacker, Hammes had over 1,100 yards rushing last year with 10 touchdowns and also had 283 more yards receiving with five more scores. A lot of pieces are gone from last year but we expect Hammes to have a huge year in 2016.

Hill is a tough nosed fullback that helped pave the way for Jesse Nunez and Jared Koster a year ago. With the graduation of Koster you could expect Hill to carry the football a little more. Last season Hill went for just under 500 yards rushing and six touchdowns. The Buffaloes return six offensive starters from a group that went 7-2 in 2015.

Heskamp was one of the top backs in 8-man football last year helping lead his Spearville Lancers to the 8M-I state title. As a junior he rushed for 1,468 yards and 30 touchdowns on limited carries because of blowouts. He averaged nearly 13 yards per carry in 2016.

Jenkins had a huge junior season in which he rushed for over 1,000 yards and scored 21 touchdowns. The Roadrunners return nine starters on offense and will need another big season for Jenkins to improve upon a 6-3 mark last season. Jenkins is an exceptional athlete placing at the state level in both wrestling and track and field.

Kier rushed for 1,457 yards las season with 19 touchdowns on a team that went 10-1. The Tigers return seven starters from their team last season. Kier also doubles as a linebacker where he racked up 89 tackles last fall.

McPherson had 1,100 yards rushing in seven games last season and earned first team All-SEK honors. The senior speedster should be one of the top playmakers in Southeast Kansas this season. McPherson has sub 4.5 speed in the 40-yard dash and sub 11 speed in the 100 meters.

McQuillan is one of the biggest backs in the state. He had over 1,100 yards and 16 touchdowns last year and was a first team all-league performer. McQuillan will have to be big in order for Lansing to make a run in the playoffs as they only return three offensive starters off a team that went 6-4 in 2015.

Meitler and Ryan combined for over 1,700 yards last season in limited carries behind feature back Cale Rogers who graduated. Along with Troy, Smith Center may return the best amount of talent in 2-1A so we expect big years for these two seniors in the backfield. The Redmen return nine starters on each side of the football.

Meyer was an All 4A-II pick a season ago and made the Sports in Kansas Non-Senior team as a running back after rushing for over 1,200 yards as a junior.

With J.D. Woods gone someone needs to step up and that will be Trey Moore who was a nice back alongside Woods last season. There isn’t a lot back for the Chesty Lions on offense and Moore will have to have a big year to help the Lions get back to 2015 form. He features 4.5 speed and has a vertical jump of 39 inches. He has the athletic ability but LHS will also have to find some replacement blockers of the studs they lost in 2015.

Peters plays much bigger than he looks and is one of the fastest players in the 8-man ranks. He had a huge sophomore campaign in which he racked up over 1,500 yards and scored 30 total touchdowns. Peters had 428 yards and seven touchdowns in a single game last season versus Frankfort. This list wouldn’t be complete list in Kansas without a few 8-man players and Peters gets that nod as of the top returnees in his classification.

Petrie was a force on both sides of the football in 2015 as a sophomore for Norton. With a loaded cast of players back including Petrie, Jacob Green and Jace Ruder you could expect a big year for the Bluejays. Petrie rushed for over 800 yards as a sophomore in 2015 and could also be a target for Ruder this season out of the backfield.

Pickering had a breakout season in 2015 in which he averaged over eight yards per carry. He racked up 1,285 and 12 touchdowns over his junior season.

Remsberg along with Jovon Baldwin is one of the fastest players if not the fastest player in Kansas. He can play multiple positions and will be used in the backfield and at receiver this season. He is also a return man and will play defensive back. His speed has earned him a scholarship offer in football from KU.  Expect a big season for the AVCTL-I athlete. Remsberg didn’t place at state in track last year because of injury but was the 5A state champion in the 100 and 200 as a sophomore in 2015.

Rogers was a force on both sides of the football for the Indians in 2015. He rushed for over 1,500 yards and also had 400 more receiving last season. He had 30 touchdowns out of the backfield last season. He also picked up over 80 tackles on defense. They return all but one starter on offense and should be a major contender in 8M-I.

Round is one of if not the best returning back in the state. He had over 1,300 yards and 14 touchdowns as a junior last fall while splitting carries at the running back position with the graduated Antonio Joiner. He was a first team All Non-Senior pick from Sports in Kansas and  is a very hard player to tackle. Rounds isn’t going to wow you with his breakaway speed but he will make you pay for it with his power and ability to find the open hole.  With KU signee Joey Gilbertson back to lead the line, expect another all-state caliber season for Rounds.

Smith went for over 1,000 yards as a sophomore in the very tough AVCTL-I. Although Hutchinson needs to replace several offensive lineman they do return the state’s top offensive line recruit in Josh Rivas (6’5” 330 lbs) who has committed to Kansas State.

Theis had a big year in 2015 where he rushed for over 1,100 yards and scored 21 touchdowns. He also added over 300 yards receiving and five touchdowns. Carroll will need to have a big year from him to get back to the 5A title game.

Williams has been one of the best 4A-II defensive players in the state over the last two seasons and may be asked to a do a little more on offense this season. That’s not to say he hasn’t produced in the past with over 900 yards and 14 touchdowns last season for the 4A-II champions. Pretty impressive numbers for a two-way player in a passing offense. If the Longhorns can get back to the title game, Williams will be a huge reason why on both sides of the ball.

More than 25 backs were listed due to team combos.