v Sports in Kansas: 25 Wide Receivers to Watch for 2016 - Sports in Kansas 
Warning: include(../includes/bodytag.php): failed to open stream: No such file or directory in /home/kansass/public_html/ks/news/index.php on line 36 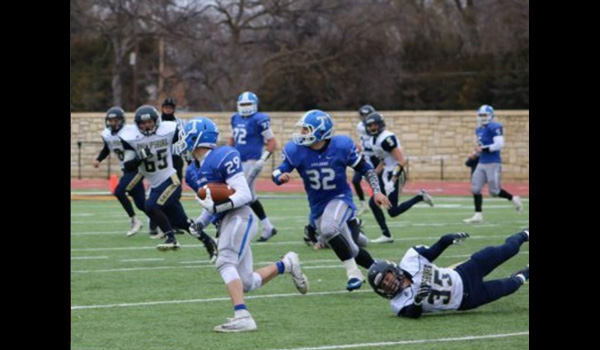 Several wide receivers return after having big seasons in 2015. Check out who to watch in 2016. Stay tuned over the next few weeks as we will do this position by position. This list is alphabetical by last name, not ranked and not a recruiting list.

Anthimedes was the other receiver on Andover Centrals squad last season besides Darraja Parnell and had 648 yards doing so. Although they lose several key pieces still expect him to be a play maker in 2016.

Armstrong is a two-time all-state selection at receiver for the Stags who have won the last two 4A-I state championships. He had over 1,200 yards and 15 touchdowns last year. He has committed to play at Mizzou. He is also the state champ in the 4A 100 and 200 meters as a junior last spring. Also expect transfer D’jmon Colbert, listed on our top DB list, to play some on offense and be a nice compliment to Armstrong.

Baird was one of the top sophomore receivers in Kansas last season for the traditional state power Eagles. He had 667 yards receiving and eight touchdowns. Expect an even bigger role for Baird as a junior and the return of Dalton Dultmeier at quarterback.

Although Gardner has been a bit down Bass was still one of the top playmakers last season in the EKL as a junior. He has nice size to create several mismatches and was a second team All-EKL pick last season.

Davis is a great athlete that can do a number of things on offense and will be a slot that can run and catch the football this fall. He has a 4.55 40-yard dash time that he has ran multiple times electronically and a 4.4 handheld time. He is also the state champion in the 3A 200 meter dash at 22.39 and also runs the 400 in 49 seconds. The explosive receiver can also go up and get the football with a 35.5” vertical.

Dunsmore had a big sophomore season with 587 yards receiving last fall. Expect his numbers to rise this fall with KSU quarterback commit Sammy Wheeler under center. Dunsmore can also go up to get the football with his vertical jump of 32 inches.

Gomez was a first team All-EKL pick last season for the state power Tigers. Expect another big year for Gomez once again in 2016. Blue Valley has several key pieces back to make another deep run in 6A for 2016. He had 43 receptions for 699 yards and eight touchdowns last season.

Harris has been more known as a four year starter defensive back, also on that list to watch, but 2016 may be his year to shine on offense as the top weapon returning for the Dragons. Although Pittsburg has pounded the football with Alex Barnes and Sherrick Rogers the last few years, both are gone and expect Harris to be a target for first year starting quarterback Chase Curtis this fall. Harris will also run the football a little out of the backfield in 2016. Although he is small, he creates space with 4.5 speed in the 40-yard dash.

Huss is one of the top small school athletes in the entire state of Kansas earning all-state honors in three sports last season as a junior. He helped Troy to a 2-1A state runner-up finish last season and has had over 700 yards receiving in each of his last two seasons. Reid Greaser and him should form one of the best WR/QB duos in 2-1A once again in 2016.

Lemons was an All Non-Senior pick last season from Sports in Kansas. Along with Kenyon Tabor, Lemons will be one of the top returning play makers in 6A this season. Lemons has speed to burn with a 40 time in the 4.50 range. He had over 600 yards receiving and 10 touchdowns last fall.

Lytle had a huge season in 2015 as a junior with 1,049 yards and eight touchdowns. He will be one of the top returning playmakers in 5A and returns his quarterback Jacob Murray.

Mullins had 880 yards receiving last season for the Grizzlies. He also had 11 touchdown receptions in 2015. Northwest has several key pieces back to make a deep run in 2016.

Murray was a first team All Non-Senior last year from Sports in Kansas and got it done on both sides of the football. He had 780 yards receiving with seven touchdowns while rushing for 470 more and eight scores.

Remsberg can play running back, receiver, kick returner and defensive back. He is a weapon no matter where he is on the field because of his elite speed. He battled injuries last spring in track but as a sophomore won the 5A 100 and 200 meter dashes. He has 4.4 speed in the 40 yard dash, 10.61 speed in the 100 meters and has been offered from KU as an athlete. We expect him to lineup at receiver and running back this year.  Remsberg was a first team All AVTCL-I pick as a running back/receiver last fall.

Stanley, now a junior, has been making plays since his freshman year for the Titans who have made two deep runs in the 4A-II playoffs. With a cast of all-stars gone from 2015, this should be the year for Stanley to have an all-state caliber season. He is expected to play receiver and in the backfield this season for the Titans.  He has 596 yards receiving with 10 touchdowns in his career and rushed for 283 more last season and three touchdowns.

Stegman had 558 yards receiving last season for 4A-II state champion Longhorns. Although gunslinger Trey Teeter graduates, Stegman should be the top target for the Longhorns this season.

Sanders was a second team All-Sunflower League pick a year ago. Expect him to be the top target for new quarterback transfer Dallas Crittenden. Sanders is an athletic player with 4.5 speed and a 37-inch vertical jump.

Schumacher was one of the top targets for Tucker Horak a year ago with 682 yards and 11 touchdowns for the back-to-back 3A state champions.

Steiner had 497 yards and four touchdown receptions a year ago. He is the top honoree returnee at receiver in the Topeka area, earning second team All-Centennial League and All City in 2015. With quarterback Dalton Cowan returning and new coach Glenn O’Neil calling the plays, you should expect a bigger season for Steiner in 2016.

Tabor is a hybrid receiver/tight end type at the next level, where he has committed to Kansas. He was a first team All Non-Senior from Sports in Kansas in 2015. He was also a first team All AVCTL-I pick last season. Expect another huge year for Tabor as Derby attempts to defend its 6A state title. He had 750 yards and eight touchdowns as a junior.

Don’t let his size fool you Tate is one of the top returning playmakers in the Sunflower League and 6A this season. He earned All-Sunflower honors as a first team at wide receiver last fall. He caught nine touchdown passes a year ago and also had a kickoff return for touchdown. Trevor Thompson, listed on our DB list, is also expected to be a big weapon at WR this season for the Lancers.

Vogt had 559 yards and 10 touchdowns last season for the Swathers. He doubles as one of the top defensive backs in 3A. Expect him and quarterback Zach Essau to be a great combo once again in 3A.

Watson had 812 yards receiving last season for the Vikings. He also had five touchdown receptions. Watson has the size to create many mismatches and will be one of the top returnees in the Sunflower League.

Wilson is an exceptional athlete at the receiver position and had over 500 yards receiving last fall. Despite being on a struggling team, Wilson still produced. Wilson is also an all-state caliber hurdler in track and field. Although Field Kindley may want to run first, if they can find a way to get the ball to Wilson look out as he creates several mismatches. Wilson, with size and speed, is a recruiting sleeper for 2017.

Zarybnicky had 591 yards and 11 touchdowns as a junior last fall. He should be the top target for 8-man record breaking quarterback Will Bruna this fall.