v Sports in Kansas: 25 Linebackers to Watch for 2016 - Sports in Kansas 
Warning: include(../includes/bodytag.php): failed to open stream: No such file or directory in /home/kansass/public_html/ks/news/index.php on line 36

Sports in Kansas: 25 Linebackers to Watch for 2016 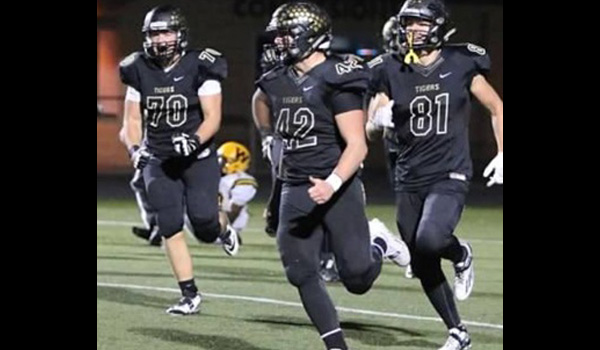 Several linebackers return after having big seasons in 2015. Check out who to watch in 2016. Stay tuned over the next few weeks as we will do this position by position. This list is alphabetical by last name, not ranked and not a recruiting list.

Archer was a first team All AVCTL-I pick last season for the Salthawks. He will be one of the top linebackers to watch in 6A this season. Archer is athletic and has a nose for the football.

Bell was a first team All-Centennial League pick at linebacker last season as a junior. Junction City will be a contender in 6A and has several key pieces back in 2016.

Boyd led the Eagle in tackles last year with 122 tackles. He will be one of the top returning playmakers in 3A this season.

East has a pair of stud linebackers returning for 2016 that make the list as a combo pick. Bradley was the lone junior named to the first team All-Sunflower League team as a linebacker. Bradley should be one of the top returning playmakers in 6A this season. Braasch is a nice athlete at the outside backer position that makes plays all over the field. Braasch is also expected to play a huge role at fullback on offense, so he may be limited to reps on defense, but when he is on the field, you will know.

Carter was a second team All AVCTL-I pick last season at outside linebacker for the Panthers. He will be one of the guys Derby will look to have a big season on defense to put them back in title conversation in 2016.

Davis is an athletic linebacker with speed that can make plays all over the field. He was a second team All Eastern Kansas League pick as a sophomore and should be one of the top junior linebackers in the state for 2016.

Dineen has committed to play linebacker at Kansas where he will join his older brother Joe, a junior starting Linebaker on the Jayhawks. He was a first team All Non-Senior as a junior last fall from Sports in Kansas. Dineen should also be a force on offense where he will play offensive guard. He has also played tight end and full back in the past.

Ellis was a first team All 4A-II pick a season ago at linebacker. He should be a force at running back and linebacker as one of the top returnees in his classification.

Flora had 105 tackles to lead the Raiders on his way to earning all 4A-II and all-area honors a year ago. He also had three forced fumbles, two fumble recoveries and an INT. He doubles on offense as a tight end where he caught three touchdowns last season. He will be one of the top playmakers returning in 4A-II.

Frazier, an outside backer, had a huge year for the Mustangs in 2016. He raked up 93 tackles, picked off two passes and took one to the house for a score. He was a second team All-EKL pick in a loaded league last season. He will be one of the top returning playmakers in 6A this season.

Gower isn’t the biggest guy in the world but he got the job as one of the top playmakers in 2-1A last season. He earned all-state honors at linebacker and helped lead the Panthers to the 2-1A state title. Phillipsburg is up to 3A in 2016 but return a solid cast of players that could make them a contender.

Green has already earned all-state honors on both sides of the football the last two seasons as a sophomore and junior. He will play defensive line and linebacker this season, but has really gotten himself into shape to play the linebacker position where he has dropped 25 pounds from last year. He has one of the best motors in Kansas and that’s why he racked up 145 tackles last season, 32 of which went for loss. Expect Norton to be a contender in 2016.

Hammes had 159 tackles to lead the Rossville defense to their second consecutive 3A state title last fall. He also rushed for over 1,000 yards on offense. Expect a bigger role of him on offense with the graduation of all-state QB Tucker Horak. Hammes, the son of head coach Derick Hammes, was a first team All Non-Senior from Sports in Kansas in 2015.

Henry had a breakout sophomore campaign for the Trailblazers. He earned first team All Non-Senior honors from Sports in Kansas in 2015 after registering 94 tackles in just nine games. 11 of his tackles went for loss.

Heimerman may have been in the shadows of Blake Beckett and Eli McKee but he had a breakout season in 2015. He had 104 tackles on defense, which 18 went for loss and really stepped up big on offense when Beckett went down with injury. He will be one of the top returning playmakers in 3A this season.

Maffry led the Eastern Kansas League in tackles a year ago with over 170 of them. He was also selected as the Sports in Kansas Defensive Player of the Year for Non-Seniors in 2015. Expect him to once again lead the Blue Valley defense to be a contender in 2016.

Marlnee was a first team All Non-Senior last year from Sports in Kansas and will be the top returning linebacker at the 4A-I level this season. He is seeing major interest from the FBS level and has an offer from Wyoming. He was also a 4A-I all-state first team pitcher this past spring.

Great Bend has several pieces back from its successful campaign a year ago and Mauler is one of them. He registered 117 tackles last season and will lead the Panthers defense in 2016.

Nordell is seeing FCS interest and should be a force at both tight end and linebacker for the Panthers in 2015. Expect a breakout campaign for Nordell this season.

Root was named the Linebacker MVP of the Rivals Camp in Kansas City and is seeing major FBS interest. He was a first team All Non-Senior last year and was also a first team All-3A pick. Collegiate is now up to 4A-II but Root will be a force no matter what level In Kansas. He has an offer from Air Force and should see his interest rise this football season.

Steffens had 72 tackles a year ago for the Thunder in 10 games. He doesn’t feature great speed but makes up for it with the size and has a nose for the football. He seems to be wherever the ball is at. Steffens should be one of the top playmakers in 5A this season. Coach Tom Radke calls him the leader of his team and tells us he could also be a force on offense in 2016.

Sullivan was a first team All AVCTL-I pick last season for the Cougars. Sullivan made 109 stops a year ago. He will be one of the top returning playmakers in 5A this season on the defensive side of the football.

Watskey had a breakout sophomore campaign from his linebacker position on the way to a 4A-I state title for the Stags. He is a returning first team All Non-Senior selection from Sports in Kansas and earned first team All-EKL last season. Watskey has also put on 20 pounds in the off-season.

Williams had 145 tackles last season for the Longhorns. He had a monster game in the state title game where he racked up 16 tackles in the 21-0 victory over Holton to claim the 4A-II state championship. Williams also doubles as a fullback and had over 800 yards rushing last season.