v Sports in Kansas: 25 Tight Ends to Watch for 2016 - Sports in Kansas 
Warning: include(../includes/bodytag.php): failed to open stream: No such file or directory in /home/kansass/public_html/ks/news/index.php on line 36

Trevor Kent of Pittsburg is a 6'5 257 pound senior headed to Northwestern. (courtesy photo) 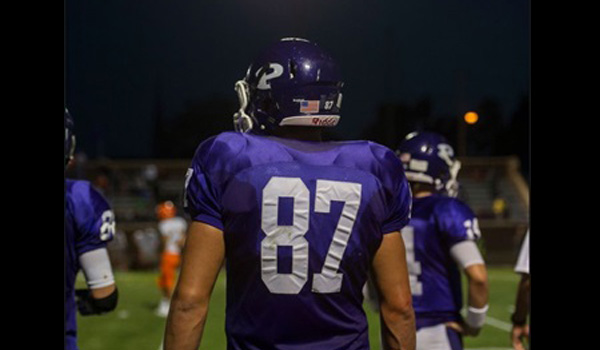 Several tight ends return after having big seasons in 2015. Check out who to watch in 2016. Stay tuned over the next few weeks as we will do this position by position. This list is alphabetical by last name, not ranked and not a recruiting list.

Berens will be a three year starter on both sides of the football for the Indians. He is a returning first team all-league selection from the Western Athletic Conference. He also made the list of top defensive ends returning and is one of the best throwers in track and field in Kansas.

Breckenridge has the size that recruiters are looking for and is expected to be a nice two-way player (TE/DE) for the Bluejays this season. He is an athletic tight end with a 4.75 40-yard dash time and 29.5 inch vertical. Junction City has several key players back in 2016. Cason is a big bodied tight end that also plays basketball for the Bluejays. He was a honorable mention all-league pick as a sophomore last season. JC features two tight ends that could be two of the best in Kansas this year.

Brown is out for football for the first time since his freshman year. He has looked great this summer and new coach Tony Crough expects Brown to have a breakout season in 2016. He definitely has the frame to attract college recruiters.

Budke had five touchdown receptions a year ago for the Trojans. He is also one of the top returning basketball players in 3A, earning second team all state honors in his class last season.

Duley was a two-way starter at 6A Joplin (MO) last season where he was an all-league performer. He is recieving FCS interest and should be one of the top football players in the Southeast Kansas area for 2016.

Although he has primarily been known as an all-state defensive end, Dominguez may be too valuable to use on just one side of the football in 2016. His offensive position is tight end and we expect Aquinas to use him more in this role in 2015 with the graduation of one of the best blocking tight ends in Kansas, Christopher Perez. Dominguez has committed to Iowa State to play defensive end.

Dugan was a first team All Central Plains League tight end as a junior last fall. Look for a breakout year for the athletic senior.

Eilert is a lighter end but has the height and is a big playmaker in the 8-man ranks. He has racked up over 900 yards receiving and 21 touchdowns over the last two seasons.  He was a first team all 8-man selection last fall at end.

Gallardo was the top tight end in the City League last season earning first team honors in 2015. He will be depended on heavily to help put the Golden Eagles into title conversation once again in 2016.

Garrison can block and he can catch the football. Mill Valley lost a cast of all-stars and he will be depended on heavily to help Mill Valley be in the conversation in 2016 after winning the 2015 state title.

Primarily used on defense last year he may be called upon to be used more on offense as a senior in 2016. Gleason features great size at 6’5” and 215 pounds. Miege is loaded in all spots for 2016.

Guidry is a big bodied blocking tight end that will be one of the top returning at the position in the Wichita area. He earned second team all-league honors last season.

Heath is a player that is a rising recruit in the Class of 2018. He features 4.70 speed and has a vertical leap of 33 inches. You should expect a breakout year for him in 6A this season. He also should be a major contributor as an outside linebacker on defense. Although he played wide receiver mainly in the past, tight end is where his future in college will be with added weight. He also had 46 tackles on defense last year.

We don’t know much about Hicks yet on the football field but that will change soon as the football season gets started. We expect him to be a big contributor to Wichita Northwest as a tight end and defensive end. Hicks received an offer from Oklahoma State in late July and should blow up this season. He features a vertical leap of 32 inches.

Hubert, a Kansas State commit at defensive line, also doubles as one of the top tight ends in the state. He had 237 yards receiving but is used primarily as a blocking tight end. He really shined on defense where he had 90 tackles a year ago. Hubert is an explosive athlete with great speed for his size. He was a first team All Non-Senior from Sports in Kansas in 2015.

The Northwestern commit is ready for a big senior season after earning Sports in Kansas All Non-Senior honors as a junior in 2015. He also made the list as a defensive end. Kent had 12 division one offers before deciding on Northwestern.

Leininger had 628 yards receiving last year with seven touchdowns over 11 games last season. With all-state QB Valentino Dellagado back expect another big year for the two.  He was also a first team All 4A-II basketball player last winter.

Nordell was an all-conference performer on both sides of the football last season. He is seeing interest from the FCS level and has offers at that level, including South Dakota. Nordell has nice speed for his size with a 4.7 forty yard dash. Expect him to have a breakout campaign and interest to rise for the 2017 prospect.

Pickert is an athletic tight end that is looking for a big senior year for the Thunder.  Pickert features a 4.66 forty yard dash time and a 34 inch vertical. He should be a nice target for KSU QB commit Sammy Wheeler.

Pickle is a rising prospect in the class of 2018 for Kansas on both sides of the football. He doesn’t feature elite speed but is a nice blocking tight end that can also play tackle. His college future may be on the offensive or defensive line.

Root, more known as a division one recruit at linebacker, also had another big year at tight end for the 3A state runner-up Spartans. Although more of a blocker he had four touchdown receptions in 2015.

VanCleave is one of the top multi-sport athletes in Kansas. He is also one of the top two-way football players in Kansas returning for 2016. He has earned all-state in baseball, basketball and football. He had seven touchdown receptions a year ago for the Longhorns who won the 4A-II state championship. On defense he racked up 78 tackles and 11 tackles for loss on defense.

Vanderslice is expected to play tight end and defensive tackle this year for Olathe Northwest. He definitely has the size that jumps off the charts. Expect him to contend for All-Sunflower league honors in 2016.

Wylie had 417 yards and eight touchdowns receiving last year for the Trojans. Osawatomie went 7-3 in 2015 and with the loss of Riley England will depend on players like Wylie for another successful season in 2016.

Also special thanks to Ben Mitchum for input in compiling this list. 26 tight ends are listed due to Junction City having two on the list that make it as a combo pick.