Sports in Kansas: 25 Defensive Backs to Watch for 2016 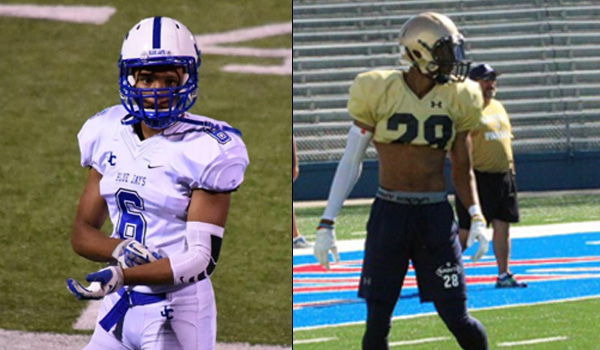 Several defensive backs return after having big seasons in 2015. Check out who to watch in 2016. Stay tuned over the next few weeks as we will do this position by position. This list is alphabetical by last name, not ranked and not a recruiting list.

Bicknell had one of the best years as a defensive back in 4A-II last season, earning All 4A-II honors and first team All-Area in Southeast Kansas. He made plays all over the field with 95 tackles, four interceptions, eight pass breakups, two forces fumbles and also took two punts to the house for touchdowns.  The Raiders return several pieces of their 2015 team that make them a contender in 4A-II this season.

Colbert may be the most talented player on this list and that’s why he had multiple division one offers before eventually committing to play football at Iowa. The senior defensive back transfers over from Winnetonka (MO) and is ranked as high as the #34 overall defensive back in the country for the class of 2017. Also expect Colbert to see significant action on offense. Miege is absolutely loaded with talent in 2016.

Donn will be a three year starter on the defense and had 76 tackles and three interceptions last season in earning 5A honorable mention honors for Mill Valley. He was a big part of the Jaguars defense that stepped up for them to win the 5A state title in 2015. Although several key pieces are gone, Donn will be relied upon heavily to keep the Jaguars in the mix of 5A for 2016.

It was too hard to leave one off and one on, so these two make the list as a combo and will be two of the top defenders in 3A this season. Esau will be one of the top two-way starters in 3A this season as he doubles as a QB with nearly 2,000 yards of total offense last year. He really stood out on defense where he intercepted five passes over his junior campaign. Vogt isn’t the biggest but he shows up on Fridays as an absolute stud, he had 108 tackles as a strong safety and stepped up big in 2015. He also had two interceptions and two fumble recoveries.

Flood was one of the top sophomore defenders in the EKL last season earning second team honors in the very loaded league. He had 71 tackles to go along with three interceptions. Along with Angel Dominguez and Jayden Russell, he will look to lead the Saints defense this season.

Harris has been a lock down corner for four years as a starter at Pittsburg High. He has twice been named All-League and All-Area and will be one of the top returnees in 5A this season. He is also a standout baseball player for PHS and features 4.5 speed in the 40-yard dash.

Huss may be the top two-way small school player in Kansas this season. He is a two-time all-state pick as a receiver after having over 700 yards in each of his last two seasons and was also an all-state pick as a defensive back last season. He picked off nine passes from his defensive back position and landed 60 tackles. Huss also rushed for over 700 yards last season and there’s not much he can’t do for the 2015 2-1A runner-up Trojans. He is also an all-state basketball and baseball player at the 2A level.

Igo was a first team All AVCTL-I pick last season. He was a part of a defense that went on to capture the 6A state title. Derby will be looking for its third state title in four years under Brandon Clark. The Panthers return several key pieces in 2016 and Igo will have to be a big part in helping his team to try and repeat.

Jones is one of the best multiple sport athletes in Kansas. His story last year was incredible as he broke his tibia in fibula in his right leg in October only later to get back on the wrestling mat and go 22-0 and win a 6A state title at 160-pounds a few months later. Pound for Pound he is one of the toughest kids on this list and was a first team All-Centennial league pick last season.

Kaufman is one of the fastest players in Kansas with sub 11 second speed in the 100 and sub 4.5 speed in the 40-yard dash. He picked off four passes and had 45 tackles last season. He can play multiple positions on offense as a utility back/receiver, returns kicks, and also blocks kicks. Keep an eye on this 2017 Athlete from Pratt in 2016.

Lautt is a hard hitting defensive back that patrolled the secondary for the Thunder a season ago. He was a first team All Non-Senior from Sports in Kansas as a junior last fall. He is also a two-time state wrestling champion in 5A and will be one of the top returning high school wrestlers in the country this winter. He has committed to wrestle for the University of North Carolina.

Moranz showed up big in 2016 and made plays all over the field on defense. He was a first team All-Centennial League pick as a junior and will be one of the top returnees in Topeka this season.

Murray is a threat on both sides of the football and is one of the top multi-position players back in Kansas for 2016. Last season he racked up 63 tackles, five for loss, and two interceptions from his safety position. He also helped lead the offense with 780 yards and seven touchdowns, while rushing for 470 more with eight scores. He has battled some injuries this summer but look for Murray to be full strength once the 2016 season begins.

Pauly picked off five passes last season for the Owls. He earned first team all-state honors in his classification and was also an all-league performer.

Remsberg is probably the fastest player in Kansas, along with Javon Baldwin of Junction City, when he is healthy. He has elite sub 4.4 speed that he has ran at several camps and combines. As a sophomore he was a two-time state champion in track and field in the 100 and 200 in 5A. It’s time for Remsberg to put the season together he is capable of. Although more known as a utility back on offense and return man, we expect him to have a great year as a defensive back in 2016.

You should expect Russell to have a breakout season this year in 5A for the Saints as a sophomore. He has already been offered by Kansas and should generate a lot more FBS interest once more coaches get the opportunity to see him in live games this fall. He will have his chance to prove himself as he plays in the always loaded Eastern Kansas League. Russell has 4.5 speed entering his sophomore campaign.

San Roman was a first team All-City League pick last fall as a junior for the Grizzlies. He is an athletic safety with speed in the 4.50 range. Northwest had a breakout year in 2015 and many pieces are back to think they could do the same thing once again in 2016.

Scott has 84 tackles and six interceptions over his last two years as a starter for the Bobcats. Expect the rising 2017 prospect to have another big year in 2016.

Smith had 103 tackles from his strong safety position in 2015. He was a force as a pass defender as he had four interceptions to lead his team. He also forced two fumbles as a junior. Look for another big year for Smith.

There’s not a lot that Swinehart can’t do on the football field. He racked up stats as a receiver, running back and quarterback in 2015. He also was one of the top defensive backs in 2-1A as he picked off four passes on his way to earning 2-1A all-state honors as a sophomore.

Taylor has 107 tackles and seven interceptions in his last two years as a starter at defensive back for the Jaguars. He was part of the 2015 4A-I state runner-up team and earned All AVCTL-II honors as a first team defensive back last season. Also a standout on the basketball court where he has averaged 14 points per game in each of the last two seasons.

It was too hard to pick between two players on the same team, so these two make the list as a duo. Thompson is an athletic defensive back with great size. He should be one of the top playmakers this season in the Sunflower League after earning honorable mention All-League honors as a junior last fall. Thompson has an offer from Stetson at the FCS level. Young was the lone junior on the Sunflower League first team as a defensive back last season. SM East has been loaded on the defensive side of the ball for the last three years and Young fit right into that mold last season. Along with teammate Thompson, SM East should have a very nice secondary once again in 2016.

Weber, who entered last season in a battle for the starting quarterback job with Carter Putz, eventually lost the competition and moved primarily to playing defense full-time. He didn’t disappoint as he was one of the top defensive backs in the state picking off six passes on the way to earning first team All Non-Senior honors from Sports in Kansas for the two-time 4A-I defending state champs. Brother Stanton played at Kansas State while his dad, Stan, also a former KSU player, is the color analyst for K-State basketball and football.