v Sports in Kansas: 25 Quarterbacks to Watch for in 2016 - Sports in Kansas 
Warning: include(../includes/bodytag.php): failed to open stream: No such file or directory in /home/kansass/public_html/ks/news/index.php on line 36

Sports in Kansas: 25 Quarterbacks to Watch for in 2016

Carter Putz of Miege and Will Bruna of Hanover each passed for over 3,000 yards in 2015. 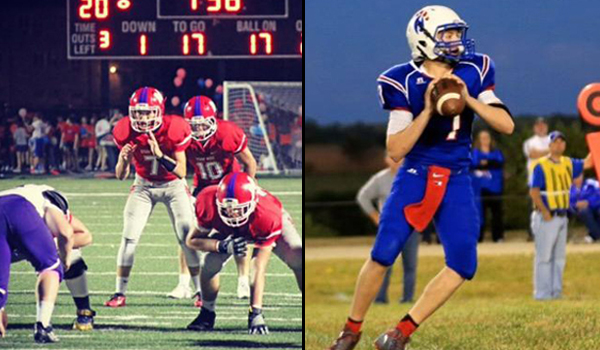 Several quarterbacks return after having big seasons in 2015. Check out who to watch in 2016. Stay tuned over the next few weeks as we will do this position by position. This list is alphabetical by last name and not a recruiting list.

Archer had a breakout sophomore season in which he threw for 2,150 yards and 16 touchdowns. He hasn’t shown a lot with his legs but his size and arm are not in doubt. He will be one of the top returning QB’s in the smaller classes of Kansas this fall.

Ast is a rising recruit as an athlete in the class of 2017 for the state of Kansas. He is the defending state champion in the 110 hurdles in Class 3A. Ast is big and can run and will do some damage on the football field in 2016.

Banks passed for 1,739 yards last season and rushed for 605 more. He returns his top target in senior Ben Murray, a first team Sports in Kansas All Non-Senior in 2015, so expect another big season for Banks.

Bruna rewrote the 8-man record books last season as a junior in his first season as a starting quarterback. He threw for an 8-man state record 3,452 yards and 56 touchdowns on the way to a runner-up finish in 8M-I. He also racked up 646 yards on the ground and another 18 scores. The all-state selection is also an an all-state selection in 1A-I basketball. Look for Bruna to have another big year.

Cowan is receiving a lot of recruiting interest and will look to be one of the top returning quarterbacks in the Topeka area for 2016. New coach, Glen O’Neil, the long-time successful coach at Scott City, has a lot of experience with good quarterbacks and the two should be a perfect combo in 2016.

Crittenden has some huge shoes to fill in that of Bryce Torneden, an all-state quarterback, who was signed as an Athlete at the University of Kansas. Crittenden transfers to Free State his senior year from Topeka Hayden where he passed for 1,385 yards and 13 touchdowns last season. He has great accuracy with a 61 percent completion rate. Although he isn’t quite the athlete that Torneden may be, he is surrounded with a nice cast of players to make his transition comfortable.

Degollado threw for 1,963 yards and 19 touchdowns last season while rushing for 791 yards and 10 more scores. He will be one of the top returning quarterbacks in the smaller classes of Kansas for 2016.

Dubbert may be from the smallest school on the list but it doesn’t take away from him being of the best multi-sport guys in Kansas. He threw 26 touchdown passes last season and over 1,300 yards. He is also an all-state high jumper with a best of 6’6” and is a two-time All 1A-II pick in basketball. He also racked up 65 tackles as a linebacker.

Dultmeier takes his wrestling mentality to the QB position and is a tough one at just 150-pounds, he finished third at 3A 138 for wrestling where he cuts weight in the off-season. He gets it done through the air with over 2,100 yards passing last season. He also had 491 rushing yards. Silver Lake is one of Kansas’ best programs and expect Dultmeier to be one of the top 3A QB’s this fall. You don’t have to be a division one sized or college recruit all the time to get the job done in Kansas high school football, Dultmeier is a great representation of that.

Greaser stepped up big in his first year as a starter at quarterback after replacing all-state selection Tristan Speer, as he threw for over 1,800 yards and 25 touchdowns to just two interceptions. There’s no reason to believe he won’t have another big year with one of Kansas’ top playmakers returning at receiver for Troy in senior Cuttar Huss. Troy was so close to a state title last year and Greaser was a huge part in getting them to the title game.

Bishop Carroll is known for consistently producing some of the state’s best quarterbacks in recent memory, so there should be no surprise if Howell has a breakout junior campaign in 2015. He entered last season as a third string QB and injuries put him into being a starter by the end of the year. If you’re the starting Quarterback at Bishop Carroll, you are expected to have a big year, we expect that out of Howell.  Howell has great athletic ability with a 30 inch vertical and some wheels with a 4.6 forty yard dash time. Carroll suffered more injuries than it can remember in 2015 and to show you how deep they are, they still ended up second in the state.

Luetters is the top returnee on one of the most consistent programs in the state. Also throw in that he earned first team All 2-1A honors as quarterback last season as passed and rushed for over 2,500 combined yards and 37 touchdowns.

Madzey is an athletic quarterback with great size that can get it done with his feet and his arm. He helped lead Eisenhower out of nowhere to the 5A playoffs and a berth in the state semifinals a year ago. He will be relied upon heavily this season and will be one of the top returning playmakers in Wichita for 2016.

McCullough is a more known as an all-state basketball player and missed last season because of injury in football. He has big expectations this year and a guy named Drew Bones in front to protect him. Expect McCullough to have a big year after earning All-Area and All-League honors as a sophomore two seasons ago.

Mlekus passed for a school recod 1,830 yards last season and threw 16 touchdown passes. Not only did he get it done through the air and bought a lot of time on his feet, he rushed for 797 yards and 11 more scores as a first year starter. Also an all-state defensive back, Mlekus is one of the toughest quarterbacks on this list as he placed third in the state in wrestling this past winter in 4A.

Murray passed for 1,703 yards and 14 touchdowns while rushing for 772 more and adding 17 scores on the ground. The senior dual threat returns his top target in senior Brice Lytle. Expect another big year for Murray and the Panthers.

Phillips passed for 1,568 yards last season with 21 scores through the air. He also added 430 yards and six touchdowns on the ground. He will be one of the top returning playmakers in 4A-I this season.

Putz helped lead the Stags to the 4A-I state title by passing for 3,187 yards and 36 touchdowns while throwing only five interceptions. Don’t expect much to change as they return two-time all-state WR Jafar Armstrong. A year ago, it was undetermined who the starter to replace Ryan Willis, now KU QB, would be, Putz answered that question pretty easily with his eye opening numbers in 2015. Putz has committed to play infield for baseball at Notre Dame. Expect the Stags to get the three-peat in 4A-I. Putz has a solid back-up as well in 2019 recruit Graham Mertz, who could end up being a division one QB before it’s all said and done.

Ruder may be the most heavily recruited player on this list and probably for the Class of 2018 in Kansas. After seeing him at state track, you would have thought he was a senior or in college the way he was put together. The 6’3” 195 pound junior has five offers at the FBS level including Kansas State. He features sub 4.5 speed, which he ran at the Ohio State camp, but is best known for his arm. He is a very explosive athlete and one of the top hurdlers in Kansas. How many high school quarterbacks can throw a discus 150 plus feet as a sophomore in high school? Ruder can. Norton brings back a solid cast of players and if Ruder can stay injury free we have them as a contender in 3A. We’ve heard about him since the 8th grade, now it’s his time to show us all the hype this season.

Schneider may not be on the best team in Kansas, but it doesn’t stop him from putting up big-time numbers in one of the best leagues in Kansas. The Sunflower League Quarterback threw for 2,412 yards and 19 touchdowns last season. Schneider has been a starter since his freshman season for the North High Indians.

Sporing is one of the top returning 8-man players and makes this list because of the season he had in 2015. He passed for over 1,800 yards and 32 touchdowns last fall as a sophomore in leading the Burlingame to its first semifinal appearance since the 1970s. He also rushed for 14 touchdowns and 632 yards.

Sullivan is a true dual-threat and was one of the best sophomores in Kansas last season. He accomplished the rare feat of rushing and passing for over 1,000 each last season. He threw for 1,281 yards and 15 TD’s on the year while rushing for 1,069 and 15 more. Expect another big year for Sullivan.

Thomas impressed many at the quarterback position in his first season as a starter since moving over from receiver after his sophomore year. He nearly passed for 1,000 and rushed for 1,000. Thomas is a hard-nosed true athlete that is a dual-threat quarterback and should expect another big season in 2016. Thomas was a first team All-City pick from the Capital-Journal last fall. Topeka High has been loaded at the quarterback position over the last five years and Thomas has filled the shoes nicely.

Trapp is one of if not top returning signal caller in the Centennial League after earning second team All-League honors as a junior last fall. He will look to have an even bigger season in 2016.

Although Wheeler didn’t start at quarterback last season it doesn’t mean that he isn’t primed for a big senior season. The recruiters have noticed and he landed a Kansas State offer recently. Expect Wheeler to have a breakout season in 2016.