v Sports in Kansas: 25 Defensive Lineman to Watch for 2016 - Sports in Kansas 
Warning: include(../includes/bodytag.php): failed to open stream: No such file or directory in /home/kansass/public_html/ks/news/index.php on line 36

Sports in Kansas: 25 Defensive Lineman to Watch for 2016

Angel Dominguez of Aquinas was a first team All Non-Senior in 2015. (Photo: Susana Photos) 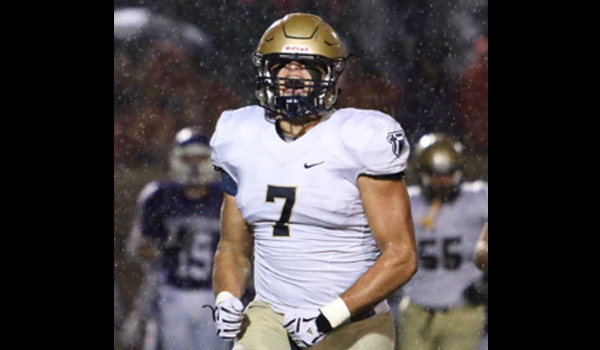 Several defensive lineman return after having big seasons in 2015. Check out who to watch in 2016. Stay tuned over the next few weeks as we will do this position by position. This list is alphabetical by last name.

Berens who is one of the best throwers in the state in track and field is also a very talented football player. Berens has been a standout at Hays since his sophomore year. He is a two-time all first team WAC performer for the Indians and also doubles at a tight end on offense.

Birch was a force in all nine games last season for the Titans as he picked up 16 quarterback sacks from his defensive end position. He tallied 54 total tackles last season and will be one of the top playmakers to watch in 6A this season.

Blackburn is a returning all-state selection in 4A-II for Holcomb. He helped anchor down a defensive line that went on to win the 4A-II state championship. Along with Conner VanCleave and Dillon Williams, Holcomb should have a very solid defense once again in 2016.

Brown helped lead the Tigers defense into the 5A semifinals as a junior in 2015. He earned first team All AVCTL-II honors on the defensive line.

Chesterman isn’t the biggest player by any means in the state at his position, in fact one of the smallest on the list but it doesn’t stop him from being one of 6A’s best. Chesterman was a first team All AVCTL-I pick last season for the Salthawks.

Copeland was one of the top sophomores in the state last season and earned first team All AVTCL-IV honors for the Spartans. He helped lead a defense that took state runner-up in 3A last season. Collegiate moves up to 4A-II this season and will depend heavily on Copeland on both sides of the football. His older brother, Mitch, is a defensive tackle for Kansas State and was twice an all-state selection for Collegiate.

Cottenmyre was a first team All 2-1A pick last season as a junior for Republic County. He features a bench press of over 340 pounds and will be one of the top small school returnees for 2016.

Dominguez will enter his senior season as a three year starter on the Saints defense. The Iowa State commit is one of Kansas’ best and will look to lead the Saints back to the 5A state title game this season, a place they were just two years ago.

Elliott had a breakout sophomore season in which he earned All-WAC honors and honorable mention 6A honors at defensive line. He was the lone all-league sophomore on the WAC First Team. Elliott features great quickness off the ball and squats 500 pounds.

He has earned all-state as a sophomore and junior on both sides of the football and will split time this season at defensive line and linebacker. He will primarily play linebacker but will play on the defensive line in many sets, making him one of the best defensive combo players in the state. No matter where Green is at you will notice his presence.

Haley was an all-state pick in 4A-I last season and is one of the top returning defensive lineman in the state. He has 44 career tackles for loss and will enter his senior season being a four year starter for the Redmen. Haley registered 64 tackles and seven sacks over nine games last season from the defensive tackle and end positions. Haley is a sleeper in the recruiting game and could generate a division one offer this season.

Although more of a force on the defensive line, Hastings is primed to make his third straight all-state team on the line. He has been a big reason the Chargers have made two playoff runs in 4A-II the last two seasons. Hastings was a first team All Non-Senior from Sports in Kansas last fall.

Heit was a first team All-City pick last season as junior and was named the city Newcomer of the Year by the Capital-Journal as a sophomore. Heit doesn’t feature the best size in the world but that hasn’t stopped him as he racked up 105 tackles last fall for the Wildcats, who will now compete in 4A-II this season.

Hubert is a physical presence at defensive end and is one of the top returnees in Kansas for the 2016 season after racking up 90 tackles, 24.5 tackles for loss and 11 sacks in 2015. The 2017 DE/TE committed to Kansas State just days after being offered. Hubert is a weight room warrior with a bench press of 340 pounds and deadlift of over 520 pounds. He also features a 31 inch vertical and has 4.75 speed in the 40-yard dash at 255 pounds. He was a first team All Non-Senior from Sports in Kansas last fall.

Jacobs was a first team All 2-1A pick for the state champion Panthers last season. This season Phillipsburg moves up to 3A but Jacobs is still expected to be one of the top defenders in that classification.

Kent, who may be the top football prospect in Kansas for the class of 2017, may be more known as a high school tight end but doubles as a defensive end, where he is also being recruited at for college. The senior, who had double digit division one offers, has committed to Northwestern where it is still unknown if he will play offense or defense. His versatility and size could have him playing a variety of college positions including offensive line, tight end or defensive end. He was a first team All Non-Senior from Sports in Kansas last season. Kent features elite speed for his size with a 40 time in the 4.8-4.9 range.

Klug has over a hand full of offers from the FBS and FCS levels as a DE and DT. He was part of a BV North team that went 2-7 in 2014 to 8-2 last season. Expect major interest to rise for the class of 2017 lineman this season. Although more known as a defensive end, he should still be one of the best on the offensive lineman in Kansas for the 2016 season.

Linn stars on both sides of the football for the Bluestreaks but is best known as a defensive lineman where he was a first team all-state pick in 3A last season. Linn is a nice athlete with a great speed/size combo with a 40 yard dash time in the 5.0 range, bench of 350 pounds, and vertical leap of 32 inches. Linn will be one of the top returning small school lineman in 2016.

Mabry was a first team All-Centennial League pick as a junior last fall for the Bluejays. He also earned honorable mention honors in 6A. He will be one of the top defensive line returnees for 6A this season.

Mills is a great athlete and doubles up as he makes the top 25 on offense and defense. The Kansas State commit is not just a football player either, he took second in the 5A shot put this past spring. Expect another big year for Mills, who earned All AVCTL-I honors on both sides of the football last season.

Usher-Pearson was one of the most dominating lineman in 4A-I last season and is one of the best players in the Southeast Kansas League. He helped lead the Bulldogs to a 4A-I playoff berth last season. He can play both defensive end and tackle. Usher-Pearson, who has packed on some weight this season, and teammate Seth Stroble should form one of the better DL duos in Kansas this season.

Pickle is a rising prospect in the Class of 2018 in Kansas on both sides of the football. He is versatile and can play offensive line, tight end, defensive tackle and defensive end. The junior was one of the very few sophomores in 3A to earn All-State honorable mention in 2015. Expect a breakout year for Pickle.

Riddeaux is one of the more undersized lineman in the state but makes big plays from his nose guard position. He had 59 tackles last year and 12 of them went for loss. Great Bend has several pieces back for 2016 from a nice season in 2015.

Football may be his third best sport but it doesn’t stop him from being of the best at his positions (DE/TE) in Kansas. Last season he racked up 78 tackles (11 for loss) for the 4A-II state champion Longhorns. VanCleave was also the 4A-II player of the year in baseball as a junior and is a two-time all-state pick on the basketball court.

Walker was a first team All Non-Senior from Sports in Kansas last fall and also earned All-6A honors for the state champion Panthers. Walker is seeing division one interest and will be one of Kansas’ best play makers on the defensive side of the football once again in 2016.

Special thanks to Ben Mitchum for being a contributor to this list.