v Sports in Kansas: 25 Offensive Lineman to Watch for 2016 - Sports in Kansas 
Warning: include(../includes/bodytag.php): failed to open stream: No such file or directory in /home/kansass/public_html/ks/news/index.php on line 36

Sports in Kansas: 25 Offensive Lineman to Watch for 2016 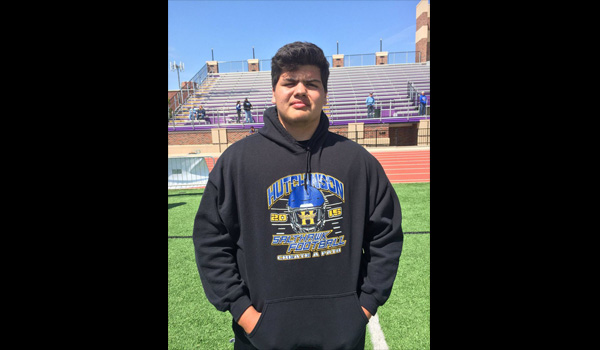 Several offensive lineman return after having big seasons in 2015. Check out who to watch in 2016. Stay tuned over the next few weeks as we will do this position by position. This list is alphabetical by last name.

Adler jumped onto the recruiting scene in the spring of 2016 and was offered by Kansas State, where he committed to play. A former transfer from Winfield, he shows great athletic ability for his size and also plays baseball and basketball.

Bones shows great explosion and picks up blocks at the next level. He has received offers from the FCS and Division II levels in Kansas and could be a player to generate an FBS offer this season. Bones is a first team All-Frontier League performer.

Burnett was an honorable mention pick in 4A-I last season for the Crusaders.  He was also a first team all AVCTL-IV pick in 2015 as a junior.

Clark was the lone sophomore offensive lineman that was a first team AVCTL-I pick last season. Clark has great speed for a lineman with a 40 time around five seconds.

Clark is one of the bigger lineman in Kansas and also one of the strongest. He benches over 400 pounds and has a squat of 585 pounds. Clark plays offensive tackle and doubles as a nose guard on defense.

Creed, a Kansas State commit, came onto the recruiting scene in the spring of 2016 with his impressive size. He also helped pave the way for RB Ian Rudzik last year, who is now at Kansas State. Creed joins Adler, Mills and Rivas rounding out the Kansas high school OL that signed with Kansas State.

Gilbertson, who has committed to Kansas, helped pave the way for the offensive attack of Wichita Northwest in 2015. He was a first team All Non-Senior from Sports in Kansas last season.

Green is one of the most physical players in Kansas with a great motor. He has weighed up to 250 pounds but lost weight to be more of a force at linebacker on defense. Although more known as an all-state selection in the past on defense, where he has played defensive tackle and linebacker, he will also be one of the top OL in Kansas for 2016. The only thing hurting Green in the recruiting game is his size, but someone will land a nice player at the next level.  He has earned all-state as a sophomore and junior on both sides of the football.

One of the more underrated players in the state because of his size is one of if not Kansas’ top high school lineman in the Class of 2017. Grunhard has been a starter on two consecutive state championship teams as center. He has an offer from Air Force and several other smaller school offers. He was a first team All Non-Senior from Sports in Kansas last season. His father, Tim, played with the Kansas City Chiefs and is now an assistant at Bishop Miege.

Houk was an honorable mention all 6A pick last season and is primed for a big senior season for the Firebirds, who are one of the most consistent programs in Kansas. Houk earned All-Sunflwer League honors last season as a junior.

Although more of a force on the defensive line, Hastings is primed to make his third straight all-state team on the line. He has been a big reason the Chargers have made two playoff runs in 4A-II the last two seasons.

Hutchison is the defending 5A state wrestling champion at 220-pounds, where he cuts weight for wrestling season. He was also one of the top lineman in Southeast Kansas last season, earning first team All-Area and All-League. Pittsburg will play an independent schedule in 2016, but Hutchison is one of the best returnees on the line in 5A.

Jay was the 4A state heavyweight wrestling runner-up this past winner and was also an All-4A pick on the offensive line last season. He will be one of the top returnees in his classification this season.

Kirby is the best returning offensive lineman on a team that consistently produces lineman to the division one ranks. Kirby has FBS and FCS offers. He was a first team All Non-Senior from Sports in Kansas last season.

Klug, who didn’t play offense last season is expected to go both ways this season and has gained over 15 pounds, has over a hand full of offers from the FBS and FCS levels as a DE and DT. He was part of a BV North team that went 2-7 in 2014 to 8-2 last season. Expect major interest to rise for the class of 2017 lineman this season. Although more known as a defensive end, he should still be one of the best on the offensive lineman in Kansas for the 2016 season.

Martinez was an All-WAC selection last season and earned honorable mention honors in 6A. He is one of the top returning Western Kansas lineman for 2016.

Mills burst onto the recruiting scene in the spring of 2016 and received a Kansas State offer, where he would commit a few days later. He was a second team AVCTL-I pick last season at OL.

Murphy is one of the more underrated OL prospects in Kansas but is one of the top returning lineman in 4A-I for the 2016 season. Murphy was an All 4A-I honorable mention pick in 2015 as a junior. He also doubles as a defensive lineman for the Bobcats.

Peine is one of the more underrated players in the state but shows great athletic ability also playing basketball and throwing in track and field. He is a raw talent that should develop into one of the top lineman in Kansas for 2016 season. He features a bench press of 400 pounds and runs a 40 in the 4.9-5.0 range. With improved footwork and added weight Peine could land a division one offer this season.

Picou is one of the top returning lineman in 6A for the 2016 season. Not only is he a standout lineman he also took second in 6A wrestling at the heavyweight division this past winter as a junior.

Rivas, who had multiple FBS offers and is the top ranked lineman in KS based on several recruiting sites, is a KSU commit that has started at Hutch since his sophomore year where he played on the 2014 state runner-up squad. He was a first team All Non-Senior from Sports in Kansas last season. Rivas did 30 reps on 185 bench at the Sharp Performance Combine back in May.

Seck is a South Dakota commit that came onto the recruiting scene late this summer. He bench presses 325 and squats 535 pounds. He will look to lead the Panthers rushing attack again in 2016. The Frontier League is always loaded at the OL position with talent and Seck definitely helps that case out in 2016.

Shields is primed for a big season in 6A and is possibly the best returning lineman in the Topeka area after earning First Team All-City league honors last season.

Swenson is also an all-state track and field athlete in the throws for the Eagles. He has great explosion and footwork and has been a four year starter at Maize. He was a first team All Non-Senior from Sports in Kansas last season.

Zars is one of the top returning lineman in 5A and has offers at the FCS level. He helped lead the Jaguars to the 5A state title as a junior in 2015. He was a first team All Non-Senior from Sports in Kansas last season.

Also special thanks to Ben Mitchum as a contributor to this list.