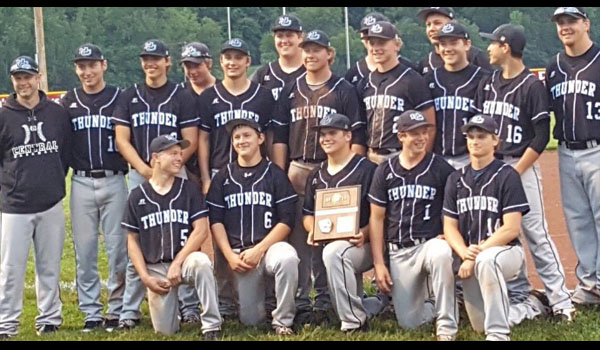 When it came time to pick an individual for athlete of the month it was too difficult to pick over what the Nemaha Central baseball team did by capturing the 3A state baseball title on Saturday May 28th. For their effort they have received the Rainbow Communications Athletes of the Month from the Northeast Kansas area.

Nemaha opened up first round play at the state tournament with a 7-1 win over Royal Valley in Manhattan in a game they didnt have much trouble with. The Thunder had a tight one in the semifinals on Friday May 27th as they beat 3A power Wellsville 2-1 with a walk-off RBI double by Kyle Kramer. The hit would put NC in their first ever state championship game for baseball in just the fourth year in program history. It was also the first time Nemaha had ever made it to the state baseball tourney.

In the championship against Whitewater-Remington, the Thunder jumped out to a 5-0 all the way up to the fourth inning with RBIs from Neil Sudbeck, Dylan Schraad, and Dalton Hiltibrand. Whitewater would put up four runs in the fourth but it wasn't enough as Nemaha Central claimed their first ever state baseball championship with a 5-4 victory. Ryan Hasenkamp picked up the win with Schraad coming on in relief in the fifth.

Nemaha Central finished 23-1 on the season and won their last 18 consecutive games to capture the 3A state title. Rainbow Communications wants to congratulate head coach Terry Stueve and the Thunder on their state championship season. The Thunder had two players named to the 2016 KBCA All-State baseball team in 3A including senior first baseman Kurtis Niehues to the first team and freshman third baseman Austin Gerety to the second team.

Nemaha Central didn't only get it done on the baseball field, the boys & girls track and field team both took third place in Wichita on the same day the Thunder won the state baseball title. The boys team was paced by junior Jacob Koelzer, who took first in the long jump and 100 meter dash, while placing second in the 200. The girls picked up a state championship from Allison Rotinghaus who won the 3A triple jump. Kaley Dailinghus was also all-state in three events placing in the top three of all three of her events (javelin, shot, discus). She took second in the shot, while she got two thirds in the javelin and disc.

The Rainbow Communications area also had some other state champs at the state outdoor including Elizabeth Kettler of Hiawatha (3A 3200), Faith Little of Jackson Heights (2A 800,1600)