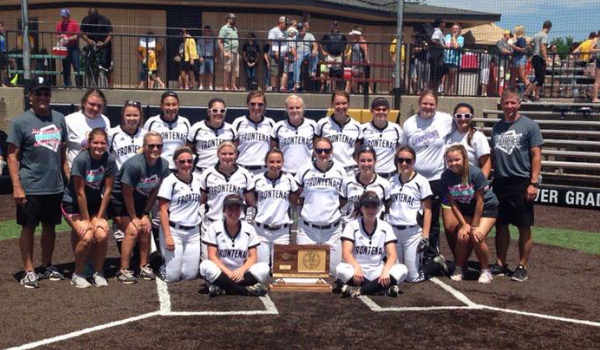 The Frontenac Raiders earned the Craw-Kan "Your Community Technology Partner" Team of the Week from the Southeast Kansas area after winning their first ever state title in softball in Sunday at the 4A-II state championship in Emporia.

"Our team played lights out in the tournament. I am so proud of them, I love these kids for who they are on and off of the field and am so incredibly thankful to be a part of this." Frontenac head coach Cassie Rhuems said.

Lights out in the tournament is correct as the Raiders rolled to three wins at the state tournament by beating Prairie View (6-2) in the first round, Chapman (10-0) in the semifinals and Haven (13-5) in the title game. The Raiders, who play in the very competitive CNC League, were the seventh seed entering the state tournament. All seeding can be thrown out at state tournaments as it's only based off of record.

The Raiders had 13 runs on 20 hits in the championship. Kaylee Harper led the offensive charge for the Raiders with two home runs and three RBI in the title game. Taylor Peterson was also huge as she went 4-for-4 on the day and scored three times. Shelby Blythe opened the game up for the Raiders with a grand slam to extend the lead to 8-2, before Kamryn Osborn and Kayla Meyer had run scoring hits in the sixth to make it 11-2. Madison Davis hit a two run homer in the seventh to make it 13-2. Kennedi Fields, who had a 1.84 ERA over the tournament, got the win in the circle as she allowed five runs, three earned on eight hits in the title game. Fields also got it done with her bat as she picked up three hits. Emily Merando, Gwen Smalley and Meyer also added two hits for the Raiders.

Frontenac only loses two players in two seniors that they graduate, Fields and Merando, as the rest of the team will be back to defend their 4A-II title.

"There are 20 young women who literally made a dream come true for me." Rhuems said.

It marked the first state title at Frontenac High School since the baseball team won state in 3A back in 2012. Three other teams from the CNC league also came away with state titles this spring with Riverton in 3A softball, Colgan in 2-1A baseball and Baxter Springs in 4A-II baseball.