v Faces in KS: Kourtni Hubert of Beloit - Sports in Kansas 
Warning: include(../includes/bodytag.php): failed to open stream: No such file or directory in /home/kansass/public_html/ks/news/index.php on line 36

Hubert pictured left at Clifton-Clyde after a state title and now at Beloit on the right. 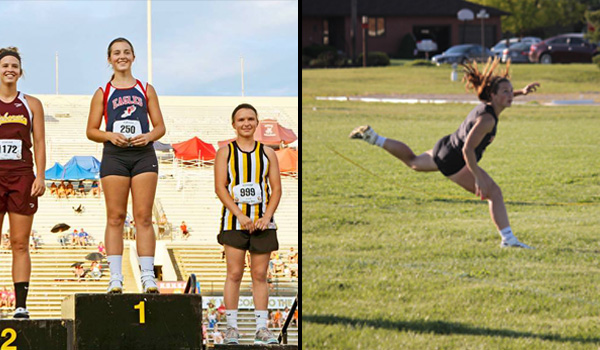 Kourtni Hubert set the 1A meet record in javelin for Clifton-Clyde last May as sophomore in Wichita at 141-06, to capture the 1A state title. Hubert now competes for Beloit, a 3A high school that she moved to for her junior school year in 2015-2016. She now has her eyes set on another javelin state title and record, but now in a new classification.

"I moved to Beloit because my dad got a new job that required us to move. The biggest difference so far from 1A to 3A is a bigger team and more coaches." Hubert said.

Hubert is an elite javelin thrower as she ranks #1 in 3A this season with a PR of 145-03.75, which is good enough for #22 in the United States. Hubert is ranked eighth among all juniors in the United States this season. Not too bad for someone who picked up the javelin just a little over two years ago in March of 2014. In fact, in her first season she captured the 1A state title at 131-07 just two months after throwing it for the first time in a meet. Only two girls in Kansas history have ever won the javelin four times at the state meet in four years, Lachelle Hartley of Horton (1987-1990) and Dani Plank of Gardner-Edgerton (2010-2013). Hubert is on pace to do so with two meets remaining, but would be the first to do so at two different schools.

"We didn't have javelin in junior high, so I first started throwing as a freshman." Hubert said.

State meet record in 3A of 148-01 by Elizabeth Herrs of Rock Creek in 2012 will be within reach for Hubert this weekend. Herrs is now an All-American javelin thrower at Oklahoma. Hubert will compete in the 3A girls javelin at 1:15 p.m. on Championship Saturday. Hubert's regional mark was over six feet better than anyone else in the field, but do expect some competition as three throwers besides Hubert registered a 127-foot throw or better at regionals.

"My goal is for another state championship and to set a meet record. I hope to have done better than I have ever done this weekend." Hubert said.

Hubert is also entered in the shot put where she took second at regionals last week with a toss of 38-09.25. She enters the event ranked fourth in 3A off regional marks, right behind teammate Sydney Johnson (39-11.25). We caught up with the outstanding junior thrower below.

Special Thanks to S&S Drug in Downtown Beloit for powering this feature.

How long have you been throwing javelin?

Where I used to go to school (Clifton-Clyde) we didn't have javelin in junior high. So I started my freshman year. It was something new and I wanted to try it.


What made you come to Beloit?

My dad got a new job in Beloit that required us to move.

What is it like to set a state record?

It was exciting! But mostly I felt accomplished. All the hard work I put in that year paid off for that record. It lifted the stress and anxiety off my chest. It is something I will never forget.

Is there a better atmosphere than that of state track?

To me no. I have been to the KU Relays but it doesn't beat state track atmosphere. Every time I walk into the stadium I get butterflies in my stomach. It's almost an indescribable feeling.

What have you done this off-season to become a better thrower?

I would throw here and there but mostly I was busy with summer volleyball, basketball, and work.

What has been the biggest difference competing at a 3A school from a 1A school?

The biggest difference to me is a bigger team and more coaching abilities.

Yes I play volleyball and basketball.

What is your goal this weekend?

My goal is to gain another state title and state record. I want to do better than I have done before this season.

Plans at the next level, any offers or who is recruiting you?

I plan to go to college for track and major in physical therapy. I haven't received any offers.

I don't really have a favorite subject but if I had to choose I would choose psychology/sociology. I just took it this year and it was one of the funnest classes. It teaches you how everyone thinks and the reasons why they do. It's a really interesting class.

What advice would you give to someone wanting to start throwing the javelin?

I would tell them to not give up. When I first started throwing it was frustrating. It is a hard thing to get a hang of. I almost just gave up and tried a different event but my parents told me to keep trying it will come to you and it sure did.  It takes time to learn and become good at, but just don't give up.