v 30 Boys to Watch at the 2016 State Track and Field Meet - Sports in Kansas 
Warning: include(../includes/bodytag.php): failed to open stream: No such file or directory in /home/kansass/public_html/ks/news/index.php on line 36

Ian Rudzik of 4A Ulysses has the best shot and disc throws in all classes KS. (photo: Chet Kuplen) 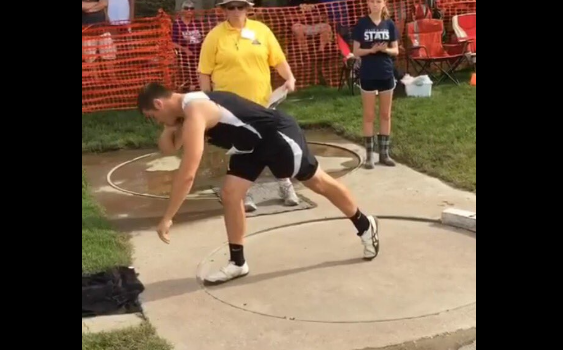 (Alphabetical by last name, not in ranked order)

Allen is ranked #1 in the United States in the javelin this season at 221-03. The throw ranks fifth all-time in the state of Kansas. 6A state record will be a tough one to catch with Johannes Swanepoel going 238-04 back in 2010.

Ast and Berens have some of the top marks in Kansas, but will be in a field with Ian Rudzik of Ulysses who has the top discus and shot put marks in all of Kansas. Ast, who was the nation’s top javelin thrower in 2016 had surgery last summer and hasn’t fully recovered to throwing like he did in the javelin, although it has not slowed him down in the discus (173-04) and shot (55-09.5). Both marks are in top five in Kansas this season. Berens ranks third in all classes of Kansas in the shot (56-0) and discus (171-03.75). The top three discus marks in all classes of Kansas this season are all in 4A. With Ast, Berens and Rudzik in the 4A throws, we will have some competition.

Birch has won the last two 5A 110 hurdle titles but is now down to Class 4A this season. Birch will have competition in the 110s with Jacoby Greenwood of Osawatomie, last year’s 4A 110 champion. Birch won the race between the two at the KT Woodman Meet in Wichita earlier this season. Birch will also be a contender in the 300 hurdles and long jump, where he has the second best qualifying jump. The all-state running back has signed with Illinois State for football.

Bledsoe, an Oklahoma football signee, ranks #2 in all-classes of Kansas and number one in 5A in the shot at 56-07 this season. Bledsoe could also contend in the discus as he has a season best mark of 147-08.

A name we have been seeing since he was a freshman in 2013, Davied is now a senior competing at his final high school meet for Girard. He has a season best of 6-foot-10, a height he also accomplished last season. Davied won 4A high jump as a freshman and sophomore, before taking second last season. Davied went 6-foot-4 last week at regionals and will need to better that mark for a chance at a third state title in a loaded 4A field that has three others over 6-feet-6 this season. Logan Weakley of Augusta, who had a 6-08.50 mark this season, was injured earlier this season and will not be in the field.

Green, just a sophomore, is already one of the best hurdlers in Kansas history.  Green has the top two times in the 110s and 300s this season at 13.83 and 37.04. He is also going to state in the long jump, where he went 22-08 at regionals. Green is also part of the 4x400 relay team that will contend for a state title.

Greenwood was one of the top overall performers at the 2015 state outdoor as a junior by capturing titles in the 110 hurdles, 300 hurdles and 200 meter dash. He has a season best of 14.20 in the 110 hurdles, which ranks second in Kasnas, while his 300 meter hurdle time is fifth in all-classes. Greenwood will have some serious competition in the 110s as he lost to Jordan Birch earlier this season at the KT Woodman Invite in Wichita. We will have a race in 4A 110s.

Griffin is one of the fastest sprinters in Kansas this season with a time of 10.66 in the 100 and 22.19 in the 200. His 100 FAT time is tied for the fastest in Kansas with J.D. Woods of Lawrence. Griffin will be the favorite to repeat as state champion in the 4A boys 100 meters but we will have a race in the 200 with defending champion Jacoby Greenwood of Osawatomie in the field, and Hunter Kaufman of Pratt who registered a 22.03 at the Ulysses regional last week.

Hines enters the state meet with the top triple jump of all classes of Kansas at 48-01 this season, which he registered at the Salina Central Invitational in early May. Hines long jump of 23-11 ranks second in all classes of Kansas this season. He will compete with Isaiah Simmons of Olathe North for the 6A title in the long jump and will be the favorite to win the 6A boys triple jump.

Kennedy’s vault of 15-07 this season ranks #1 in all classes of Kansas. He went 15-00 at regionals last week and is two feet higher than the nearest competitors regional qualifying mark. Kennedy is the defending 5A state pole vault champion.

Osen doesn’t make the list for being a favorite this season like he would in the past. He has missed nearly the entire season because of an ACL injury and if his name sounds familiar it’s because he set the 3200 state meet record in 4A two seasons ago. It will be interesting to see how he competes since coming back from the injury to go after the 3200 title for the third consecutive year. Osen also won the 1600 last season but will not compete in the field this season. He has posted a season best of 10:00.91, but will need to run his best time of the year to be a contender. Osen’s best time is 9:13 in the 3200 ran at last season’s KU relays. Regardless of Friday’s outcome for Osen, he has had a remarkable career in 4A boys cross country and track.

Ruder, a sophomore, who is a rising quarterback prospect in the Class of 2018 in Kansas, is also one of the best track and field athletes in the state. His 300 hurdle time of 39.61 ranks #1 in 3A this season and #8 in all-classes of Kansas. Ruder also has a 15.32 in the 110 hurdles. Ruder, a rare high school quarterback who throws discus, will also contend for the state title in the disc, where he goes into state ranked third on regional seeding at 150-06, however top distance is just one foot away from his top mark. He is also a leg on the Norton 4x100 relay, which ranks #1 in 3A at 43.49. Look for Ruder to bring home four medals this weekend and potentially a couple state championships.

Rudzik, a Kansas State football signee, is one of the best overall track athletes in the state of Kansas. His shot put (61-04) and discus (186-00) rank #1 in Kansas all-classes this season. Rudzik, who also qualified for state last season in the 100 meters, just missed it this year by finishing fifth at regionals. Rudzik, who stands 6-foot-3 and weighs 230 pounds is a rare combination of speed and size. He joined rare territory this year when he became a high school running back that throws over 60-feet in the shot, others on that list: Lance Lewis (Scott City), Mark Simoneau (Smith Center), Monty Beisel (Victoria/Douglass), all who went on to play Division I Football and two who went to the NFL.

Simmons, a senior who is headed to Clemson to play football, is one of the best long jumpers in the United States this season. His season best of 24-05 ranks #1 in all classifications of Kansas this season. He has won the last two 6A long jump titles. He will also be a contender in the 200 meters as he has ran a 22.02 this season to rank near the top in Kansas.

Toogood enters as one of the best throwers in the state and could contend in three different events for state titles this weekend. He has the best javelin throw in 2A at 198-04, which ranks fourth in all classes of Kansas. He is also the top ranked shot put thrower by regional mark at 52-07 for 2A and has qualified in the discus. Toogood is also an all-state basketball and football player and has signed to play football at Pittsburg State.

Wolfley ranks fourth in the United State for the javelin this season at 210-06, which is second in Kansas this season behind Trenton Allen (221-3) of 6A Derby. With a good toss he will be in contention for the 3A meet record set last year by Brett Thompson of Erie at 201-07. Wolfley, a Minnesota signee, will also be a contender in the 3A boy’s discus (151-02). He just missed qualifying for the shot put as he took fifth at regionals.

Woods, a senior, has ran the top FAT time in Kansas this year at 10.66 (tied w/ Griffin of Miege) and will be the favorite to win the 6A boys 100 meter dash after taking second last year to Free State sophomore, Avin Lane, who has moved to North Carolina. Woods could pick up a sweep as he enters with a 21.87 in the 200 meters. Woods, a Missouri Western football signee, is a two-time all-state running back for the Chesty Lions.

Many more to watch: