v Sports in KS: 2016 Girls Basketball Players of the Year - Sports in Kansas 
Warning: include(../includes/bodytag.php): failed to open stream: No such file or directory in /home/kansass/public_html/ks/news/index.php on line 36

Sports in KS: 2016 Girls Basketball Players of the Year 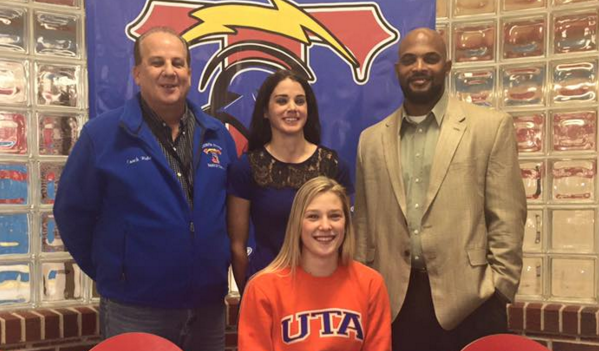 2016 Sports in Kansas Girls Player of the Year Honors

Player of the Year Capsules

You can’t go wrong with picking a player of the year in Kansas in 2016 whether it’s Ericka Mattingly or Kendrian Elliott of Wichita South (Kansas Gatorade POY), but it’s Mattingly who takes home top honors from Sports in Kansas after her incredible 96-4 career and four straight state titles at South. Mattingly, perhaps the most balanced player in Kansas, did it all over her four years at South and had a huge senior season in which she averaged 11 points, six assists, four rebounds and four steals per game. What’s most impressive of her stat line, South players didn’t get the opportunity to put up huge stats as their average margin of victory was 33 points in their perfect 25-0 run this season. Mattingly has signed to play at division one UT-Arlington.

Knoth earned second team all-classification honors from Sports in Kansas and first team 5A honors after averaging 18 points per game over her junior season. The 5-foot-10 junior helped her team to a 19-6 record and fourth place finish at the 5A state tournament in Topeka earlier this month. Knoth was also the MVP of the AVCTL-I league this season.

Mitchell, a Nebraska signee, put up some of the best numbers in Kansas this season by averaging over 21 points, seven rebounds, and nearly three blocks per contest. The 6-foot-2 senior can also go deep as she hit 48 percent of her three point shots this season. She helped Wellington (24-1) to a third place finish in 4A-I as she scored 62 points over three state tournament games.

Lenherr helped the Wildcats to a second place finish in the 2016 4A-II state tournament in Emporia. She averaged 17 points per game this season as Hayden finished with a 21-4 record. Lenherr, a multiple sport all-state athlete, is also a first team all-state selection in soccer and has won two state titles in the sport at Hayden. She will play soccer next year at Emporia State.

Comley helped Sterling to a fourth place finish in the 2A state tournament in Manhattan a few weeks ago and did so by scoring 59 points in three tournament games. Comley scored nearly 1,600 career points at Sterling and averaged 19 points per game this season. She will play at Sterling College next season.

Phelan, who also earned 2A POY honors last year, averaged 12.8 points per game on the way to a perfect 26-0 season and 2A state title in 2015-2016. The Oilers have went 96-4 with Phelan as a starter and 77-1 over the past three seasons with three straight state titles under head coach Pat Stiles. Phelan, along with her teammate Taylor Rolfs, is a first team All-2A selection for the third year in a row. She will play basketball at Washburn next season.

Henry averaged 20 points, nine rebounds and three steals per game for Waverly (23-3) this season as they finished second at the 1A-I state tournament in Dodge City. Henry, who scored over 1,000 career points at Waverly, is a repeat first team selection on the 1A-I all-state team as she earned first team honors in 2015.

Heinen, a 5-foot-8 senior, averaged over 18 points a game this season for Axtell. She led her team to a 22-4 record and finished second at the 1A-II state tournament in Dodge City this season. Heinen scored 1,078 points in her career (80 games) and averaged in double figures all four years.

Junior of the Year

Piper, who has already scored over 1,000 points in her career and is the all-time leading scorer at her high school as a junior, was one of the best players in Kansas this season. She earned all-state all-classes for the second consecutive year. She averaged over 18 points per game this season. Her dad, Chris, played on the 1988 KU National Championship team and previously served as color analyst on radio for the 2008 KU National Championship team.

Sophomore of the Year

Gegg, one of Kansas’ best scorers, averaged 23 points per game for the Grizzlies this season as they finished fourth at the 4A-I state tournament in Salina. It marked the second consecutive year Gegg has averaged at least 20 points per game and already has over 1,000 career points in high school in just two years. She was a first team All 4A-I selection last year and earned second team all-class honors from Sports in Kansas, but this year gets on both first teams.

Freshman of the Year

Brown earned first team All-6A honors this season for Derby, a rare feat for a freshman in high school. Standing 6-foot-5, she averaged 13 points, 10 rebounds and four blocks per contest this season. Derby finished 19-4 on the year and lost in the first round of the 6A state tournament to Olathe East in Wichita.