v Sports in KS: 2016 Girls Basketball Coaches of the Year - Sports in Kansas

Sports in KS: 2016 Girls Basketball Coaches of the Year

Pat Stiles of Central Plains earned All-Classes and 2A Coach of the Year Honors. (submitted photo) 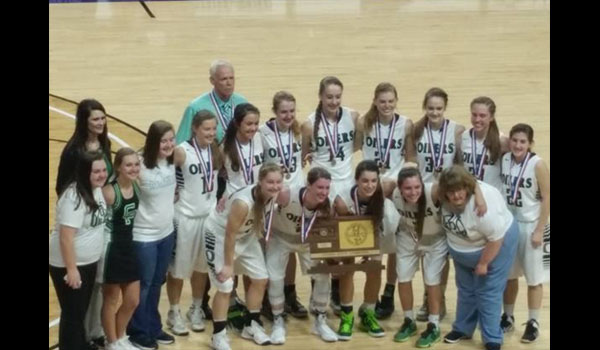 2016 Sports in Kansas Girls Basketball Coach of the Year Honors

Coach of the Year Capsules

Stiles is one of the most known basketball names in Kansas because of what Pat’s daughter, Jackie Stiles, did in high school (Claflin), college and the WNBA, but now Pat has made a name for himself in coaching. Stiles is 77-1 over the last three years with three state titles, including an undefeated run this season in 2A. The Oilers are 97-4 during his four years as the girls basketball head coach at Central Plains.

No surprise with Scales again earning coach of the year honors as the Titans won their fourth consecutive state title in 6A, the first team to ever win four straight at that level. The Titans went 25-0 this season under Scales, 96-4 over the past four title runs and he has a career record of 110-13 in five seasons, numbers that almost seem made up. Scales will have to replace multiple time all-state selections, Kendrian Elliott and Ericka Mattingly, who have been constants for the program over the last four years.

Hetzel led Aquinas to the 5A state title as they defeated Leavenworth 39-38 in the championship game in Topeka. It marked the fifth state title for Hetzel since he won his first back in 2001 at Aquinas. The Saints finished the season at 20-5 this year and played in the loaded Eastern Kansas League that featured state power and three-peat 4A-I champ Miege.

It almost seems like it’s a given on who’s going to get the coach of the year in this classification. Since this class began in 2014, no other team or coach has won a state title in the class. English captured his 19th state basketball title at Miege this season with a perfect record for the three-peat in 4A-I. It marked the fourth undefeated season in school history for Miege, all under English, which is also a state record. His 75 state tournament wins in Kansas, dating back to 1977, are also the most all-time in Kansas.

Clay Center captured its first ever girls state basketball title with a 56-50 victory over Topeka Hayden in the 4A-II state championship in Emporia. Edwards led his squad to a 21-4 finish in 2016 and made his way to the title with a first round win over Baldwin (53-48) and semi-final win over last year’s champ Hugoton (53-42). Clay Center has made the state tournament just four times in school history. Prior to this year their highest finish was third twice (1999, 2015). The 1999 squad featured former WNBA player and Kansas State All-American Nicole Ohlde.

Ziegler, who is in his second stint with the program, won his fifth state title as a head coach, but his first since his second stint back. Ziegler won his four state titles at Silver Lake ranging in the years from 1983-2002. This year’s senior led team finished the season with a perfect 26-0 record and captured the 3A state title over Sabetha with a 57-44 victory.  It marked the third time Ziegler has had an undefeated state championship team at Silver Lake, second most in Kansas history behind Bishop Miege (4).

It had been a while since a team besides Hoxie had won a state title, in fact 2010 was the year, but not the case anymore as Holthaus led the Panthers to the 1A-I state title in Dodge City with a 54-36 victory over Waverly in the state title game. Centralia also ended Hoxie’s quest for their fifth straight state title by knocking them off 45-30 in the 1A-I girls semi-final. The Panthers finished 25-1 on the season. It was Centralias first state title since 2004 and first under Holthaus.

Felker led Dighton to its first ever girls state basketball title with a 64-56 victory over Axtell in the 1A-II state championship final in Dodge City. Dighton finished the season with a 22-3 record. The Hornets were led by a trio of all-state selections in Sara Cramer, Dakota Hoffman and Jordan Speer.

To view the rest of all-state honors check on our main page at kansas-sports.com