v Kent of Pittsburg exploding on the recruiting scene - Sports in Kansas 
Warning: include(../includes/bodytag.php): failed to open stream: No such file or directory in /home/kansass/public_html/ks/news/index.php on line 36

Kent of Pittsburg exploding on the recruiting scene 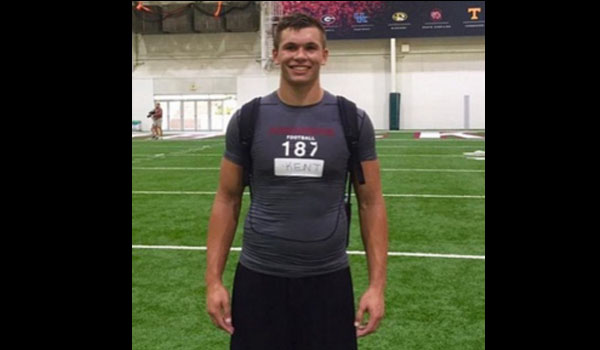 Pittsburg 2017 Junior TE/DE, Trevor Kent, has exploded onto the national recruiting scene over the past month. Kent, who stands 6-foot-5 and weighs 245 pounds, has already picked up eight total FBS offers, an early indication that it could get into the twenty offer range before its all said and done. To give you an idea, Isaiahh Loudermilk of West Elk (2016), had zero offers this time last year, and ended up with 13 FBS offers before ultimately picking Wisconsin over several other power five offers.

Kent, who was offered by Nebraska on Monday afternoon, also holds offers from Iowa State, Kansas, Kansas State, Mizzou, Michigan, Northwestern and Penn State. The Penn State offer came right before Nebraska this past weekend. As of two weeks ago the 2017 prospect had only two early offers (Northwestern, Iowa State) and it started exploding on National Signing Week 2016, which many would expect to happen as this years senior class of recruiting is being finalized. Kent could end up being the top overall prospect in Kansas for the class of 2017 as no other player from Kansas currently has more offers out of his graduation class for football. Although many think he will be a tight end, many schools are also recruiting him as a defensive end. With the offers rising he may wind up being a top 20 tight end in the country for the class of 2017.

"Growing up all I have wanted to do was to play Division I football. I always thought it may be out of reach so for all this to happen right now is mind boggling to me. It's a very exciting experience for me and my family to go through." Kent told Chet Kupen of Sports in Kansas on Monday afternoon..

Offers may be unexpected for him, but not to anybody that has been following this kids size and athletic ability since he's been playing as a freshman in high school. Something Kent does have that a lot of players don't have is combination of size, speed and strength. Weighing nearly 250 pounds, he can still run in the 4.8 range, bench presses in the 300 range and squats over 410 pounds.

Kent earned first team All Non-Senior honors from Sports in Kansas as a Tight End in 2015 as he helped the Dragons reach the Class 5A playoffs for the second consecutive year. Pittsburg High has sent many players to the division one ranks over the years, both out of high school and junior college, but Kent could end up being the most highly recruited player in school history. Some notable: In 1996 Shad Meier signed with Kansas State and went on to play in the NFL. Meier's younger brothers Dylan (2002) and Kerry (2005) also signed with Kansas State and Kansas, Kerry making it to the NFL. Last year, Alex Barnes, arguably the best back in Pittsburg history, signed with Kansas State. Kent already has more offers than all of them and hasn't played a snap in his senior season.

Expect many more offers to fall for this rising senior-to-be prospect out of Southeast Kansas.

"It will be really cool that I will have the opportunity to be a part of one of these great programs that I grew up watching on television. It's definitely a great experience that not everyone gets to do, I'm thankful for it." Kent said