v No Longer Paper Tigers, Ike off to 13-1 start - Sports in Kansas

No Longer Paper Tigers, Ike off to 13-1 start

Goddard Eisenhower is a contender in 5A. (courtesy photo) 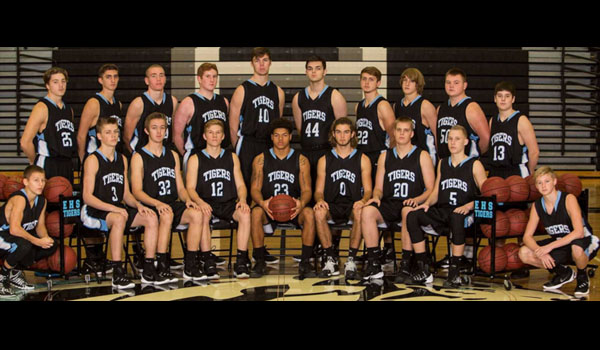 When it was announced that a new school would split off from Goddard five years ago, it set off a series of events that would begin to shape what is now the Eisenhower boys basketball program.

Steve Blue, who was carving out a successful career at Goddard, made the decision to create his own program from the ground up. That was a tantalizing option when you had players like Zach Bush and Trevon Evans ready to follow Blue to make Eisenhower a force from Day 1.

Throw in a great color scheme, new uniforms, a student section named “The Zoo,” and Eisenhower were the cool kids on the block. They won a lot of games, scored a lot of points, and threw down a lot of dunks. It was as exciting of a start as any program could have hoped for.

And all of those wins (68), points (63.2 per game), and dunks over the last four years have given Eisenhower a reputation as a highlight factory of sorts. While that is fun and exciting, a glaring omission from that reputation remains: Eisenhower still hasn’t won a game at the state tournament.

Eisenhower has had the body of work to suggest it was a title contender for three straight seasons starting with 2011-2012. That was the first year of the program, Bush’s senior year, but the Tigers were sunk by a historic performance by Bishop Carroll’s Jordan Bieberle in the opening round at state. After Bush graduated, Evans elevated his game and led Eisenhower to a 19-1 record, but that season ended with a loss in the sub-state championship to Kapaun. Next season Evans was a senior and Eisenhower raised its dominance in the regular season to new heights, cruising to the state tournament with a 21-1 record. But the Tigers were eliminated in stunning fashion in a blowout loss to Heights, once again in the first round of the state tournament.

All of that talent, all of those wins, and Eisenhower wasn’t able to capitalize on it for a run in the state tournament. On top of that, Eisenhower has had every season ended by a team from the City League. None of that sits well with anyone in the program, and especially the head man in charge.

“I think that’s a hurdle that we would love to have another opportunity at,” Blue said. “Our goal has never been to just make it to state. We want to play three games and have an opportunity at some point at Eisenhower to have a chance to play for a state title.”

If you have noticed, Eisenhower is at it again this season. The Tigers are off to another tremendous start, compiling a sterling 13-1 record with quality wins over Salina Central, Blue Valley Southwest, Maize, and Derby, and are currently sitting at No. 2 in my latest rankings for Class 5A. Another 18-plus-win season appears to be in the works, which would be Eisenhower’s fourth in five seasons (an amazing feat in itself).

But are we to believe that anything has changed? Can Eisenhower shed its reputation as Paper Tigers?

The answer is yes.

Yes, Eisenhower has done all of this before. They’ve scored as many points (even more), played as good of defense (even better), won as many games, and had just as much talent (arguably more). But what sets this year’s team apart from its predecessors is its chemistry. And that’s not to say that Eisenhower wasn’t working with chemistry before, but this year’s team creates a whole new definition of the word.

It starts with the personalities of the team’s best players. Matt Pile (averaging 19.6 points, 14.4 rebounds, and 4.3 blocks) and Dylan Vincent (15.6 points and 6.5 assists) are both mild-mannered and play team-first basketball. That kind of mentality trickles down from the top, so it’s easy to play so well together when the rest of the team knows their two best players are on the same page. Don’t be mistaken, Pile and Vincent still provide the highlights to carry on Eisenhower’s reputation, but their personalities also mesh so well with a team-first atmosphere that Blue doesn’t hesitate to call this one of the most unselfish teams he’s had.

“I do think there is kind of a different make-up to this team,” Blue said. “They get along with each other so well. In the past, it seemed like we always had some hesitation about passing here or passing there. This team, 1 through 18, gets along so well and are so unselfish that they make it fun for me to coach them and I think they’re enjoyable to watch.”

No one saw Eisenhower being this good this soon. Remember, Eisenhower suffered through its first losing season, an up-and-down 10-12 campaign, last year and lost three seniors off that team. Pile established himself as a star last season, but other than that, it was a cast of unknowns returning to Eisenhower for this season. But those cast of unknowns knew that it was going to be their time this season and when their time came they were ready.

Noah Strunk was a bit player last season, coming off the bench a few minutes per game to terrorize the other team’s best player on the perimeter. He probably wasn’t on your scouting report, averaging a modest 2.9 points. He definitely is on the report now, as he is still wreaking havoc on opposing team’s best perimeter players and he’s added some punch to his offensive game. Teams must account for Strunk now, as he is knocking down 55 percent of his 2-point shots and averaging 8.1 points, third-best on the team behind Pile and Vincent.

Jack Taliaferro and Sonny Brown, now seniors, have entered into the starting lineup and raised their consistency. They’re doing a little bit of everything - grabbing big rebounds, knocking down three-point shots, making the key assist - to help this team zoom along under their leadership. Tanner King and Austin Riggan have become reliable options off the bench, giving Blue the comfort of subbing them in when starters need a rest or are in foul trouble.

And then, of course, you have Pile and Vincent. Let’s start with Vincent, whose improvement over the off-season has, in my opinion, been a large reason why Eisenhower has surprised so many people this season. Vincent averaged 2.4 points and 1.1 assists last year and played with the deer-in-the-headlights look you would expect for most freshmen playing at the varsity level. But over the last summer, Vincent hit the weight room and worked on his game and transformed into the ideal point guard. Very few players could make a jump as big as Vincent’s: from 2.4 points and 1.1 assists to 15.6 points and 6.5 assists. He knew he was going to be handed the reigns of the offense this season and Vincent prepared himself. He was ready, but his opponents weren’t.

What more can you say about Pile? He’s a walking double-double and has registered one in all 14 games this season. It’s hard to improve on 15.7 points, 59-percent shooting, 11.1 rebounds, and 3.4 blocks (and hard enough to average that as a sophomore), but that’s exactly what Pile has done this season. He’s upped his averages to 19.6 points, 72-percent shooting, 14.4 rebounds, and 4.3 blocks. He’s still learning how best to use his 6-foot-8 frame, and yet is already the most refined post we have in South Central Kansas.

While the stats and the acclaim will belong to Pile and Vincent this season, they would be the first ones to tell you that Eisenhower is more than just a two-man team. The Tigers have elevated from being a good team to a great team not solely because it has Pile and Vincent, but because of Strunk, and Brown, and Taliaferro, and Riggan, and King. Eisenhower is playing team basketball this season, sharing the ball with all five players on offense, and then displaying the trust and will to play defense on a string. It’s what Blue envisioned for this group, just not this soon.

“I’ve been pleasantly surprised by this whole team,” Blue said. “We were coming into this season hoping a lot of these guys would be able to step up into bigger roles. So to be 12-1 at this point in the season, I’d be lying if I said this is what I was expecting. Maybe like 9-4 or something like that. 12-1 feels great, but we still have quite a lot of work to do.”

Eisenhower is on its way to another sparkling regular-season record and home-court advantage through the post-season. But it hasn’t accomplished what it wants. It still wants another league title (Andover Central, Eisenhower’s lone loss this season, will have a say in that) and it wants to return to the state tournament (a potential sub-state championship against Bishop Carroll or Maize South looms).

But most of all, Eisenhower wants to prove that it can win on the biggest stage. So can this year’s team be the one to break through the program’s painful past?

“I think this team is pretty special, just because of the way they get along and how unselfish they play and how much they root for each other,” Blue said. “So far this has been a special season and hopefully we can continue to build on that. We still have a long ways to go, but I hope this team has a lot of basketball left in it.”