v Dubbert makes 11 consecutive 3-pointers for state record - Sports in Kansas 
Warning: include(../includes/bodytag.php): failed to open stream: No such file or directory in /home/kansass/public_html/ks/news/index.php on line 36 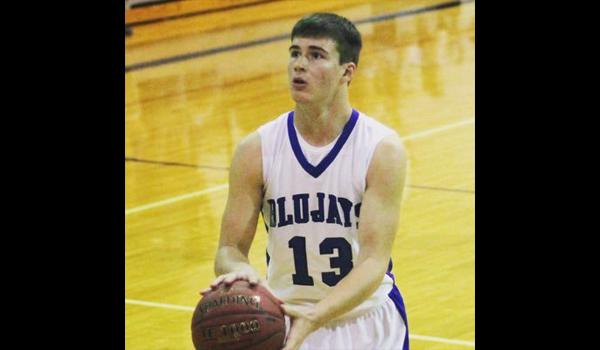 Davis Dubbert, an all-state player as a sophomore and now a junior at Beloit St. Johns/Tipton High School, made 11 consecutuve 3-pointers over three games to set the all-time Kansas record on Tuesday night against Osborne. The consecutive three point field goals record, which stood at 10 was held by Zane Davis of Garden City in 2002, was also over a period of three games. The record is not official just yet, in order to be an official record it will have to be verified by the Kansas Sports Hall of Fame.

"It's pretty cool knowing that I've accomplished something no one else in state history has down. At halftime of the game tonight I realized I had made eight in a row and knew I was close to the record from looking at them in the past. I came out in the second half and made three in a row." Dubbert said.

Here is how it all went down for Dubbert over the three game span (Osborne, Thunder Ridge, Osborne) of 11 consecutive three point field goals made, he was one of three in game one making his last three point shot, in game two he went five of five to make it to six consecutive, and finally in game three last night he went six of seven but made his first five to put the streak at 11 before it ended on his sixth shot.

St. Johns/Tipton, led by head coach Lance Bergmann, is currently ranked the number one team in the state (1A-II) by the Kansas Basketball Coaches Association (KBCA) and are off to a 10-0 start. They won 1A-II in 2014 and took second in 2015. Dubbert teamed with his older brother Trey, who graduated in 2015, to both be all-state players last season in 1A-II. This season Davis leads the way for the Blujays by averaging 23.1 points per game. Mason Eilert is averaging 7.8 points per game while Parker Gates chips in 5.6 per contest.

"We've started off well at 10-0 with some quality wins. There are some good teams in our division that will be looking to knock us off this year. We will need to continue to work hard the rest of the season to get to our goal of a state championship" Dubbert said.