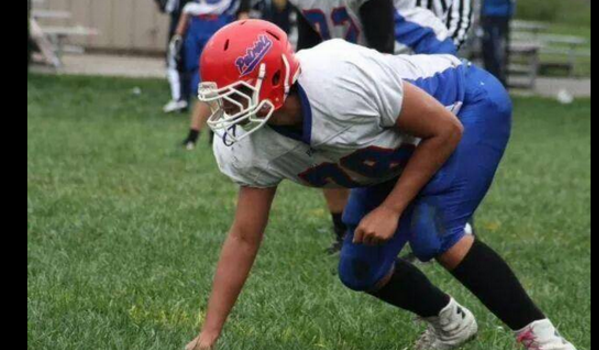 Isaiahh Loudermilk, a senior offensive lineman and defensive lineman, of West Elk High School in Howard (population 687) made it official by picking Wisconsin on Thursday afternoon. Loudermilk took the Badgers over 13 FBS offers in a final three that included Kansas State, Oregon, and Wisconsin.

"Wisconsin was a great fit. After going to all of the other visits, none of them seemed to be like Wisconsin. Oregon had been my favorite and was probably my dream school but after going to Wisconsin that changed."  Loudermilk said.

Several schools were involved in the 8-man stars recruiting process and he highly considered many of them.

"It's great to have all of the offers. I appreciate all the people that have recruited me." Loudermilk said.

Loudermilk has earned all-state honors at offensive and defensive line in each of the last two seasons for the Patriots. He also was an all 2a basketball player last winter for West Elk, where he led the state in rebounds. Loudermilk features the size coaches are drooling over at 6-foot-7 and weighing 287 pounds. He also shows the athletic ability, being a multiple sport all-state athlete. Wisconsin, who produced NFL star J.J. Watt at defensive end, projects Loudermilk on the defensive side of the ball.

The recruiting process was kind of crazy for the 8-man player, who was unknown to many this time last year, in fact he had zero division one offers this time last January. A Wyoming offer came in February and created a domino effect for Loudermilk, who ended up with nearly 15 FBS offers from a town of under 700.

"The first division one coach that came through the hallways here at West Elk last winter, he told me he may be the first but definitely wouldnt be the last, which couldn't have been more true. There's not a more deserving young man than Isaiahh. He is excited." West Elk head coach, Chris Haag said.

For now its basketball season for Loudermilk who will look to repeat as an all 2A selection this winter.