v Sports in Kansas: 2015 Football Coaches of the Year - Sports in Kansas 
Warning: include(../includes/bodytag.php): failed to open stream: No such file or directory in /home/kansass/public_html/ks/news/index.php on line 36

Sports in Kansas: 2015 Football Coaches of the Year 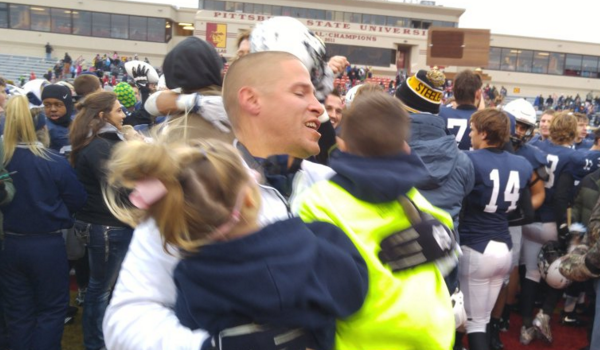 2015 Sports in Kansas Coaches of the Year

Applebee led Mill Valley (5A) to its first ever state title with a 12-1 record in 2015. The Jaguars were the only Kansas program 4A-II and above with an undefeated record against Kansas competition, as their only loss came to Staley out of Missouri. Applebee had signature wins this year over Aquinas twice, Derby, and Bishop Carroll in the state championship game. A huge improvement with a state title after they finished 5-5 in 2014.

Clark picked up his second state title at Derby in three years, winning it all in 2013 and this year with a state championship win over Blue Valley. The Panthers (12-1) only loss this season came to 5A state champion Mill Valley. Clark and Mill Valley head coach, Joel Applebee, are best friends, cousins and have worked together prior at Derby. Clark has Derby as a consistent contender and a premier program in the state of Kansas.

Marinelli took Eisenhower to its first ever sub-state berth this year after Ike went 2-7 last season. Marinelli went 7-5 over the 2015 campaign and has helped elevate a brand new program into a contender in just his third year as the head coach.

Audley who is the only coach in the history of the Jaguar program took them to their first ever state title appearance in 2015. Although not the outcome they had hoped for, Audley and the Jaguars proved to be the best team on the west side of the state for 2015. Andover Central finished 10-3 and as the 4A-I state runner up after losing to Bishop Miege in the state title game in Topeka.

Teeter in just his second year of the program at Holcomb has taking them to the semifinals and now a state title after their 21-0 win over Holton in the 4A-II state title game. Teeter led Holcomb (11-2) to their first ever state football title in 2015. Teeter and his son, Trey, who is an all-state quarterback, proved to be the perfect fit for the Longhorn program.

Hammes has Rossville (14-0) as a back-to-back champion in just three years with the program. Prior to his arrival, Rossville was always a power but never had a state title and couldn't seem to get past Silver Lake in the sub-state title game. The Dawgs have a 28 game winning streak heading into 2015 but must replace Sports in Kansas Player of the Year Tucker Horak.

Covington led Phillipsburg (11-2) to their first ever state football title by defeating Troy 30-29 in the 2-1A state title game in Hays. Covington has six playoff wins in the last two years for the Panthers, as the program only has 12 playoff wins all time. He also led them to a semifinal appearance last season.

Fowler led the Royal Lancers (13-0) to their first ever state football title in 2015. It's safe to say Fowler also knows how to win the hallways as Spearville had 39 players on its 8-man roster in a school that had an enrollment of under 100 when the divisions were classified. Spearville won their 8M-I title by defeating Hanover 62-16 finishing one of the most dominating seasons in 8-man history.

Oberle would lead Victoria to its second consecutive state title with a 36-28 win over Argonia-Attica in the 8M-II state championship game in Newton. Victoria has only lost one football game over their last two consecutive state titles and finished the 2015 campaign with a perfect 12-0 record. Brady Dinkel's game winning run in the title game will never be forgotten by anyone who follows 8-man football in Kansas.