v Six state champions crowned on Championship Saturday - Sports in Kansas 
Warning: include(../includes/bodytag.php): failed to open stream: No such file or directory in /home/kansass/public_html/ks/news/index.php on line 36

Mill Valley got its first ever state title on Saturday over Carroll, 35-14. (Photo: Ryan Atkinson) 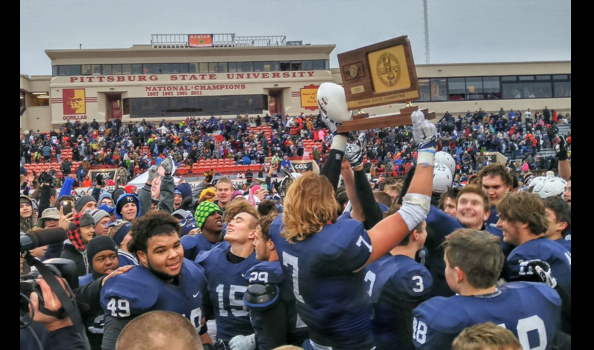 Derby would win its third all-time state title in Emporia on Saturday and second title under Brandon Clark in three years since the Panthers won it all in 2013. Brady Rust led the offensive attack with over 390 yards of offense in the contest and four total touchdowns. Rust has been doing it all season as he gained over 3,700 yards of offense at the quarterback position in 2015. Blue Valley would score first in the contest but Derby led 13-7 at the break before getting the 27-14 victory over Blue Valley, who was making their first ever state title appearance at the 6A level. Derby’s only loss this season came to the 5A state champion, Mill Valley.

Miege proved that nobody in 4A-I was able to hang with them this season and won their second straight 4A-I state championship by cruising to a 68-12 victory over Andover Central in Topeka on Saturday. Senior running back Dawson Downing, an all-state selection a year ago, rushed for over 200 yards and scored six touchdowns for the Stags. Miege, who finished 12-1 on the season with their only loss to 6A state runner-up Blue Valley, was leading 48-6 at the half. Jordan Birch was the bright spot for Andover Central, who was making their first ever title appearance, as he rushed for 132 yards and a touchdown in the contest. Miege now has six state titles as a school and three since 2009, the last two coming under Jon Holmes.

Holcomb was one of the favorites to be here at the beginning of the season and they proved it by winning their first ever state football title on Saturday in Salina over state power Holton in the 4A-II state championship. The game was scoreless after the first quarter and Holcomb led just 6-0 heading into the break, after a Dillon Williams short TD run early in the second quarter. The difference maker in the game proved to be the Trey Teeter pass to Braden Showalter, which was nearly picked off by Holton, bobbled and caught by Showalter for the score, as the Longhorns got a two point conversion to Conner VanCleave to make the score 14-0 with 9:25 remaining in the third quarter. Teeter would connect again with Showalter from 60 yards out with 3:07 remaining in the third quarter for the game’s final score. Holcomb finished the season with an 11-2 record under Kent Teeter. The Longhorns also won 4A-II state basketball last March. Holton was led by senior Mason Barta who rushed for 58 yards on the ground.

In what we thought would be the best game of the weekend, turned out to be that way. With awful weather in Hutchinson it limited the playmakers and speed of both teams, but it didn't limit Saturday's game from one of the most evenly matched contests of the year. Rossville led 7-0 in the first, before Collegiate would tie it up to remain 7-7 at the half. Collegiate would score 19 unanswered, 12 of those in the third quarter, as it led 19-7 entering the fourth quarter. Rossville All-State selection, Tucker Horak, proved to be the difference as he scored all three touchdowns for Rossville, including the two touchdowns in the fourth quarter which went unanswered, one a nine yard rushing touchdown and the other a 65 yard fumble return for a touchdown to make the score 20-19. Collegiate would have the ball on the Rossville 16 yard line with eight seconds left down by one but in their final effort the pass was intercepted, giving the Bulldawgs their second straight 3A state title. Austin Waddell led Collegiate with two passing touchdowns and a rushing touchdown, as Nathan Burgyone and Jack Larsen each had receiving touchdowns for the Spartans. Horak was limited to his usual video-game like numbers, but still had nearly 200 yards of total offense including over 150 rushing yards in the contest. Dawson Hammes also had 57 yards rushing in the game for Rossville.

We knew one team in this contest was going to get their first ever state title and the 2-1A title game turned out to be a good one in Hays as the Phillipsburg Panthers got their first ever state football title by beating Troy in the second one point game of the day on Saturday, the other being Rossville’s win over Collegiate in 3A. Troy jumped out to a 9-0 lead that included a safety and a touchdown with under four minutes left in the first quarter. Troy led 17-16 at the half, but despite putting together some drives in the third quarter in the redzone couldn’t get into the endzone. It was back and forth as Phillipsburg took their first drive on the third quarter in for a score to make it 22-17. Troy would take back the lead to make it 23-22 on a 63 yards pass from Reid Greaser to Chris Winkel. Sophomore Kirk Coomes, who had every score and two point conversion in the game for the Panthers and over 200 yards rushing, scored on fourth down to give Phillipsburg the lead 30-23. Troy would score again with under four minutes remaining on a Greaser touchdown to Cuttar Huss, but went for two and did not get it. Troy tried an onside and Phillispburg would drain out the clock, including an offsides penalty on Troy when it was 4th and 4 to seal the victory for the Panthers. Troy finished the season at 10-2, while the Panthers finished as 11-2 and the 2-1A state champions.