v Phillipsburg looking for first ever state football title - Sports in Kansas 
Warning: include(../includes/bodytag.php): failed to open stream: No such file or directory in /home/kansass/public_html/ks/news/index.php on line 36

Phillipsburg to play in its first ever title game on Saturday against Troy. (photo: Rachel Martin) 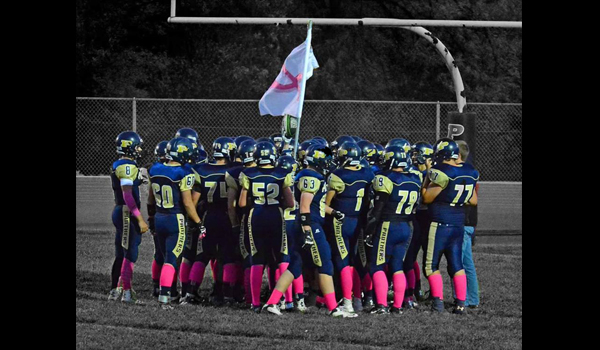 The (10-2) Phillipsburg football team will be playing for their first ever state title on Saturday afternoon when the Panthers will take on Troy at Fort Hays State’s Lewis Field Stadium.  In fact, both teams will be making their first trips to the 2-1A state title game in program history.

“It feels amazing to get to the title game,” head coach J.B. Covington said.  “It’s unbelievable to see our school, past players, and community so alive with excitement.  It’d feel satisfying to win the title because I know how much hard work has gone into the journey at a lot of different levels.”

Most teams playing in this weekend’s state title games have a starting quarterback that has had experience at the varsity level prior to this season.  That can’t be said about the Phillipsburg quarterback, Trey Sides filled the shoes of former all-stater Sam Sage.  Sides has stepped up this season and has done an exceptional job of helping lead the Panthers to Saturday’s finals.

“I give a lot of the credit to my offensive linemen,” Sides said.  “They’re the boys that make everything possible.  Over the summer they worked extremely hard and got into shape for the season.  Every senior on this team has helped me throughout the process.  It’s been a great experience and I’m glad my freshman year has been with this group of guys.”

“I play hard every play just as the rest of my teammates do as well,” Mark Coomes said.  “I just read my blocks to find the open holes to explode through. I don't necessarily like being brought down which is what has allowed me to make plays for my team.”

The offensive line for the Panthers has been a force to reckon with.  Three of the four linemen are seniors and the other is a sophomore.  Seniors, Kian Stegmaier, Donovan Lumpkin and Connor Boxler all stand at 6-foot or above and 235 pounds or greater.  Sophomore, Dakota Dunning also helps pave the way at 6-foot-4, 275 pounds.

“Our linemen are awesome,” Mark Coomes said.  “Without them, we’d be nothing.  They pave the way each and every time the ball is snapped.”

The Panthers last loss came in week six to a very good Sedgwick team, 34-32.  Since then, Phillipsburg has outscored opponents 230-53.  Most recently defeating Mid-Continental League rival Smith Center 40-6 on the field of the Redmen to claim their spot in the 2-1A state final.

Troy, on the other hand will also be making their first trip in the 2-1A state game.  The Trojans have won 10 straight games after falling in week one to Washington County, 36-18.  Troy is a team that will try to score often.  They average 43 points per game and 52 points per contest in the playoffs.  The Trojans are led by multi-threat athlete Cuttar Huss, who leads the team in both rushing (665 yards) and receiving (625 yards).