v Troy back in semis, still looking for title game berth - Sports in Kansas 
Warning: include(../includes/bodytag.php): failed to open stream: No such file or directory in /home/kansass/public_html/ks/news/index.php on line 36

Troy back in semis, still looking for title game berth

Troy is back into the state semifinals for second time in two years. (photo: Janel Anderson) 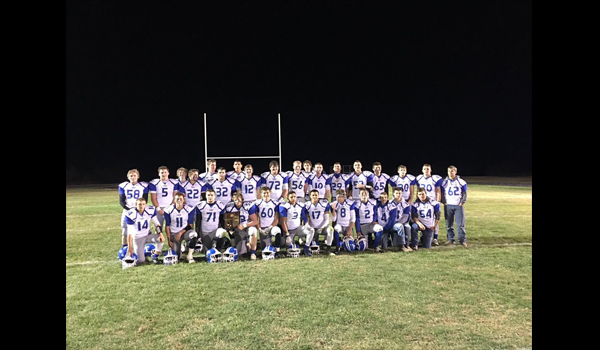 Troy is back in the 2-1A state semifinals for the second time in the history of the program in as many years. Last year may have been kind of a surprise but some expected it with key players returning. This year, not so much the case, it's a big surprise with only four starters that returned on offense and three starters on defense from the 2014 season.

“Nobody probably believed we would be here, maybe not even in our own community because of all the players we lost. I know the guys in our locker room did.” Troy head coach, Derek Jasper said.

Last year the Trojans had all-state quarterback Tristan Speer, who passed for over 2,000 yards, and earned all-state honors, but he graduated in 2015. They did return all-state receiver Cuttar Huss who has had another big year for the Trojans as a junior, but there were many unknowns in replacing all the key players from a deep semifinal run in 2-1A. One was replacing the quarterback position, but Reid Greiser has answered that as he has stepped up big with 1,481 passing and 420 rushing with 21 passing touchdowns to just three INT.

“The kid has had an outstanding year. He was my junior high quarterback before I took over the high school program, so he has been running my system for a while. He is a smart kid and is making great decisions.” Jasper said.

Troy has never made a state title game appearance in the history of its football program, losing last year to Olpe in the 2-1A state semifinals. Troy has 12 playoff wins as a school, Jasper has five of those wins in the three years he has been head coach. Troy had just two wins (seven losses) three years ago before Jasper took over, since then the Trojans are 25-7.

“Last year was a heartbreaker for us losing to Olpe. This year our senior class has been overlooked because of last years group, I challenged them in the off-season to get better and to believe that they could get back to this point.” Jasper said.

Believing is exactly what they have done in 2015 as the Trojans have won nine consecutive since dropping their season opener to 3A Washington County. The Trojans also beat Centralia this year a team every team in the Twin Valley League has struggled with for the last several years.

“The Washington County game was an eye opener for us. We had to challenge our kids after that. We could have been like, man we lost that good class from last year this year is going to be tough to win, but our kids didn’t  want that, didn't give up and we’ve won nine in a row since.” Jasper said.

The biggest challenge of the season will come this Friday against Olpe, a team that the Trojans lost to 36-28 in 2014 and won the 2-1A state title. Last year Olpe hosted the Trojans, this year the Troy gets them at home. A win would put Troy into the 2-1A state title game for the first time in school history.

“The town pretty much shuts down on Friday nights in Troy. I think that's one of the coolest things about high school football in Kansas. It’s the biggest thing going on in the community. It’s certainly the biggest game we have ever had in this town with it being the first semifinal we have ever hosted. Our community is excited.” Jasper said.

The winner of Troy/Olpe this Friday will take on the winner of Smith Center/Phillipsburg in the 2-1A state championship next weekend at Fort Hays State University in Hays. We caught up with Coach Jasper in the following interview here.

Special thanks to the Troy Booster Club for their support of Sports in Kansas over the 2015 football season. Also be sure to nominate the Northeast Kansas Athlete of the Month from Rainbow Communications by tweeting us at @sportsinkansas.