v Hanover's Bruna into the record books but not done yet - Sports in Kansas 
Warning: include(../includes/bodytag.php): failed to open stream: No such file or directory in /home/kansass/public_html/ks/news/index.php on line 36

Hanover's Bruna into the record books but not done yet

Will Bruna of Hanover is the single season record holder in 8M for passing yards. (courtesy photo) 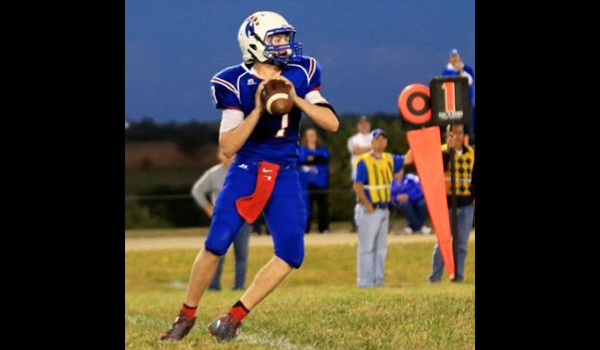 Coming into the season it was unknown how good Hanover would be or how good the play of quarterback, Will Bruna (6-1 170), would be. It was actually unclear if he would be the starter. Hanover lost all eight starters and only returned two defensive starters off their 8M-I state runner-up team.

That is no longer an issue as Bruna, a first year starter this year as a junior that replaced his older brother, Andrew, is having a record breaking year in Kansas. Bruna has done nothing but become the first 3,000 plus yard passer in the history of Kansas 8-man football for a single season. His 373 yards on Saturday against West Elk put Bruna at 3,010 yards for the 2015 season, shattering the old record of 2,837 set by Michael Hammersmith of White City in 2000.

"It's a cool accomplishment, but individual achievements mean nothing if you don't win. It isn't something I thought about going into the season but I have had my teammates step up and make plays around me." Bruna said.

Bruna isn't just done yet this season either. His 51 touchdown passes this season is just one away from tying the single season 8-man record of 52 set by Bo Savage in 2010. Hanover is led by receivers Trey Lohse, Devin Jueneman, Matthew White and Adam Zarybnicky who have combined for over 3,000 yards receiving and 51 touchdowns.

"My team made this possible. Our offensive line has given me more than enough time to make the throws. If I make a bad throw my receivers have been able to bale me out. Our coaches also have done a great job preparing us for all that we have accomplished this year. Thanks to my teammates, my job has been easy."

Hanover (11-0) will take on Burlingame (11-0) in an away game this Friday in the 8M-I semifinals as Bruna will look to get his team back to the 8M-I state title game and improve on his yardage total.

"We know Burlingame is a good team, probably our toughest challenge yet. We really have to focus in practice this week." Bruna said.