v Faces in KS: Joey Dolan - Sports in Kansas 
Warning: include(../includes/bodytag.php): failed to open stream: No such file or directory in /home/kansass/public_html/ks/news/index.php on line 36

Joey Dolan is among the states best QBs in 2015. (photo: Adam Murray Photography) 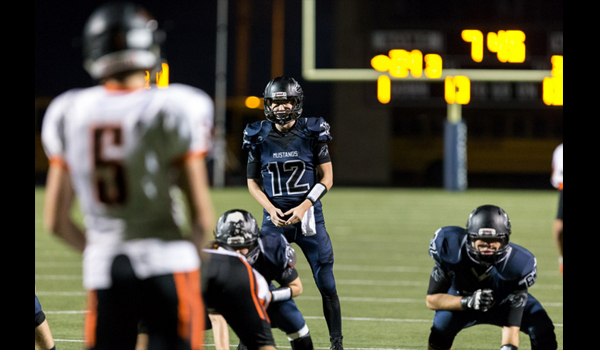 Blue Valley North football hasn't had a lot to be proud of in recent time. The Mustangs won just three football games from 2011-2014, those wins being one win in 2012 and two wins in 2014. That isn't the case in 2015 as second year head coach Andy Sims has his squad at 7-1, a spot in the 6A playoffs, and a district championship on the line tonight against Shawnee Mission West. A big reason for that has been the play of senior Quarterback Joey Dolan.

Dolan, a 6-foot-2, 170 pound senior, has completed 150 of 227 passes (66.1%) for 2,134 yards and 26 touchdowns (7 INT) through the first seven weeks of the season. He currently ranks first in touchdown passes in 11-man in all-classes of Kansas with 26 and third in all-classes of Kansas 11-man with his 2,134 passing yards. Dolan wasn’t any stranger to putting up numbers as he had over 2,000 yards passing in just nine games last season, but North has really elevated their play in 2015, including a huge win over traditional power Blue Valley in week five.

“I knew coming into this year that with my great receiving core, they were going to give me every opportunity to put up big numbers. The trust I have with my receivers and vice versa contributes to my confidence out on the field, knowing where they are going to be, and knowing that if I put the ball in a place that gives them a chance to catch it, they were going to make a play. The offensive line has stepped up in a huge way this season by giving me plenty of time to survey the field for my receivers.” Dolan said.

Great receiving core may be an understatement. North is one of the rare teams in the state with three receivers over 500 yards this season. Alex Blake leads the Mustangs with 702 yards receiving on 38 catches, 13 of those going for a score. Josh Pederson has caught 37 balls for 553 yards and seven touchdowns. Charlie Brock has caught 33 balls for 506 yards and five more scores.

Dolan and North will take their 7-1 record to the district championship tonight as they take on Shawnee Mission West (7-1). 6A football is arguably as deep as it’s ever been in Kansas with 10 teams that have only one loss or less. Regardless of tonight’s outcome, the Mustangs are in the playoffs for the first time since 2007. Blue Valley North is 2-8 all-time in the Kansas playoffs and this year will mark their ninth all-time appearance.

“6A has a lot of good teams. There are a lot of teams that have a chance this year at making a run to the title. It’s going to be a tough path.” Dolan said.

We caught up with Joey below.

I grew up in a family of with one girl and that is my mother. I have three older brothers and no sisters so we were always playing sports in the backyard or on the driveway. Whether it was wiffle ball or 3 on 3 tackle football with the neighbors, it was nonstop action around the Dolan household. Playing sports was inevitable because of my upbringing.

Is this season a big surprise for how well your team has played?

To most people not around our program, the wins we’ve been rolling in this season is a surprise for sure. To the players on this team and the people in our community, we knew we had the potential to do something special this season. We put in work all throughout the offseason from the week after our final loss to Shawnee Mission West last season. We’ve been preaching the word “Legacy” ever since our freshman year and we wanted to leave a Legacy for the younger players on our team to run with. The wins have definitely been a nice reward for all of work we have put in with each other.

Did you expect to put up the numbers you have so far this season?

I knew coming into this year that with my great receiving core, they were going to give me every opportunity to put up big numbers. The trust I have with my receivers and vice versa contributes to my confidence out on the field, knowing where they are going to be, and knowing that if I put the ball in a place that gives them a chance to catch it, they were going to make a play. The offensive line has stepped up in a huge way this season by giving me plenty of time to survey the field for my receivers. Not having to worry about anybody slipping through the O-Line is a huge advantage for me this year. Also, our running game has been clicking which helps keep the linebackers honest and denies teams from dropping eight back into coverage to stop our passing game.

How valuable is it to have three big time weapons to throw to and how are all three different from each other?

I am truly blessed to have the receiving core I do this season. Alex Blake has been my go to receiver since freshman year. He is a big body coming in at 6’3-6’4 and weighing 210, but also running a 4.6 40. I gave him the nickname Megatron this year because of some of the catches he has made and how hard it is to bring him down after the catch. Josh Pederson is another big target, coming in at 6’5 200 pounds, he gives me the comfort of having a guy that can dominate the middle of the field and beat a guy deep if needed. Lastly, Charlie Brock has been a pleasant surprise for me this year. I’ve been playing with him since 2nd grade and the trust we have with each other shows out on the field. He is a dynamic player that has made some incredible plays after the catch as well. Most of all, my chemistry off the field with these receivers is what makes them so special. They want to make plays for me and I want to make plays for them.

What is it like to play for Coach Sims?

Coach Sims has brought an attitude to this team that we are not going to be a doormat to opposing teams this year. Ever since he has been here, he has been preaching to us that doing the little things right will add up to accomplishing big things, and we did that this year winning a share of the EKL title. His passion and enthusiasm for the game is what our team feeds off of, and he’s a guy you want to play hard for. He brought a new outlook on our football program and the players and the community have all bought in to his philosophies.

How cool is it to see the results of this turnaround?

It is definitely very cool to see how everybody has reacted to our success this season. The community overall has changed, and more and more have been coming out to our games because I believe we are a fun team to cheer for. I don’t think any of the guys think much of it right now because we still have games to win, but later on after we graduate, I believe we will all look back on this season and realize how special what we accomplished truly was.

Best moment of the season so far?

Beating Blue Valley for a shot at the EKL title was the most memorable moment so far this season. Not only because we haven’t beat those guys in longer than a decade, but the fashion in which we won the game, going through adversity and pulling out a win in the final minutes makes it unforgettable.

How tough is the EKL?

The EKL has always been known for being one of the toughest leagues in the state. This year is no different, every team each week has a chance to win. There is no team that you look at and think that it will be a cakewalk to victory. Preparation has been a key to each of our wins so far this season.

Obviously we would love to win a State Title, that’s the goal for a lot of teams around the area, but we genuinely believe that there is not a team we can’t beat in the state. Winning the EKL title was a goal and we achieved that. Every game from here on out will be a challenge and it is going to be fun to see how everything plays out.

How tough will the 6A playoffs be?

There is so many good teams in 6A this year. That gives any team a chance at the title and like I said before, every game is going to be a challenge so wins will be very precious from here on out.

What did you do in the off-season to become a better athlete?

I put in a lot of work in the weight room and the training program Coach Sims planned out for us this past summer helped me become bigger, faster, and stronger.

I started as Small Forward for the varsity basketball team last season, and our run to state got cut short in the district championship to Olathe North. Alex Blake also plays basketball with me and we are looking to have a successful season this year.

What is it like to go to school at BV North?

Blue Valley North gives me the opportunity to excel in the classroom and out on the field. The support we have from the staff and others around the school is incredible.

Seeing any recruiting interest and plans at the next level?

There is some small local schools that have showed interest in me playing for them next year, but I have still not decided whether or not I want to continue to play at the collegiate level.

I am a huge dog lover.