Riley England of Osawatomie leads the state of Kansas in rushing. (submitted photo) 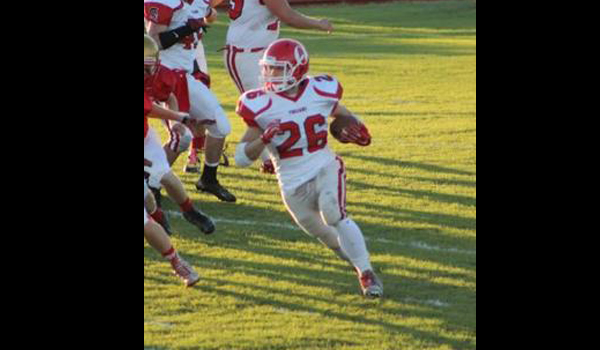 Riley England of Osawatomie High School is the state’s leading rusher this season.  England has racked up 2,027 yards in eight games played so far.  That’s averaging nearly 253.4 yards per game, while scoring a total of 25 total touchdowns, 24 of those coming on the ground.

Playing for the Trojans has been something that England has always loved doing.  England loves putting on the pads and helmets on Friday night’s especially, as he goes into each and every game with the same mindset.  That mindset is to win the game, no matter his stats, but just to win a game in front of the Osawatomie crowd.

England has the size, ability, academic success and overall character to play football at the next level, as of now England has no offers, but don’t be surprised if he picks up some here soon.  England stands at 6-foot-1 and weighs 200 pounds and has a 4.65 40-yard dash time.

England has been inspired to be the person he is thanks to his parents, coaches and the whole community of Osawatomie.  He says that they all set the standard and he just tries to follow what they have set.

Riley England’s favorite memory while playing for the Trojans was last season when the Trojans played Prairie View in a game which went into double-overtime.  The Trojans went on to beat their rivals by seven in a very intense game throughout the evening.  England had 42 carries for 267 yards while running into the endzone four times to lead the Trojans to the 35-28 win.

England’s football career did not start until he was 11 years old when he began to play organized football in the community.  England says that he has always loved to play football and has always been competitive with his friends, playing against each other at young ages.

When you think about a quality rusher you think of their speed, but also their vision.  England says his best feature about his game would have to be his vision, he’s able to see the open holes his linemen make for him and quickly is able to run through those.  He also has quick feet, which are vital for a premier running back.

In the fall, you can find England on the football field every day after school and on Friday night’s under the bright lights.  During the winter sports season, you can find England on the basketball court, pulling in rebounds and using his size as an advantage for the Trojans.  England doesn’t take a sports season off at all throughout the year.  During the spring season, England is a member of the Track & Field team at Osawatomie.  No matter the sport, England is tearing up the competition in the Pioneer League.

Currently, the Osawatomie Trojans football team has a record of 8-1, and has started 4A-II District 2 with a win over Prairie View 48-20 and 48-7 win over Bishop Ward.  The Trojans will travel for their final game of the year at Santa Fe Trail this Friday.  The Trojans will look to make the playoffs for the second time in England’s career for Osawatomie.  England says that his team will need to play their game and adapt to how their opponents are playing.

Special Thanks to Sonic Drive-In at 319 E. Main Street in Osawatomie for presenting this feature. Proud to support Osawatomie Athletics.

Q & A with Riley England

Q: What does it mean to you to be a football player at Osawatomie?

A: I take a lot of pride in playing at Osawatomie, we have two state championships and a community that is extremely supportive.

Q: What're your plans for next year?

A: I would really like to play college ball, I am undecided so far as to where but I want to major in business administration.

Q: At what age did you start playing football?

A: I did not start playing organized football until I was 11. But I have always been pretty competitive and played with friends.

Q: Who inspires you to be the person you are today?

A: My parents along with coaches and community leaders inspire me, they set the standard in which I try to follow.

Q: What game do you remember the most in your high school career?

A: I would have to say my most memorable game was against Prairie View my junior year, it's a rivalry game and it went into double OT.

Q: What will it take for your team to make it far in the playoffs this season?

A: We have to get the little things right and adapt to other teams way of playing.

Q: How does it feel to be the state's leading rusher?

A: It's pretty humbling to be the state's leading rusher, I think it really is a team achievement though, we run a good offense in which when executed correctly we get good results.

Q: Does #26 have a specific meaning to you or is that just the number you were stuck with?

A: #26 is a number I picked because I wanted a number that not everyone else wanted but truthfully I have no reason.

Q: Talk about your offensive line and what all they do to make your job easier?

A: My offensive line isn't very big, but they work really hard and open up huge holes that a lot of backs would appreciate. Sometimes I feel like it doesn't take much skill to run with them in front of me.

Q: What do you like best about your game?

A: My favorite thing about my game would have to be my vision.

Q: You almost have 6,000 total rushing yards in your career, how does that feel?

A: It feels pretty good to have reached some goals in yardage but all in all they don't mean much if we aren't winning.

Q: What other activities are you involved in?

A:  I do basketball and track also, but between sports and school I don't have time for much else.

Q: Have you mainly just played in one half or have you played four quarters in all of the games this season?

A:  I play some fourth quarters if the game is within 3 or so touchdowns, but there have been a few I have set out at half.