v Faces in KS: Harry Trotter - Sports in Kansas 
Warning: include(../includes/bodytag.php): failed to open stream: No such file or directory in /home/kansass/public_html/ks/news/index.php on line 36

Harry Trotter is having a breakout year for Maur Hill. (photo: Linus Wood) 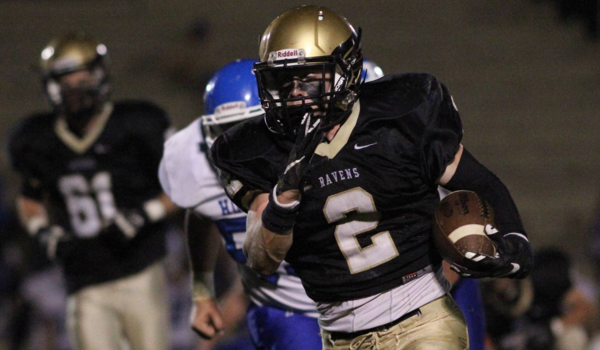 “I’ve heard it all from Harry Potter, Potter Trotter, The Wizard, Harebear and that I’m going to cast spells on people. I’m pretty used to it by now.” Trotter said.

People may joke on his name, but there is no joke about Trotter’s play this season. In six games, because MHMA had a bye in week one, Trotter has put up 1,179 rushing yards and 13 TD in his first six games of his senior season. Trotter has 1,268 total all-purpose yards and has also been a big force on defense with 64 tackes including three forced fumbles. He has helped the Ravens to a 5-1 overall record in 2015.

“We have had a good season so far. We took a close loss back in week three but we are really starting to gel and come together at the right time I feel.” Trotter said.

Last week in a 62-20 win over Atchison County, Trotter really figured it out as he rushed for a career-high 430 yards and four touchdowns, numbers that almost seem made up for a single game. His play has really helped elevate the Maur Hill program, a program that experienced its first winning season last year since 2004.

Trotter credits the hard work of his teammates in the off-season to put Maur Hill football back on the map. He also credits his off-season workouts for his big performances this year. Trotter is a weight room warrior, benching 335 pounds and squatting 435. He also features a 40-yard dash time in the 4.6 range.

“I put in as much work in the off-season as I could so I could contribute as much as I could to this team. I worked with Joshua Downing at Rise Up Fitness, he was a former player at Georgetown and opened up his own gym here in Atchison. I give him all the credit for helping me get where I am today.” Trotter said.

Maur Hill and Trotter, who is nearing 2,500 career rushing yards, will continue play this Friday as they take on Pleasant Ridge in week eight of 3A district play. Pleasant Ridge is 6-1 on the season. We caught up with the senior all-state candidate below.

How did you get involved with playing sports?

I've always had a love for sports and grew up playing a lot of them with my dad coaching me. I started to play football, baseball, and basketball in the fourth grade.

How has the season went so far?

We have had a good season so far. We are 6 and 1 right now and took a close, tough loss back in week 3. The team is really starting to gel and come together at the right time. We have had a lot of young players step up, and the team chemistry is great right now. My teammates have worked extremely hard this season and continuously improve every week.

How did you feel after the 400 plus rushing yards last week?

It was a great feeling. My coaches came up with a great game plan and we were able to execute at a high level. The offensive line worked hard all night, and created lots of holes to run through. My coaches and teammates deserve all of the credit for that game. I'm just glad that I was able to help the team win. The offensive line has been great all year. I started to receive some updates on how many yards I had towards the end of the game, but we still had a lot of work to do. God blessed me with great teammates and great coaches.

It's a great school to go to. Maur Hill-Mount Academy is a co-ed, Catholic, College Preparatory Boarding school. Both day students and boarding students attend the school. It is a cool experience because you get to meet people from all across the world. The school has a strong center of faith and academics. There are lots of great teachers and administrators at the school and all of the nationalities come together to form one community. We have students from 17 different countries at Maur Hill this year.

Who are some other players to look out for on your team?

Nick Caudle is an amazing athlete with great speed and athleticism, who we unfortunately lost for the season with a knee injury. Watch out for his name next year. Our quarterback David Olberding has stepped up this year and has played great. Matthew Schrick has filled in for Nick and has done a great job the past few weeks. Our offensive line as a whole is a weapon. They all have a great work ethic, and are very intelligent. Canyon Miller and Wyatt Funk have stepped up to fill big shoes this year. We have had a lot of underclassmen step up this year as well. Cole Harris, a 230 pound sophomore, has been great on the line all year for us also. Kevin Lykins has been another huge asset to our team. We have a lot of great weapons on the team.

What did you do to train in the off-season?

This off-season I trained with Joshua Downing at Rise Up Fitness. He was a former All-American at Georgetown and recently opened up his own gym here in Atchison. We worked all off-season on speed and strength training. He helped me put on some weight for my senior season, as well as increase my speed in the open field. We worked a lot on field vision and agility. I give him all the credit for helping me get to where I am today. He is a great trainer with lots of knowledge on the human body.

What will it take for you to make a run in 3A?

It will take full effort from every player on the team. We have the ability and talent to make a run. We just need to focus in every week, and take it one game at a time. There are lots of great athletes, and great teams in 3A this year. We have to be confident, and trust in each other.

How important is training and the weight room to you?

I would love to play football at the next level. I have taken unofficial visits to KU, Missouri Western, and Northwest Missouri State so far. I plan on visiting Wayne State, and the University of South Dakota in the following weekends. I received my first offer from Benedictine College a few days ago.

What is it like to play for Coach Monroe?

It's a blessing to play for Coach Monroe. He truly dedicates all he has to the football program. He recently had his third child, and has still been at almost every practice. He sacrifices his time at home with his family, to come and help us get better. He's a guy that you can talk to about anything at any time. He gives great football advice, but also advice on how to succeed in life beyond football. He has turned the program around at Maur Hill and deserves a lot of credit. He is a great role model that I look up to.

Living in Atchison has its pros and cons. It is a pretty small town so you basically know everyone else. Not much goes on in Atchison but I do like growing up here.

Anytime I meet a new person, they have to joke about my name. I've gotten used to it by now but I have heard it all. Some of them include Harry Potter, Potter Trotter, The Wizard, and Harebear. I always get told to cast spells on people. It's pretty funny watching people come up with nicknames for me, but I enjoy it.

Yes I play baseball, and also run track. I played basketball my freshman and sophomore year.

My favorite subject is History.