v Putz up the stats: Miege sophomore leads KS in passing - Sports in Kansas 
Warning: include(../includes/bodytag.php): failed to open stream: No such file or directory in /home/kansass/public_html/ks/news/index.php on line 36

Putz up the stats: Miege sophomore leads KS in passing 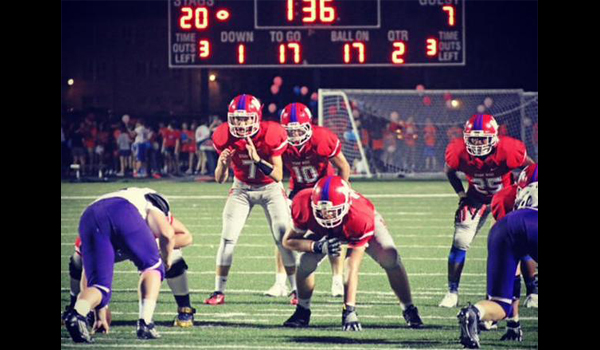 It's not a very common thing for a sophomore in high school to start at the quarterback position, let alone lead the state of Kansas in passing. That is until you meet Carter Putz, sophomore quarterback of 4A-I #1 Bishop Miege (5-1).

Putz, who entered the season in a battle for the starting job, was a huge unknown coming into the season. He had to replace two-time all-state selection in Ryan Willis, now the starting quarterback at Kansas as a true freshmen.

“Carter has been a difference maker for us. We knew we had a good set of skill players returning. The QB in our offense is a huge part based on reads they make every play. Carter has made the plays we thought he could make. His ability to keep plays alive and fine the open receivers is the biggest thing he has done for us.” Bishop Miege Head Coach Jon Holmes said.

If there were any questions on how the new quarterback at Miege would be, they may have been answered at least after the first six weeks of the season. Putz leads the state of Kansas in passing with 1,781 yards (17 TD/2 INT). In fact, Putz is on pace for 3,859 passing yards this season which would shatter the all-time state record of 3,345 set by Kyle Kruger of Silver Lake in 2002.

“It’s been great so far this season. Next to all of the preparation from Coach Hoover and the staff, having the weapons we have here at Miege has given me the confidence to go out on Fridays and just play.” Putz said.

“Carter’s play has allowed our offense to be very dynamic and multifaceted.” Downing said.

It also helps that Bishop Miege is “Quarterback High School” in the state of Kansas. Offensive Coordinator/Quarterback coach Justin Hoover is an Elite 11 Camp Instructor and is one of the most respected coaches at the position there is. Before Putz, the last three starting quarterbacks at Miege signed to play division one football including Max Shortell (Minnesota/Jacksonville State), Montell Cozart (Kansas) and Ryan Willis (Kansas).

“Miege is a special place. One of the coolest moments I’ve ever had is when Montell Cozart and Ryan Willis both texted me before my first start and told me to trust the game plan and everything would work out.” Putz said.

Everything has worked out so far for the standout sophomore. However, he may end the streak of divison one signee starting quarterbacks at Miege, but it doesn’t mean that he isn’t going division one. Putz, one of the top sophomore baseball players in the state of Kansas, has committed to play baseball at Notre Dame. Right now its football season and Putz wants to help his team get back to the title game. That starts with district play opening Friday against Spring Hill. Miege's lone loss this season came to 6A Blue Valley in Eastern Kansas League play.

“So far this season has went good. We are all looking forward to a deep run in state.” Putz said.

Special thanks to Westwood Chiropractic for powering all Bishop Miege coverage with Sports in Kansas this football season.