v Surprise Football Teams in Kansas after five weeks - Sports in Kansas 
Warning: include(../includes/bodytag.php): failed to open stream: No such file or directory in /home/kansass/public_html/ks/news/index.php on line 36

Mill Valley has opened the eyes of everyone in 2015. (photo: Karissa Schmidt) 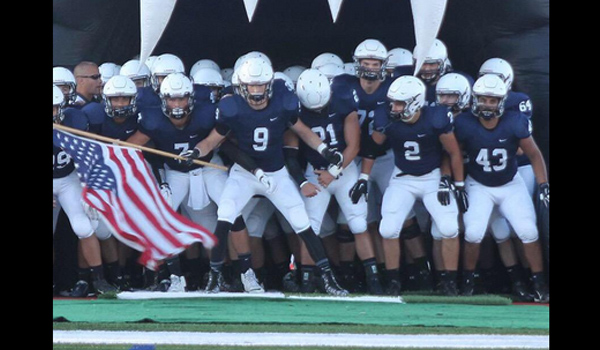 Some of the more surprising teams in the state of Kansas after the first five weeks of the football season based on the schedule that they played and what they have done different than some may have expected from the beginning of the season.

From 2011-2014, Blue Valley North had just three total wins. They have four in 2015 after five weeks of the season under second year head coach Andy Sims. Joey Dolan has played great at the Quarterback position and has three receivers, Alex Blake, Josh Pederson, and Charlie Brock with over 300 yards this season. What really showed the Mustangs were for real is their 28-27 victory over Blue Valley last Friday.

It is still unknown how good Garden City is based on their schedule but they seem to be getting the job done in 2015. Quarterback Jesse Nunez and running back Jared Koster form one of the better backfield combinations in Western Kansas and have propelled the Buffaloes to a 5-0 start. Have they been as tested as most 6A programs? No, but they did knock off a Sunflower League opponent in Olathe East (3-2) in week one, but it’s not to discredit the impressive start in 2015. We will really figure out the Buffaloes in district play (Hutch, Wichita NW, Dodge City).

The Junior Blues won just two games last year. Steve Buhler has his squad with a 4-1 record after the first five weeks of the season. They suffered their first loss of the year this past week against a very good squad in Junction City. Rural will look to get to 5-1 as they take on Highland Park this week before they get in their brutal district with Free State, Topeka High, and Manhattan, forming one of the best 6A districts in Kansas.

Not a surprise that they are good but maybe an eye opener that they are 5-0 after their schedule in 2015, that included victories over Bishop Carroll and Kapaun in week one and two. Northwest has scored at least 31 points in every game this season and is led by dual threat quarterback Kevin Folsom. Folsom has passed for over 1,000 yards in his first five games and is also a big threat with his legs. District play will get tough as they have Dodge City (3-2), Garden City (5-0), and Hutchinson (4-1) with two playoff spots on the line.

Yes, this team is the real deal. Did we know they would be this good after going 5-5 last season? We knew they would be pretty good with Logan Koch, Christian Jegen, and Ben Hecht back, but we didn’t think they would be the number one team in 5A at this point. Coach Applebee’s approach to playing better competition last year really helped his team out in 2015. Every week has been like a playoff game for the Jaguars and their only loss came last week to 5A Missouri power, Staley (28-21). Mill Valley’s resume includes a week one win over Aquinas (38-20) and a week three win over 6A Derby (27-20). If they can stay healthy this team is a definite contender to win it all in 5A.

The Thunder are still a team that is being questioned on how good they are based on their schedule. They have beat three teams from Missouri and Kansas teams, Kansas City Wyandotte, and De Soto. They will take on a struggling Coffeyville (0-5) squad in week six but we will really figure out how good they are in week seven when they take on the number one team in 5A in Mill Valley (4-1). A good record isn’t surprising but maybe the fact that they are ranked at this point has a lot of people wondering how good the Thunder are in 5A.

The Orioles, under second year head coach Jason Filbeck, showed bright flashes in 2014 and finished 5-5. This season they have elevated their play and could very well be a team sitting at 8-1 at the end of districts looking to make some noise in the 4A-I playoffs. The only loss this season came to Buhler, the number two team in the Kpreps poll, in week two of the season, 47-21.

A year after going 2-7 under then first year head coach Jake Lott, the Panthers are off to an impressive 4-1 start in one of the most wide open classifications in Kansas. They haven’t been as tested as top dogs Columbus, Andale, or Holcomb, but the Panthers do have an impressive victory over last year’s semifinalist, Santa Fe Trail in week three (40-14). They will have a tough district to get through which features Perry-Lecompton, Jefferson West and Holton. Regardless if they make the playoffs or not, Royal Valley went from an unknown to the rankings in five weeks.

Not a surprise they have a good record but maybe a surprise with the 5-0 start for the Chargers under head coach Harry Hester in 2015, including a big 20-14 win over their rival Neodesha on Friday. The offensive output has nearly doubled in yardage for the Chargers in 2015 and could be that they return a three year starter in quarterback in senior Lane Raida. Expect the Chargers, who missed the playoffs in 2014, to contend for the district title in 2015.

Garden Plain has been of the more successful programs in Kansas, but had back-to-back losing seasons at 4-5 in 2013 and 2014. This year they can be guaranteed they won’t have a losing record with a 5-0 start. The real test for the Owls and first year head coach, Ken Dusenbury, will come in week eight as they take on Halstead, a surprise team from 2014 that is currently 5-0.

Nobody seems to be talking about the Tigers in 3A this season. With a 5-0 start they have already won the Twin Valley League for the first time in school history. They also beat Centralia for the first time in nine years. The most impressive thing has been the play of the defense, only allowing 43 points all season. A 6-3 season wasn’t bad last year, but it looks like the Tigers could very well get to a 9-0 start in 2015.

With the graduation of all-state quarterback, Tristan Speer, everyone expected Troy to have a big drop off in 2015. Hasn’t been the case so far. They beat Centralia this season, something they were unable to do last year. The Trojans, under head coach Derek Jasper, became the first Twin Valley League School to beat the Panthers in 28 games. Last year’s squad finished 9-2 and made it to the 2-1A state semifinals, with 2-1A wide open don’t be surprised to see another deep Trojan run in 2015.

The defending 8-man Division I state runner-up isn’t so much a surprise at 5-0, it’s just a surprise on how well they’ve played so far in 2015 after returning zero offensive starters. Hanover has scored at least 48 points in every single game this season, including an impressive week one victory over then ranked Axtell (48-22). Will Bruna is near the top passing leaders in the state with over 1,239 yards. It seems to be Hanover just had some really good players waiting for their chance to shine. Definitely a case of reloading and not rebuilding. They are a definite contender to get back to the title game in 2015.

Uniontown, under head coach Chad Stroud, won six games last year and reached the playoffs but lost to two opponents last year that they have already beat this year in Chetopa and Madison. They have a rivalry match-up with Marmaton Valley this week and the Eagles could be a team to be on the lookout for in 8M-II.

Solomon went 4-5 a year ago and many expected them to be pretty good with the addition of all-state transfer Jake Tiernan, whose dad, Steve, took the Solomon job this past off season. What we didn’t know is how big of an impact this quarterback would have to this program. Solomon has scored at least 42 points in every contest this season and the closest margin of victory has been 26 points in last week’s win over Ellinwood.

Hartford started last season 1-4 at this point and won just four ballgames. They have already won four games this season and have won four consecutive games. The Jaguars look to have a pretty good opportunity at starting 8-1 in 2015 with the way their schedule shapes up.