v Rainbow Communications Athlete of the Month:Cooper Leach - Sports in Kansas 
Warning: include(../includes/bodytag.php): failed to open stream: No such file or directory in /home/kansass/public_html/ks/news/index.php on line 36

Cooper Leach of Doniphan West is the Rainbow Communications Athlete of the Month. 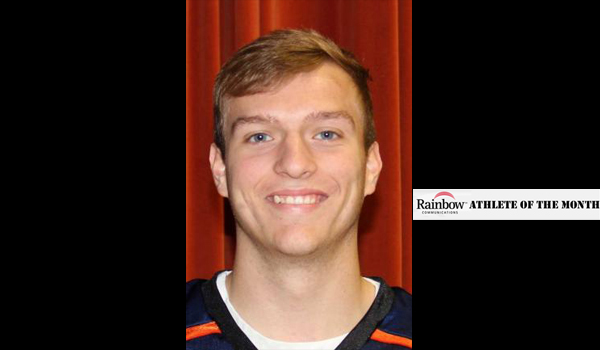 The Rainbow Communications Athlete of the Month for September from the Northeast Kansas area is Doniphan West senior wide receiver Cooper Leach.

Leach, a 6-foot-4 185 pound senior, is having a breakout season for the Mustangs. He had 450 yards recieving and nine touchdowns over the month of September in four football games. Quarterback Levi Watts passed for over 700 yards in September and the two form one of the better connections in 2-1A this season. The Mustangs who got a win on Friday (October 2nd) over Marantaha are now 3-2 this season. Leach, who tied a 11-man state record with 5 touchdowns over Valley Heights earlier this season, broke the state record on Friday with six touchdown catches in the game against Maranatha Academy.

Leach is establishing himself as one of the top multi-sport athletes in the state of Kansas.

"I am not the biggest guy on the field but I have been using my height and jumping ability as an advantage. Playing multiple sports helps me improve in all sports." Leach said.

Not only is Leach having an all-state year in football, he was named the most oustanding player of the 1A-I state basketball tournament as he helped his team to a runner-up finish.

Doniphan West hasn't experienced a lot of football success until recently. They had six combined wins in three years coming into this season and now have three already this season. Leach and Doniphan West will be back in action this Friday against Riverside (1-4).

Rainbow Communications and Sports in Kansas will be in partnership to release an athlete of the month from the Northeast Kansas Area at the beginning of the following participation month. To nominate (last 5 days of the month) send email to admin@kansas-sports.com.