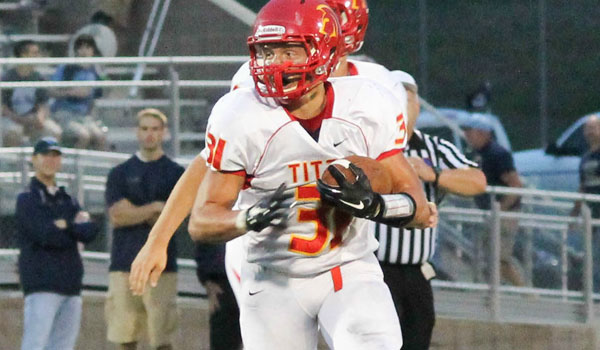 The Labette Bank Athlete of the Month chosen by Sports in Kansas for the month of September is Columbus High School senior running back and linebacker, Jace McDown.

McDown, an all-state selection last season as he helped the Titans to a second place finish in 4A-II, has been one of the most impressive players in Kansas this season after five weeks of the season. McDown has exploded for 1,088 yards and 17 touchdowns for Columbus (5-0, 4-0 CNC). He is averaging 14.7 yards per carry.

Not only is McDown been one of the states best on offense, he is also an elite defender. In limited time due to blowouts, he has racked up 33 tackles from his linebacker position.

"We have played pretty well this season. Very unselfishly. Everyone has the ability to step up. The offensive line is key for us that's where everything starts." McDown said.

Columbus, the number one ranked team in the state in 4A-II, will take on St. Mary's Colgan (4-1, 3-1 CNC) this Thursday night in Pittsburg with first place in the CNC on the line.