Dalton Peters of Salina Central is having a breakout year in 2015. (submitted photo) 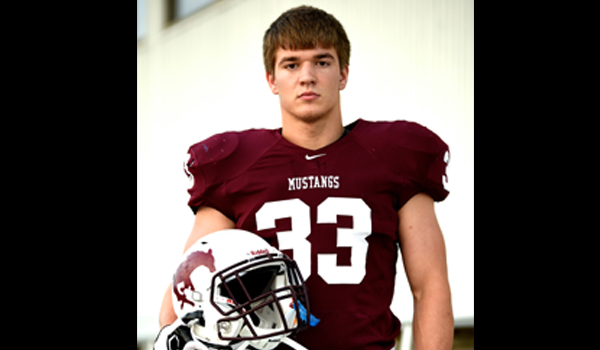 When it comes to being pound-for-pound the strongest kid across Kansas high schools, you may have to look no further than Salina Central senior Dalton Peters. Peters, a 5-foot-9 180 pound all-state football player and wrestler, is a weight room warrior and has been working out since elementary. His father, Salina Central head wrestling coach Shannon Peters, introduced him to pull-ups and push-ups in elementary. The working out hasn't stopped since as Peters cleans 300, benches 315 and squats 450.

"My dad was a collegiate wrestler, he had me doing workouts in elementary school. I did push-ups and pull-ups every single night growing up. I have spent a lot of hours working at it." Peters said.

The hours have obviously paid off. Peters, not the biggest or fastest guy on the field, has rushed for over 700 yards this season for the Mustangs in three games which unofficially ranks second in the state of Kansas. Last season as a junior he took second in the state in wrestling at 5A 170 pounds. He has established himself as one of the best multi-sport athletes in Kansas.

"Playing multiple sports keeps me well-rounded. It keeps me in great physical shape and gives me a lot of opportunities. It also keeps me focused and goal oriented." Peters said.

Peters isn't some small utility back like you would think with his size. He gets it done with speed and power. He carried the ball 41 times last week and is the workhorse of his team.

Peters also wears #33. A very special number at Salina Central as all-state running backs Tanner Hancock (1996), Tate Hancock (1999) and Jake Sharp (2005) all wore the number and would all rush for over 2,000 yards. It must be something about the 33. Peters is on track to go for over 2,100 in just the regular season this year.

Peters plans on wrestling at the next level but is still open to considering football. He also has a goal to become a state champion this year in wrestling, something he was just short of last year. Wrestling and football are also a lot different for Peters.

"Wrestling is individual and mental toughness is key. In football you have your team to rely on. You are all in it together." Peters said.

Whether he is on the wrestling mat or on the field on Friday night, the senior definitely stands out. For now its football and he will look to continue his success as his Mustangs (1-2) take on Goddard-Eisenhower this Friday on Cox Channel Kansas.

We caught up with Dalton below...

Sports have been a way of life since I was born. My dad made me do push-ups and pull-ups every night in elementary school. My dad was a collegiate wrestler and is my coach. My sister was an elite high school athlete and my little brother is our kicker as a freshman. Sports are a part of my family tree.

We are 1-2. We have had 2 tough losses against 2 great teams. Getting a victory last week was huge and we hope to build on that this week. Personally, I'm running the ball as hard as I can. The line blocks well and I just focus on doing my job.

How important is it to keep growing as a team after a 1-2 start with all that matters is district play and playoffs?

Every week our goal is to improve. The more confidence we have going into districts, the better we will be.

How tough will your district be this season?

Our district is tough every year, but we expect to make a deep run into the playoffs.

What kind of mental toughness does it take to be a wrestler?

It takes a special mindset. You have to get used to feeling comfortable while being uncomfortable. Their is no other mindset harder to achieve than the one you need in wrestling.

What is the biggest difference between training for wrestling and football?

Wrestling is individual. Mental toughness is key.  And, you have to get in the best physical shape possible. Those 6 minutes on the mat require all that your body can take.  In football you have your team to rely on. You are all in it together. In wrestling you don't have that aspect.

Goals this year for wrestling?

Be a state champion

How does playing multiple sports help you out?

It makes you well-rounded. It keeps you in great physical shape. It gives me a lot of opportunities. It keeps me focused and goal-oriented.

Are you a weight room fanatic?

Yes, I am in the 1000lb club and work out quite often. I spend a lot of hours working at it.

What is it like to wrestle for your dad?

It's nice to have a coach I can relate to and a person who knows and understands me better than anyone else. My dad is a great role model who has relentless drive and dedication to the sport of wrestling.

Plans at the next level and what interest are you seeing?

I plan to wrestle in college at the DI or DII level. I'm currently making visits to narrow down my options. My options are open for football too, I've gotten some looks for that too.

Chemistry (not really, but my dad teaches chemistry and is paying me to say this)

What is it like to go to school at SC?

It is awesome to be a part of a big school with all types of students and opportunities. We have awesome student sections and great teachers.

I'm not as mad as I look... People deceive me to looking like I'm angry all the time. I'm just focused and determined.