v Faces in KS: Cooper Leach - Sports in Kansas 
Warning: include(../includes/bodytag.php): failed to open stream: No such file or directory in /home/kansass/public_html/ks/news/index.php on line 36 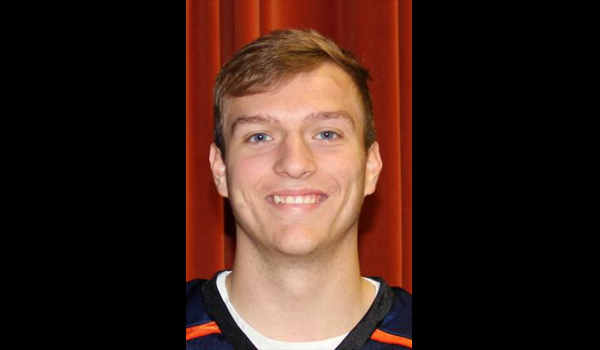 Doniphan West, a 2-1A program in the Twin Valley League, hasn't experienced very much success in football over the last few seasons. In fact, the Mustang seniors have only won six games total in three years prior till their senior season. This season, Doniphan is off to a 2-0 start and starting to open the eyes of people in Northeast Kansas. A big reason for that has been the play of senior receiver, Cooper Leach.

Leach, a 6-foot-4 185 pound senior, is coming off one of the biggest games as far as stats go for a receiver in the history of Kansas. Last Friday, in a 35-34 win over Valley Heights, he caught 16 balls for 261 yards and five touchdowns. That sounds like a season total right? His five touchdowns in a game tied a 11-man state record (four tied) for receiving touchdowns in a game. His 16 passes caught were just three away from the state record of 19 in one game. Leach has season totals of 22 catches for 373 yards and eight touchdowns.

"I am not the biggest guy on the field but I have been using my height and jumping ability as my advantage." Leach said.

Another advantage would be having sophomore Levi Watts as his quarterback. Watts has over 600 yards passing this season and together the two should make one of the better quarterback/receiver duos in 2-1A.

"Everybody is essential to our team being able to win, but Levi playing this well is very important for us. He is a huge part of our team." Leach said.

Football isn't even his best sport, but that may change after a monster start to his senior year. Leach is also an all-state basketball player. May have been easy to guess with his 6-foot-4 frame. He averaged 14.8 points per game for the Mustangs in 2014-2015. He was also named the Most Outstanding player of the 1A-I Tournament from Kpreps after racking up 49 points and 33 rebounds as he led his team to a second place finish in 1A-I.

"Playing multiple sports keeps me active and I believe improves my skill level for all sports. I try to focus all of my attention on whatever sport I am playing." Leach said.

For now its football season and Leach will look to lead his team to a winning season for the first time since 2011. The Mustangs will play Washington County at home on Friday. We caught up with the outstanding senior below.

My parents always encouraged me from a young age to be active.  I started playing soccer and basketball in competition leagues when I was just 4 years old.

What are your individual and team goals this season?

My individual goal is to break the touchdown state record and to make the All-State team.  As for a team, like every other team in the state, we are working to reach the State level.

Who are some of the key players on your team this season?

Every player on my team is key.  Levi Watts is essential to our team being successful, our backs our lineman will hold our ground, and our special teams will get us started in the right direction.

How do you use your size as an advantage as a receiver?

I am not the biggest guy on the field.  I use my height and jumping ability more than anything and hopefully that will continue to lead to positive outcomes.

Are you surprised with some of your big performances in 2015?

I’m not really surprised about my performances, however, I am thankful for the opportunity to show my capabilities.

What did you work on in the off-season to become a better player?

In the off-season, I was extremely active with baseball and basketball.  However, I did lift weights and tried to stay in shape.

How does playing multiple sports make you a better player?

Being active in each season of high school was important.  I believe playing multiple sports throughout the year has driven my skill level and ability level higher.

When it is football season I love football, and when basketball season comes around I love basketball.  I try my best to focus and dedicate myself to the in-season sport.

Plans at the next level, seeing any recruiting interest?

I would love to play ball at the next level.  Unfortunately, I haven’t gotten a lot of recruiting interest, but am hopeful for some in the near future.

What is it like to go to school at Doniphan West?

Doniphan West High is similar to all small schools.  Each student gets a lot of individual attention, but at the same time is expected to work at their ability level.  The teachers and administration personally care about us and love to support us in all that we do.

Like most athletes, my favorite subject in school is P.E.

There are only a few things the average person wouldn’t know about me, but I am very particular when it comes to clothing.  All my outfits must match from top to bottom.  The second thing most people don’t know about me is that I still enjoy watching SpongeBob.