v Faces in KS: Logan Koch - Sports in Kansas 
Warning: include(../includes/bodytag.php): failed to open stream: No such file or directory in /home/kansass/public_html/ks/news/index.php on line 36

Logan Koch of Mill Valley is one of the best dual-threat quarterbacks in Kansas. (Mill Valley News) 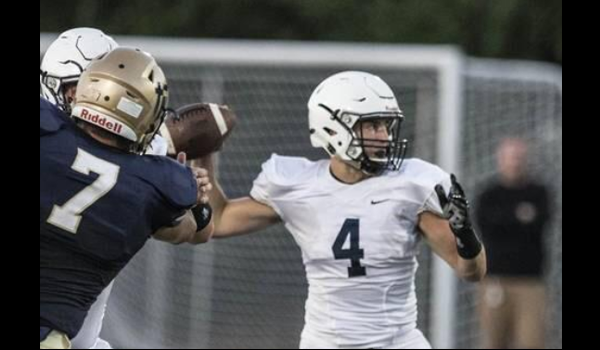 Mill Valley, under head coach Joel Applebee, has become a team on the rise in all of Kansas over the last few football seasons. A big reason for that is the play of dual threat quarterback , Logan Koch.

Koch, a 6-foot, 195 pound senior, helped lead the Jaguars to a 5-5 record last year with one of the most difficult schedules in Kansas. He accounted for 2,209 yards and 22 touchdowns for a team that lost in the first round of the playoffs to Pittsburg. Five wins may not sound impressive after winning 10 games in 2013, but Mill Valley, who plays in the Kaw Valley League, decided to beef up their schedule in 2014. The Jaguars lost four of their first five games in 2014, including losses to Aquinas (5A), Blue Valley Northwest (6A), Derby (6A), and Staley (MO).

"Beefing up our schedule last year showed us that you have to come ready to play every week. It was like playing a district or playoff game every week. I think it really has helped us out coming into this year." Koch said.

Last year proved to be a step in the right direction as Mill Valley won 5 of their last seven games of the season and made the Class 5A playoffs. This year the Jaguars are off to a 2-0 start including a 38-20 victory over then 5A #1 St. Thomas Aquinas in week one on the road. They followed that up with a 40-6 victory over 6A Blue Valley Northwest, a team they lost to last season. Mill Valley will have to get very familiar with both of those teams as they join the EKL next season.

Koch has a huge hand in the 2-0 start. Since his freshman year, more known as a running threat or a running back playing quarterback, he has improved the passing element of his game for 2015. He has thrown for 439 yards, completing 29 of 38 passes for six touchdowns. On the ground, he has 214 rushing yards with another three touchdowns. Koch now has over 2,700 yards rushing in his career.

"My goal for this season was to improve my passing game. I haven't played quarterback very long so I am just trying to get better every week." Koch said.

Koch also knows he is very lucky to have some of the best weapons in the state. Teammate Christian Jegen, a 6-foot-2 200 pound senior, may be the most versatile football player in Kansas this season. Jegen, a receiver, running back and returner, who accounted for 1,654 total yards in 2014, already has 176 yards and two touchdowns this season. Lucas Krull, a 6-foot-7 215 pound senior receiver that has committed to play baseball at Arkansas, also poses as a big threat with 170 yards receiving and three touchdowns after two weeks. Also throw in lineman Ben Hecht, a 6-foot-5 265 pounder, committed to four-time FCS champion North Dakota State.

"Our O-Line and receivers are both big weapons for us. Not only that our guys on defense really stepped up this year to do a great job. " Koch said.

Koch is seeing some recruiting interest in football, but is not just a football player. He also doubles as Mill Valley's point guard and is one of the best in the state. He is still undecided on what sport he will play and what school he will choose next season.

"Being a basketball player helps me in football. I know it may sound different but some of the moves I use in basketball I translate to the football field." Koch said.

Whatever Koch is doing it seems to be working for his 5A  #1 ranked squad in the latest Kpreps poll. This week doesn't get any easier as the Jaguars take on Derby, a 6A power ranked #3 in the state. The main storyline this week is the "Cousin Bowl", Derby head coach Brandon Clark and coach Applebee of Mill Valley are best friends and cousins. Applebee had previously coached for Clark at Derby prior to coming to Mill Valley. Last season Derby won 35-14. Friday's kickoff is scheduled for 7 p.m. at Mill Valley.

We caught up with Logan below...

I got involved in sports by my brothers and sisters playing, I'm the youngest so I was always around it growing up.

What are your goals as an individual this fall?

The goals for the season are to improve my passing game, I haven't been playing quarterback for very long so just improve my throwing year to year and just get better as a team week to week in to the playoffs.

How has this season went so far?

The season has been great so far we have beat two good teams, and we have third one in Derby coming up.

How tough is this Derby matchup on Friday?

Derby is a tough matchup because they are a really good team with athletes, they present a lot of problems.

How big of a weapon is Christian Jegen?

Christian is a huge weapon we can put him in the backfield and get yards or spread him out as a receiver and throw to him for huge yards, he's just such a versatile player.

It's fun to run the ball behind Ben because he can get on the edge and make a block and also pound straight ahead and make blocks.

Who are other play makers to look out for?

Other weapons to look out for is Lucus Krull at receiver he is a huge target with speed, Tristan Milne at running back is a big physical guy, Ben Hartman and Payton Marlow also receivers have great hands, the whole o line I would say is a weapon with the holes they make, and lastly the defense they have been playing great and flying around.

How does playing multiple sports help you as an athlete?

I would say being a multi-sport athlete helps me mostly just by honestly some of the basketball moves i have, I use while I'm running the football. Which is kinda different .

Just how tough is class 5A this year for football?

I think 5a is really tough, I don't know much about the west side of 5a but I know there are some good teams. The east side has a lot of good teams as well.

How did beefing up your schedule help you guys out?

Beefing up our schedule last year showed us that you have to come ready to play every week. It was like playing a district or playoff game every week.

Any interest at the next level?

Yeah I have some interest for both basketball and football but I haven't decided what sport or where yet.

What is it like to grow up in the Shawnee area?

Growing up in Shawnee is great, I mean there's not always stuff to do and me and my friends say we're bored a lot but we're really lucky to live in such a nice area.

Something the average person wouldn’t know about you?

One thing the average person wouldn't know about me is I listen to Taylor Swift before every football or basketball game.