Twins Easton and Erica Montgomery of SE of Saline are ready for big senior year. (The Picture Lady) 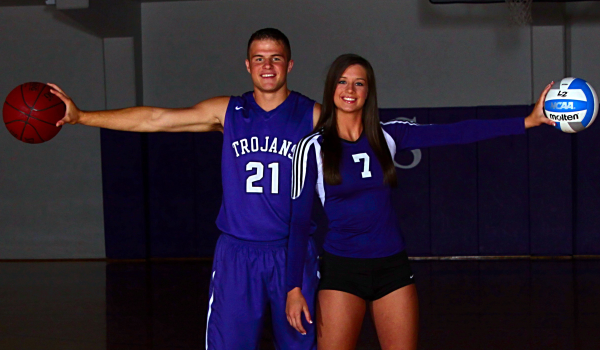 December 27, 1997 is the day that Tonya Montgomery gave birth to a baby girl (Erica) and a baby boy (Easton), little did she and husband, Chris, know the twins would turn out to be such outstanding athletes at Southeast of Saline High School in Gypsum outside of Salina.

Erica began playing both volleyball and basketball at the age of four and has never stopped since then.  She was named to the Kansas Volleyball Association first team all-state in her sophomore and junior seasons, and is well on her way to her third first team all-state award this fall.  She also has won an impressive amount of awards in basketball as well, passing the 1,000 career point mark last season and earning all-state honors from Sports in Kansas.  She has verbally committed  to play volleyball next year at Washburn University.

Easton began playing football and basketball before he can even remember he said.  He remembers he always had a ball in his hand when he was growing up.  Easton has started every game since his freshman year for the Trojans on the hardwood, while racking up a school record 1,111 points, which will continue to escalate during his senior season beginning in November. He broke the 1,000 point mark in the same week as sister, Erica, last season. He is also one of the best tight ends and punters in Kansas, earning first team All Non-Senior at punter last season as a junior from Sports in Kansas.

Both Easton and Erica enjoy having each other as a twin sibling.  When you think of twins, not getting along, getting into fights, and hating each other is what comes to mind.  But if you live in the Montgomery household, you learn to love each other, and get along, you build a relationship that cannot be broken.

“If one of us forgets our book at school, we know we can just use each others.  If we need help with homework or studying it's pretty nice because we can just ask each other instead of trying to call a friend or find time to go in and see the teacher,” Erica Montgomery said.  “My brother is very protective and standing at 6'4” he scares a lot of boys away. He is a very dedicated athlete and pushes me to dedicate myself even more. I believe he is one of my best friends and that I can tell him anything. The only downfall of being a twin, is that my friends talk about how hot my brother is in front of me and it's just weird,” Erica added.

“Having a twin sister is something not very many people get to experience. In my case it is really nice having her. We get along really well and we're there for each other when we need someone,” Easton Montgomery said.  “We always have each other's back and it's nice having someone like her on the sideline every game cheering me on.  Many people that don't know us think that we are a couple because we go to dinner together, shop together, and just like to hang out together. She's truly amazing on and off the court; her dedication is outstanding,” Easton said.

Whether the Montgomery’s are in school, in the gym, on the field or at home, they always push each other to do their best work.  The Trojans volleyball team is currently 9-2 and will look to get back to the class 3A state tournament for the first time since 2013 led by none other than Erica Montgomery.  On the gridiron, Easton will try and help lead his team to a playoff bid, and hopefully farther.  The Trojans are currently 1-1, and will host Russell on Friday night. We caught up with the twins below.

This feature is presented by Express Employment Professionals of Salina (www.expresspros.com), a proud supporter of Southeast of Saline Athletics.

Q & A with Erica Montgomery

Q: What are a few things people don't know about you?

A: One thing people may not know about me is that I really like to sing.  The only bad thing is, I'm terrible at it. Also I think old people are the most adorable people ever!

Q: Talk about this year’s volleyball team and your expectations

A: We know that we can count on each other to take care of the ball and not worry about trying to do everything, we can focus on getting our own job done. I would have to say our team has great chemistry on and off the court which becomes a huge factor when our team is down. We are able to pick each other up and finish the game strong. If we keep working hard and getting better every week I can see us competing strong in sub-state and making it back to state after losing in the sub-state finals last year.

A: My parents are the two people I admire the most. Since my parents are my best friends, I believe I can tell them anything.  Even though what I say may disappoint them, they will be there to help me throughout it all.  They are the most supportive people anyone could ever ask for.  I can always count on them to have my back.  For the last four years they have driven me to practices and state to state to compete at the club level.  Over the years they have taught me a lot about how hard work and dedication will be the key in going anywhere in life.

Q: Do you model your game off of anyone in particular?

A: I do not model my game off of anyone in particular.  I do watch college volleyball which motivates me to push myself to better my game.

Q: Any other interesting facts?

A: I am a 4.0 student.  I am the older twin, which means I get to boss him around:)  My club team won nationals my Sophomore year.

Q & A with Easton Montgomery

Q:  Do you wish to play basketball or football in college?

A:  As of right now I am undecided as to which sport I want to pursue in college.  I love to compete in both sports and it will be a tough decision deciding only to play one.

Q: Do you have any current offers from any schools?

A: Right now the only offer I have received is from Garden City Community College and Butler, but I have had a lot of contact with K-State, Washburn, Wyoming and Simpson.

Q: What are a few things people don't know about you?

A: Something that people don't know about me is that I bake a lot.  Yes, it's not a very manly thing but ever since my grandmother taught me how I've been in love with it. I'm also a straight A student.

Q: Talk about the football season and your expectations?

A: A lot of people thought this year might be a rebuilding year for our program and we want to prove them wrong.  We lost a lot of really good seniors last year, but we have the talent and the work ethic to do great things this season.  I feel that for the remainder of the season we will make it to the play offs and hopefully advance from there.  Taking it week by week.

A: I'd have to say my biggest role model is my Priest, Father Keith.  We have really bonded this past year in our High School Discussion group on Wednesday nights.  He is not only great to talk to about religion but also the day to day issues that arise in my life.  He has really made me a better person and gave me a stronger connection with God.  He always has a positive attitude and has made me rethink the days that aren't going so well.  Because the day is what I make it!

Q: Do you model your game off of anyone in particular?

A: No I do not.  I'm a big fan of college and pro sports but for me, every time I step onto the field or court I try to give 110% of what I'm capable of as a player.

A: I made it to state in long jump last year to turn my ankle  4 days before I jumped.  It was discouraging but after talking to my parents and wanting to have that experience we did a lot of icing and taping and I jumped.  Not my best but the experience was worth it.  Also, my dad played at Emporia State.