v Faces in KS: Brock Monty - Sports in Kansas 
Warning: include(../includes/bodytag.php): failed to open stream: No such file or directory in /home/kansass/public_html/ks/news/index.php on line 36

Brock Monty of Kapaun is looking for a big year as a senior. (submitted photo) 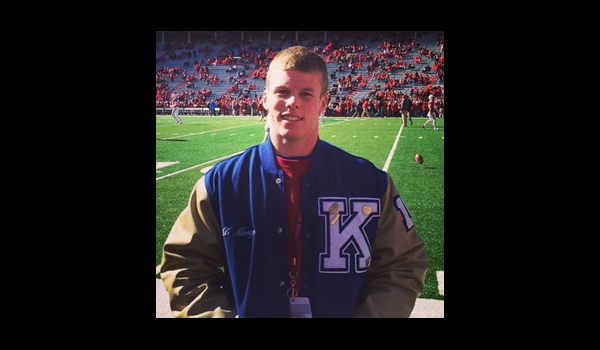 Maybe one of the best overall athletes in the state of Kansas lives in Wichita.  Brock Monty, a 6-2, 205-pound senior at Kapaun Mount Carmel has succeeded in multiple sports throughout his high school career.  Monty mainly known for his football skills, also decided to go out for the track team last spring as something different.

“Wearing Kapaun on my jersey means more than I can put into words.  I think first of Fr. Kapaun.  He lived his life in a way that every person should want to live,” Monty said.  “Also I always have in the back of my mind the tradition of KMCFB. It is a special feeling, and is something I will miss after this fall.”

Monty, who currently holds football offers from Air Force, Cornell and Harvard looks to finish his final high school season out on a high note.  He has thrown for over 2,500 yards and rushed for over 700 a year ago for the Crusaders.  Monty who has a big frame, will more than likely get moved from his quarterback position in college.  Monty has been inspired greatly throughout his life to get him to where he is now.

“My mom and dad have inspired me the most,” Monty said.  “My dad has taught me so much about the game of football and life in general.  My mom has been one of my biggest supporter, if not the biggest.”

When Brock Monty first stepped on the track for the first time, he didn’t expect to make it to the state meet held at Cessna Stadium in late May.  In fact, Monty did track to help him improve on a few aspects that would help him in his football game.  He qualified for both the 100-meter dash and the 4x100 meter relay.  Monty finished sixth in the 100-meter dash, while placing fourth in the 4x100 meter relay in class 5A.

“I did track because I wanted to get faster as an individual.  I had some things I wanted to work on, and accomplished what I wanted,” Monty said.  “I had great coaches in Bob Lida and JK Cornelson, they pushed and helped me so much.”

Monty spent most of this past summer on college visits.  Those schools that he visited include Harvard, Yale, Michigan, Air Force and Colorado.  While Monty prepares for the season, he’s focusing on his senior season first before deciding on college.

“My trips were extremely cool.  I went to a lot of places I have never been, and places I probably would have never seen without the trip,” Monty said.  “I learned a lot, and take away many memories to hold on to for years to come.”

Special thanks to Eddy's Chevrolet Cadillac, who powers all things in Wichita with Sports in Kansas and provides live game day scoring across the state from @scoresinkansas.

Q: What is your status right now on college?

A: Right now I am just focusing on KMC and the season, its all about my team right now.

A: This team has a lot of experience.  It will be a fun team to watch in my opinion.  We are very optimistic.

Q: Who do you model your QB game after?

A:  I like to try and do my own thing.  I would say theres a certain player I watch and say yeah I want to be just like him.  I try to play within my abilities and help the team win the best I can.

Q: What position will you play in college?

A: It depends on the school: some schools are looking at me for QB, others for ATH.

Q: How has coach Dan Adelhardt made you a better player?

A: He has taught me to be a better leader.  He is really good about making sure we do the little things right, and I have carried that over to many aspects of my life.  Because I have figured out what he wants, its easier for me to be a leader for the younger guys, and thats a big advantage for me.

Q: What is one thing that very few people know about you?

A: I didn't start play a full season of QB until my freshman year.  Before that I played a lot of running back, and would play QB every once in a while.