v Faces in KS: Dawson Downing - Sports in Kansas 
Warning: include(../includes/bodytag.php): failed to open stream: No such file or directory in /home/kansass/public_html/ks/news/index.php on line 36 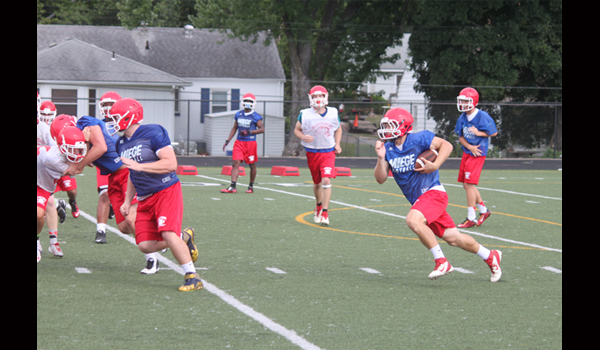 It is very rare to be a 16 year old senior playing high school football. That is until you meet Bishop Miege senior Dawson Downing, who won’t turn 17 until November. Not only is he a young senior, he is one of the best returning players in the entire state of Kansas for the 2015 season.

“Sometimes I wish I were only a junior from a recruiting standpoint, but not really because of what all I have gotten to experience with my team.” Downing said.

Great experiences it would be. Downing, a 6-foot, 210 pound, all-state running back, helped Miege to the first ever 4A-I state title a year ago, rushing for 1,955 yards and 31 touchdowns. Downing emerged as one of the premier football players in Kansas whether he is taking a hand off or catching the ball out of the back field. Miege finished the season at a perfect 13-0.

“Last season was by far the greatest sports moment I have ever had in my entire life.” Downing said.

Not only is Downing a top football athlete in the state, he is also one of the better discus throwers in Kansas. You may be thinking, running back and discus, what? Downing showed his explosiveness by taking third in 4A a season ago at 157-06. He had a season best of 164-06 and looks to break his school record this season.

“I really enjoy track and will do it again this year. I was just three feet off the school record, so I hope to get it this season.” Downing said.

Football runs in Downing family. His dad, Ken, was an all-american defensive back at Mizzou and was drafted by the New Orleans Saints. Younger brother Dylan, now a freshman at Miege, won the National Punt Pass and Kick competiton last year.

Dawson is what I would consider underrated and a big-time sleeper in the class of 2016 in recruiting. It is also still unknown to what position he will play in college. Although a sleeper, he still has two offers at the FCS level. Downing has speed in the 4.5-4.6 range and has a squat of nearly 500 pounds, maxing out at 490 just three weeks ago.

“I plan to play college football next year, I'm just not sure where yet. I have offers from Columbia, Southeast Missouri State, and Emporia State. I've seen interest from a number of schools including Stanford, Duke, Missouri, and Harvard.” Downing said.

For now only one thing is on this seniors mind and that is getting the Stags back to the 4A-I state title game. Miege lost perhaps the best quarterback in the state last season in Ryan Willis, now at KU, but return a lot of experience at skilled positions including all-state caliber wide receivers Jafar Armstrong and Danny Murphy. Also returning on the line is DL Kaelin Key, OL Colin Grunhard, and OL Mark Golubski.

“We have a lot of guys back from last year. Those guys really liked where we ended up last year and we are working hard again to get back there.” Bishop Miege head coach, Jon Holmes said.

Bishop Miege will open up the season on Friday at home against 6A Blue Valley Northwest. Miege will in fact have three straight 6A opponents as it plays in the Eastern Kansas League and will not face a 4A-I opponent until they open up district play in 4A-I in week seven.

My parents signed me up as soon as I was old enough to play.

What are your expectations as a team and an individual for 2015?

As a team, we expect to be state champions. Personally, I want to improve upon last season and become a better leader for my team.

How awesome was it to win a state title last season?

It was, by far, the greatest moment I've ever had in sports.

Who are some of the key players to lookout for Miege this season?

Just how tough is the EKL and how does it help prepare you?

I believe that the EKL is the toughest league in the state. It helps to prepare you because week in and week out you are playing some of the toughest competition the state has to offer.

Do you ever wish that you were only a junior due to the fact you should be by age?

Yes from a recruiting standpoint, but not really because I wouldn't have had the same experiences and opportunities if I wasn't currently a senior.

What are your plans at the next level, offers, and seeing interest from?

I plan to play college football next year, I'm just not sure where yet. I have offers from Columbia, Southeast Missouri State, and Emporia State. I've seen interest from a number of schools including Stanford, Duke, Missouri, and Harvard.

What is it like to go to school at Bishop Miege?

Bishop Miege is an incredible school not only athletically but also academically. We have two senior starters on our football team with ACT scores of 34 and 35.

How does playing other sports help prepare you for football?

Other sports enable you to work on your speed, strength, and explosiveness year round. They also allow you to have unique opportunities dealing with other coaches and situations.

Last year you were one of the better discus throwers in Kansas, do you plan on throwing again in 2016?

Yes, I really enjoy doing track and throwing discus. I was just over three feet away from the school record last year, and I want to go out as a senior with the record.

I have an adopted little sister from Guatemala.