v Faces in KS: Jeff Ast - Sports in Kansas 
Warning: include(../includes/bodytag.php): failed to open stream: No such file or directory in /home/kansass/public_html/ks/news/index.php on line 36

Jeff Ast of Andale is not only the best javelin thrower in the country hes a multi-sport athlete. 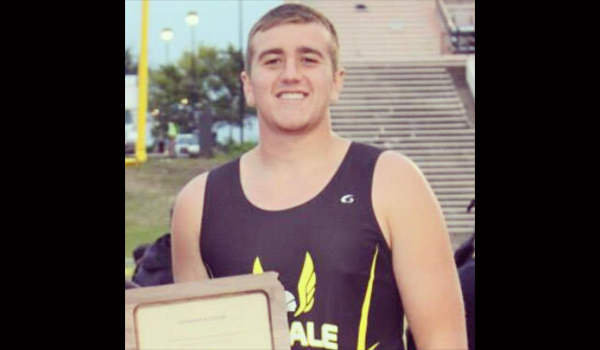 Andale is a known sports town in Kansas, loaded with a lot of nice and talented athletes over the years. Currently on that list is Andale senior, Jeff Ast, who is one of the states elite multi-sport athletes for the class of 2016.

Ast, maybe more known statewide as the nations #1 javelin thrower with a throw of 226-02 in 2015, has the third best throw all-time in the history of Kansas with one season remaining. But it's not just the javelin that Ast excels at.

Ast, who stands 6-foot-5 and weighs 260 after packing on twenty pounds this summer, is also a division one football prospect at tight end for this season after helping lead Andale to the 2014 4A-II state championship a season ago. Ast earned all-league and all-state honors at both tight end and defensive end a year ago. He is also a second team All 4A-I all-state selection in basketball as a junior. Is there anything this senior in the Wichita area can't do?

"Being a multi-sport guy I think helps me because it allows me to be ready and in shape for anything I'm doing. Every sport helps the other. Playing football definitely helps me get stronger and faster for the other two." Ast said.

So you may think Ast is someone who fully concentrates on the javelin, being that he is the #1 thrower in the United States, right? The exact opposite for the three-sport star.

"During my track off-season, I throw very little or any at all. I am worried about competing in the other sports or hitting the weights for all of them in the summer." Ast said.

Ast has had some obstacles along the way and tore his Ulnar Collateral Ligament (UCL) last track season and had to get Tommy John Surgery. It still didn't stop him at the state track meet, capturing the 4A state title, although more than 25 feet off his personal best. Not only that, Ast also medaled in the discus and shot put, and will contend in those events again in 2015.

"Some people have said that after the surgery your arm comes back stronger. I am hoping that once I get to throw this next season, I will still be in that range I was with the 226 or better last season." Ast said.

Right now, only one thing is on his mind and that is defending the 4A-II state football championship this fall. Andale lost several key pieces off a loaded team last year, but are still heavy contenders in 4A-II west.

"Right now its football, but our expectations never change at Andale no matter what season it is and that is to win state." Ast said.

Look for Ast in football, basketball and the field events once again this school year. We caught up with him below...

Special thanks to Andale Farmers Co-Op for major sponsorship on this feature.

I grew up watching my brother and sister. I will always look up to both of them. When I was little I'd always play football or basketball with the neighborhood kids and I loved it

How does being a multi-sport athlete help you?

Well the best thing about it is that I'm in shape basically year round. Every sport helps the other. Like playing basketball helps with footwork for football. Playing football gets me stronger and faster

What is your favorite sport to play?

I really can't decide on that. It's between football and track, I've really grown on football the last few years. Football has me close to my teammates and friends, that's the best part.

How is football and track recruiting going, any offers?

Recruiting is going well, I have football offers from Western Illinois and Missouri Western. I don't have any track offers.

You guys won state but lost a lot, who are some of the key returnees?

We for sure lost a great group of guys. The group of seniors taught us what it takes, so we just have to keep everything going. Bo Knoblauch, he's a linebacker and fullback. Mark Hageman is returning on the O-Line and D-Line. He's a strong kid and can move people. Daniel Bergkamp is returning on the O-Line also, he's a big guy also. Our line is going to be solid. We have a lot of younger guys that are going to step up and be key players this year also.

What will it take for you guys to repeat?

To repeat we are going to have to work even harder, we've been working in the weight room to get stronger this summer. Like I said, losing the guys that graduated is tough, but we know what it takes now. Just have to keep the tradition going.

What makes Andale such a sports town?

Andale is a special town because no matter what sport: basketball, football, baseball, or volleyball, the stands are going to be filled. The community is support is unreal. There's no place better

How good is the weight lifting program at Andale?

I'd say it's one of the best in the state. Coach O'Hair and Coach Schmidt really know their stuff. They push us, and we push each other to get better every day.

What do you do to become better in the off-season, if you have one?

During the summer I mainly focus on the weight room. We have all of our team camps for basketball and football, those definitely make me a better player. I usually play MAYB basketball but I couldn't this summer because of my surgery

What are your goals this season in all sports?

No matter what sport it is, it's always to win state. Andale has a great tradition. It's our job to keep it going

Will we see a throw of over 220 again in javelin, how’s the injury holding up?

I sure hope we do. About everybody I've talked to say when people have Tommy John surgery their arm will be stronger than ever. So hopefully I can recover to where I was and even beyond

Well I love the outdoors. Hunting and fishing. Our team is very close, there's nothing better than spending a day with them at the lake, or going hunting with Hunter Knoblauch and out shooting him.