v Faces in KS: Eli McKee and Blake Beckett - Sports in Kansas 
Warning: include(../includes/bodytag.php): failed to open stream: No such file or directory in /home/kansass/public_html/ks/news/index.php on line 36 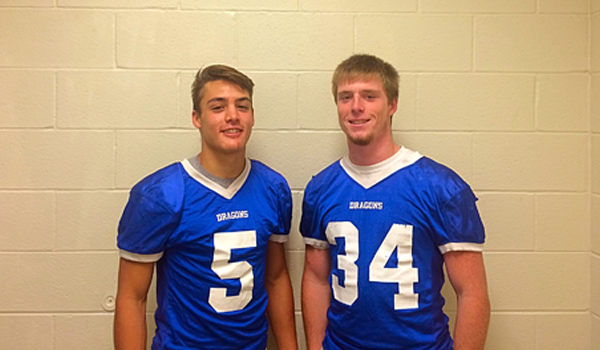 Jason Grider came into Halstead a year ago looking for a successful football team.  He got that and more, as the Dragons made it to the class 3A state semifinal game against Scott City last November.  No one had expected them to be there, they were the “Cinderella” of class 3A.  A big part of the Dragons’ 10-3 record was from two key players, Blake Beckett and Eli McKee.

“It has been very rewarding to coach two young men with the character of Blake and Eli.  They are not only great athletes but they are extremely hard workers and team players,” Halstead coach Jason Grider said.

Quarterback Eli McKee had not taken a varsity snap as quarterback before last season, when Grider put him up to the task.  McKee excelled at the position and turned a lot of heads not only in the community of Halstead, but across the state.  You wouldn’t think someone that had never taken a varsity snap under center would run for 1,378 yards and 21 touchdowns, including five games with over 100 yards rushing.

“It was a dream come true, I loved having the ball in my hands every play,” Eli McKee said.  “I knew whatever play was called, I would be touching the ball, and being able to be apart of the play.”

When McKee was not touching the ball, he was usually handing the ball into the belly of Blake Beckett, the leading rusher in class 3A last season.  Beckett is a workhorse and will carry defenders with him, as he is always driving his feet.  Beckett ran for 2,101 yards on 201 carries with 24 touchdowns rushing.  The Dragons offense was so powerful, they outscored their opponents 497-247, averaging out to 38 points a game, which is phenomenal in any classification.

“People don’t realize how much the offensive line does for not only me, but Eli as well.  They’re the big guys up front that make the plays happen,” Blake Beckett said.  “If it weren’t for them, none of the touchdowns would’ve happened last year.”

The Dragons are back in full force this year as they return not only McKee and Beckett, but 6-foot-7 tight end Tate Kaufman will be required to do a lot of blocking again this year.  He’ll anchor the offensive line to make big plays possible.  Both McKee and Beckett are excited for the first game under the lights this season, as they have high expectations after a year ago.

“We want to get a little bit better each day and the guys understand in order to do that you have to work extremely hard and be extremely focused and they've proven they can do that,” Grider said.  “If we can continue to improve we have a chance to be a very good football team.”

We caught up w/ Eli and Blake Below.

Major sponsorship provided by Halstead Bank, a proud supporter of Halstead Athletics. Best of luck to the Dragons in 2015

Do you plan to play athletics in college?

I don’t plan to continue playing after high school.

Who has inspired you the most in your football game?

Whole family. Mainly my dad, because he is the one who planted the seed in all of us.  He showed us that it’s so much more than just a game.

What is it about last year’s success that will carry over to this year?

Confidence.  We saw that we could do it.  Everyone on our team believes now.

The love for football was installed at a very young age.  So young I can’t even recall.  Some of my best childhood memories are being a ball boy for my dad on the sidelines.

Do you plan to play a sport in college?

I’m still not sure what I plan to do in college.

Who has inspired you the most in your football game?

I would say that my biggest inspiration has always been my dad.

What is it about last year’s success that will carry over to this year?

My family is my biggest fan.  They inspire me to keep working hard day in and day out.

Last year’s season ended with an OT loss to the 3A state runner-up (Scott City), how will this year’s team be?

This year’s team is looking good, we had a good attendance throughout summer weights and are excited to get the season started.