v Faces in KS: Trey Teeter - Sports in Kansas 
Warning: include(../includes/bodytag.php): failed to open stream: No such file or directory in /home/kansass/public_html/ks/news/index.php on line 36 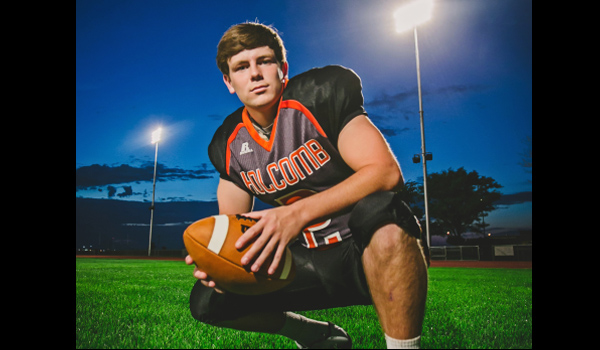 Teeter, a 5-foot-11, 180 pound all-state quarterback, transferred to Holcomb at the beginning of last football season after his dad, Kent, received the head coaching job after coming from Goodland.

“It’s always hard to leave your friends and memories. We knew this would be a great opportunity for us and to be closer to our family. The community of Holcomb has been awesome to us. My teamates have really made the transition easy. It also helps my cousin, Kaden Tichenor, is here and gets to play next to me.” Teeter said.

Teeter had an immediate impact at Holcomb last season as a junior, which wasn’t surprising after two very good seasons as the starter for Goodland. In fact, last year was the best season he’s had, passing for 2,082 yards, completing 62 percent of his passes with 24 touchdowns. For his career, he has 5,020 passing yards and 55 touchdowns in 31 career starts. Players are only guaranteed 36 total games in high school over four years and with one full year left Teeter has nearly passed that in starts.

Teeter is also a national caliber javelin thrower, throwing in the states toughest classification (4A), where to even make state you had to be ranked nationally in last years regional who featured Jeff Ast of Andale, the nations #1 thrower. Teeter has taken fourth and second at AAU Nationals in javelin and it may be something that he plans on doing in college.

“We have a good enough relationship to come home after practice or games and talk. We have a lot in common and are close. The challenging side is having to always prove that I’m good enough. Another downside is that he can come home and say whatever he wants and I just have to be quiet.” Teeter said joking.

Holcomb, who finished 10-2 last season, is primed for a big run in 4A-II this season. Some people have the Longhorns being the favorite on paper to get to the title game. Last season Holcomb’s only losses came to the 4A-II state champion, Andale, and the 3A state runner-up, Scott City, in regular season.

“We have worked really hard this summer and have a lot of kids returning from the nice year we had in 2014. We are definitely looking forward to this season.” Teeter said.

A lot of returning players is exactly right, especially at the skill positions. Teeter will have targets Christian Merz, Brandon Showalter, Brandon Stegman and Conner VanCleave, who make it hard for any defense to key on one specific receiver. VanCleave, a 6-foot-6 junior, is one of the state’s best multi-sport athletes earning 4A-II pitcher of the year in baseball, all-state in basketball and being an all-state tight end and defensive end candidate this season. Holcomb also returns junior all-state candidate Dillon Williams at running back and linebacker as he racked up over 120 tackles as a sophomore in 2014. Aaron Hernandez was an All 4A-II lineman last season as well and will look to have another big year. It also helps several of the Longhorn players got experience of winning a state title as they won 4A-II state basketball in 2015.

Holcomb is loaded on paper in 2015, do they have enough to get it done this season? Find out below as we caught up with Trey Teeter below.

This feature is brought to you by Ron’s Market in Holcomb, a proud supporter of Holcomb Longhorn Athletics. Be sure to check them out at 106 E. Jones Avenue in Holcomb.

I have grown up in a sports family. My Dad has coached football and track for 26 years and has been a head coach for 15 of those years. My mom has also coached softball and basketball, so it wasn't uncommon for me to be at practices every day growing up.

What is it like to play for your dad?

Having my dad as a coach has been both rewarding and challenging at times. We have a good enough relationship to come home after practices and games to talk and continue to improve. We definitely have a lot in common and are close. The challenging side is having to always constantly prove that I'm good enough to be in the position that I'm being put in. Another downside is that he can come home and say whatever he wants and I just have to be quiet ;).

Was it hard to leave Goodland last year to a new place?

It's always hard to leave your friends and memories. But we knew this was a great opportunity for us to move and be closer to our family.

What has Holcomb been like for you so far?

The community of Holcomb has been awesome for us. My teammates have made the transition easy for me. Also getting to play next to my cousin Kaden Tichenor has been sweet.

Holcomb looks loaded on paper is this true for 2015?

We have worked really hard this summer, and we have a lot of kids returning. We are definitely looking forward to this season and hope to keep the success from last year rolling.

What will it take for you guys to be really good?

For us to be good we need to stay healthy, play together as a team, improve each week, learn from our mistakes and stay focused on our goals.

What did you do this off-season to become a better player?

This summer I showed up to weights every single day, and worked really hard on becoming stronger. I went to several football camps. I also participated in several basketball tournaments, and track meets.

What are your plans at the next level?

I am undecided at this time on what college. I am definitely hoping to play football and/or throw the javelin at the next level.

What other sports do you play?

I am involved in football, basketball, and track and have played baseball in the past.

What is one strength and one weakness for you as a quarterback?

One of my strengths is understanding every position of our offense, and I understand defenses enough to put our offense in good positions. One of my weakness is that I'm a quarterback in a spread offense who thinks I can complete every single pass especially if it's a deep ball. And I'm not 6'5 with a 4.4 40 ;)

I enjoy science and of course weights.

One thing the average person wouldn't know about me?

My grandfather was once the head coach at Holcomb High School in the late 1970's and early 80's, and my uncle is a Major League Umpire.