v Faces in KS: Jake Tiernan - Sports in Kansas 
Warning: include(../includes/bodytag.php): failed to open stream: No such file or directory in /home/kansass/public_html/ks/news/index.php on line 36

All-State QB Jake Tiernan has transferred to Solomon from Osborne for his senior year. 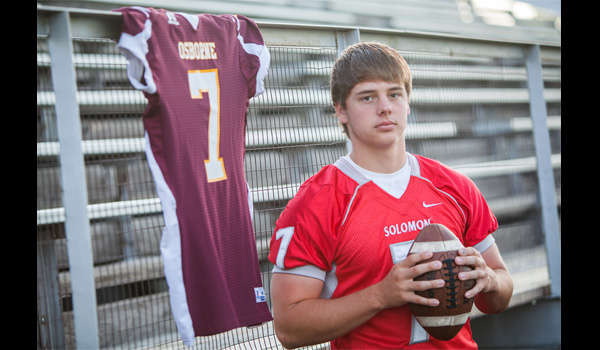 When it comes to accurate passers in the state of Kansas look no further than Solomon senior Jake Tiernan (6-1 195 QB). You may be thinking, Solomon, what? That's because Tiernan, an all-state selection the past two seasons at Osborne has transferred to Solomon this season after his dad, Steve, a longtime 8-man coach at both Osborne and Baileyville B&B, took the head coaching job after last season.

One may think Osborne would have been tough for both Tiernan's to leave. Two years ago Jake, the sophomore quarterback and his dad, the coach, led their team to the 8M-I state title and are now both at a brand new school with brand new players.

"It was a tough transition at first but the community around Solomon has really accepted my family and I," Jake Tiernan said.

We do know one thing, Solomon is getting a really good quarterback and coach. In addition to leading Osborne to the state title two years ago, Jake also broke the 8-man state record for single season completion percentage. Tiernan completed 100 of 129 passes for a 77.5 completion percentage. The all-time career record is 60.7%, set by Kirby Rust of Kensington from 1986-1989. That record is in serious jeopardy as Tiernan enters the 2015 campaign with a career percentage of 72.1. Not only that, he also has 4,996 career passing yards with 79 career touchdown passes as a four-year starer.

What makes this 8-man star such an accurate passer?

"My goal is to throw a catchable ball every time I throw. I want to put it where my receivers can get it and the defenders cant." Tiernan said.

So playing for your dad would be pretty cool, but it also could be very difficult. Tiernan loves the experience.

"Its pretty cool. On the field he is just a coach. If you didn't know us you wouldn't know he was my dad." Tiernan said.

The Gorillas of Solomon went 4-5 last season and return seven starters off last years team including Cain Fowles, a quarterback last year, who may figure in to be the top receiver target for Tiernan in 2015.

"If we get a middle three playing well then I think we have a chance to be good. We have the athletes." Jake said.

We caught up with the 8-man record breaker below...

From kindergarten to sixth grade I rarely missed one of my dad’s football practices, and was a manager for multiple years. As a grade schooler I played baseball in the summer and basketball in the winter. I’ave always enjoyed competing, whether it was a family board game or a town team basketball game.

What is it like transferring right before your senior year to a new school?

It was a tough transition at first but the community around Solomon has really accepted my family and I.

Was it hard to leave a place that you won a state title at just two years ago?

What are your goals this season at Solomon?

The goal is the same as every year which is to get better every week and eventually contend for a state title. Before the season that is what we are expecting and we don’t want anything less.

What will it take for you guys to contend this season?

My teammates will have to buy into my dad’s system. It has worked in the past and if we can buy in I think we could be a contender.

It’s a pretty cool experience. On the field he’s just a coach, if you didn’t know us you wouldn’t know he was my dad. He treats me just like all of the other players. We rarely bring anything from the football field home. Occasionally we will watch film together and he’ll ask me questions about what I think will and won’t work. But at home he’s just a normal dad.

Who are some of the players to look for on your team?

We have 11 total seniors on the team that will all see substantial playing time. It’s always good to have lots of seniors on the team. Junior Nathan Webb has good speed, and speed is a good thing to have in 8-man football. Also, freshmen Jobe Fowles and Braden Nielson have good size and are athletic enough to see some playing time this year.

What have you done in the offseason to become a better player?

Lifting weights most evenings and going to summer weights in the morning have kept me in good shape, and playing baseball helped strengthen my arm. I went to a couple camps to fine tune some things in my throwing motion. I also played 7 on 7 at the camps and we had a 5 on 5 passing tournament in Solomon for 8-man schools this summer.

How are you such an accurate passer?

I just try to put the ball where my receivers can get it and the defenders can’t. For every throw my goal is just to throw a catchable ball.

One thing a former coach of mine told me is to calm down and let the game come to me. I really focus on doing that and I try to stay calm in high-pressure situations. One weakness is my habit of trying to do too much. For example, I try to extend a play by getting out of the pocket too quick and scrambling. Sometimes it does work, but it’s dangerous and could just as easily be an interception as a touchdown.

To someone who has never seen an 8-man game, why should they check it out?

Is there anything better than playing small town football on Friday night?

No way! Having the whole town there rooting you on is a great feeling you will never forget.

I play baseball, basketball, track, and golf as well. I love golfing on my free time in the summer.

What do you plan on doing at the next level, seeing any interest?

I am planning on waiting until after football season to start thinking seriously about college. I’m not sure where I want to go and what I want to major in yet. I have had a few schools in the surrounding states showing some interest.

On the weekends during football season you can find me in a tree stand hunting deer! I love hunting and fishing.