v Sports in Kansas: 25 Specialty Players to Watch in 2015 - Sports in Kansas 
Warning: include(../includes/bodytag.php): failed to open stream: No such file or directory in /home/kansass/public_html/ks/news/index.php on line 36

Sports in Kansas: 25 Specialty Players to Watch in 2015

Wesley Burris of Olathe East is one of the top long snappers in the class of 2016. (submitted photo) 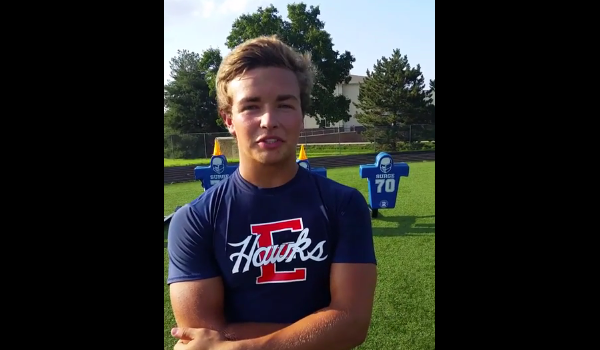 Special Teams: One of the harder lists to break down that is often forgotten, but one of the most important. Often specialty players don't get the recognition some deserve in high school due to the kicking game not utilized at a lot of high schools or the personnel. This list from Sports in Kansas is brought to you by Cantele Kicking, offering specialty position player camps (Kicker, Punter, Snapper) in Kansas. Visit them online here

Although these guys aren't on the field a lot, when they are it's very important. Listed below are some of the top Kick/Punt Returners, Punters, Kickers and Long Snappers for the 2015 season in Kansas.

(Players are alphabetical by last name - not ranked)

Burris, ranked as a four-star long snapper in the country, has over 150 in-game snaps in which none have been bad. Burris features great strength, benching 285 pounds and squatting 385, while showing the ability to cover with some decent quickness. With a little added weight, currently standing 6-foot and 195 pounds, he should be college ready in no time. Don’t be surprised to see him on a division one roster next fall.

Cedeno is one of the top punting prospects in the state of Kansas. Cedeno was heavily used on a team that won one football game a year ago. Cedeno has been ranked as high as the #3 punter in the country according to NCS National Rankings for the class of 2017.

Not only is he one of the most recruited defensive backs in the state, he also gets a nod as a return man to watch for in 2015. Collins averaged over 18 yards per touch on kick/punt returns in 2014.

The KU baseball commit is also one of the top returning football players in the state for 2015. Cosentino, who also made the list as a running back, averaged over 30 yards per kickoff return in 2014 over the nine games he played in. He had over 100 yards in kickoff return yardage in three contests last season. He also rushed for 1,296 yards at running back despite missing the playoffs because of injury.

Diddle had a field goal long of 47 yards last year as a junior. He is also 53 of 58 in his career on extra points. In the last two seasons he has made nine field goals, including five last season. He is a very valuable asset to score anytime his team is passed their opponents forty yard line. He played at Olathe East last year and has transferred to Olathe Northwest.

Field features nice size at 6-foot-3 and 205 pounds and over half his kicks went for touchbacks in 2014. He earned first team 8M-II honors from Kpreps as a junior.

Not only did he rush for over 1,000 yards as a sophomore, he picked up over 600 more from kick and punt returns in 2015. Look for another big year.

Horak didn’t have to punt much but when he did he looked good, pinning two inside the twenty yard line in 2014. He also looked great as a return man when they did use him, having a 21.8 yards per punt return average Although, he is the top returning QB in the state, he can be a threat on special teams if they don’t need to rest him. There isn’t much this kid can’t do on the football field. Colleges think he has the ability to be a return man at the next level.

Jegen has made the list on offense, defense and now special teams. He may be the best multi-position player in Kansas and his stats show it. He had over 1,100 yards of offense and over 500 return yards in 2015. He will be a premier playmaker in the KC area once again.

Johnson is one of the better kickers in Kansas. He is kept very busy at a school that scores a lot of points. Johnson earned first team all-league honors last season in the AVCTL IV for the 4A-II state champion Indians.

Kropp averaged 19.2 yards per punt return (1 TD) and 20.6 per kick return in 2014. He also rushed for over 1,000 yards as a running back. He will be one of the premier 3A players when he has his hands on the ball in 2014. Kropp is an all-purpose back capable of taking it the house on any given play.

Lee has performed well at several camps and combines and has been ranked in the Top 25 kicking prospects in the country for 2016.

Although Lemons played behind two of the best return man in the entire state in Darreon Jackson and Curtis Whitten, he will get his chance to shine in 2015. Lemons is a receiver first but a bit of an all-purpose back capable of getting it done on the ground or the air. He is seeing division one interest at the next level and will be one of the premier return men to watch this season.

Lively is very dangerous with the ball in his hands. He had over 450 return yards last season and another 600 rushing yards. He also had three interception returns for a total of 72 yards.

Moeder is back after earning first team all-state honors in 6A last season. He gives the Panthers a threat to put points on the board on fourth down in 2015. He was also a first team All-AVCTL I punter last season.

In addition to being one of the better basketball players in Kansas and a tight end to watch for 2015, Montgomery was near the top in the state for punting last season averaging over 35 yards per punt. He had a season long of 72 in 2014 and earned first team non-senior honors from Sports in Kansas.

Scarlett was five of six on field goals in 2014. He also had a long of 40 for the year. He was 50 of 54 on PAT attempts last season as a junior. He was a first team All-2A selection as a junior.

Renoux can play multiple spots on the field and is one of Kansas’ best return men. Two years ago he had a punt return that was featured on ESPN Sports Center Top 10 Plays.

Schoonover had a long of 42 as just a freshman last fall. He will be one of the top sophomore specialty players in the state this year. He gives his extremely talented returning offense an option on fourth down in 2015.

Southwell was 100% last season on seven field goal attempts. Although just a long of 31 in 2014, he shows great accuracy. He was also 31 of 33 on PAT attempts as a junior. Southwell has been ranked as high as the #7 kicking prospect in the Class of 2016. Southwell was first team All-4A in 2014.

Bryce Torneden, Free State Sr. Kick Returner
Much like Tucker Horak of Rossville, its just if his team needs and wants to use this multi-position star. Not only is he one of the best quarterback returnees in the state, he doubles as a great defensive back. When the ball is in his hands he is a game changer returning kicks.

Winter has performed well at several showcase camps and shows the ability he has range in the 40-50s. He will also be one of the top punters in the state this season.

In addition to be one of the top play makers in 3A last season, Yoxall also has a leg on him. He made eight field goals in 2014, including a long of 41. He was a first team All-3A selection in 2014.

List was compiled by Chet Kuplen of Sports in Kansas with input from Anthony Cantele of Cantele Kicking. Cantele is a former All-American kicker at Kansas State that played at Kapaun in high school