v Sports in Kansas: 25 Defensive Backs to Watch in 2015 - Sports in Kansas 
Warning: include(../includes/bodytag.php): failed to open stream: No such file or directory in /home/kansass/public_html/ks/news/index.php on line 36 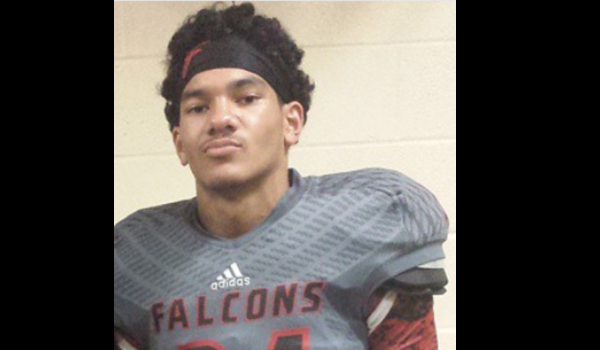 Several players return after having big seasons as defensive backs in 2014. Check out who some of them are to watch in Kansas for the 2015 season.

(Alphabetical by last name - not ranked)

Baird will be one of the better multi-position players in 3A for 2015. He is one of 3A’s top returning safeties as he logged 58 tackles as a junior. On offense he is scheduled to be the quarterback, but at receiver in 2014, he caught 20 balls for 374 yards. He is one of only two returning starters on the Lake defense.

Calvert picked off six passes last year in 12 games for the Cougars. He earned first team all-league honors and was also credited with 84 tackles as a junior.

Carter had a big season as a sophomore in 2014, earning second team all-league honors in one of the best leagues in Kansas. He will look to lead a Derby team to its second title appearance in three years.

Castelli returns for his third year as a starter in the defensive backfield for the Mustangs. He earned second team all-conference honors at defensive back as a junior last season.

Collins earned second team all-conference in one of the premier leagues (EKL) in Kansas for 2014. He has several offers at the FCS level and should be without a question one of the top defensive backs in the KC metro for 2015. Collins has speed in the 4.5 range in the forty-yard dash. His father, Mark, played in the NFL.

Crawford had over 100 tackles from his strong safety position in 2014. He earned first earned first team All-AVCTL II honors and will look to lead a Hornet defense that returns five starters in 2015.

Dunbar is back after registering 98 tackles last year as a junior. He will look to lead the Salthawk’s defense back into the 6A state title game. Hutchinson doesn’t return a lot but many players got playing time last season because of injuries suffered.

Gordon earned second team defensive back honors from the EKL league coaches in 2014 and will look to lead the Mustang defense in 2015.

Harris has started since he was a freshmen at Pittsburg High and earned first team all-conference honors as a sophomore in 2014. He is a lock down corner and makes up his small size with his strength and speed. Expect another big year for Harris in the SEK League. Pittsburg may feature one of the better defenses in 5A, adding senior all-state caliber transfers Zack Roark from Columbus and Sherrick Rogers from Chetopa, who are both also defensive backs. Also add in the highly recruited Trevor Kent (6-5 245 Jr) at defensive end and all-state linebacker Will Mengarelli.

Hutchins is one of the top returning defensive backs in the eight man ranks as he had six interceptions in 2014. Hutchinson also had 73 tackles. He will also carry the load on offense as he rushed for over 1,200 yards as a junior.

Jegen is one of the best multi-purpose players in the state. He will be a three year starter on both sides of the ball and enters with over 70 career tackles and three interceptions in his role on defense. Jegen will be one of the premier players to watch in 5A on the offense this season, whether he is playing receiver or out of the backfield. He is also one of the best kick returners in Kansas.

Jones had a monster sophomore campaign in which he picked off five passes to lead his team. He will team with Christien Ozores to form one of the better defensive backfields in 6A this season. JC returns 10 defensive starters.

Knutson is back after having a big year in 2014 as a junior. He earned second team EKL honors and will be one of the defensive backs to watch for in the league once again this season. Knutson also figures to be the quarterback for the Huskies.

Besides rushing for over 1,300 yards from his quarterback position last season, McKee also helped lead the Dragon (10-3) defense with over 100 tackles from his defensive back position. McKee and teammate Blake Beckett form one of the better offensive/defensive duos in Kansas for 2015.

McKinney was second in the Sunflower League in interceptions with six interceptions last year. He returns with seven other starters to help lead the Viking defense in 2015.

McPherson is one of the most underrated player in Kansas, partly because he missed a lot of time last year with injury. He has had a great offseason and has an offer from North Dakota at the FCS level. He has 4.5 40-yard dash speed and a 33” vertical.

Nichols earned first team all-city league honors as a junior last fall. He returns on an Golden Eagle defense that captured the 5A state title in 2014.

Ozores returns for his third year as a starter at cornerback for Junction City. He has earned all-league honors twice and is one of 10 returning starters on the Blue Jay defense.

Not only did he make the wide receivers list, Parnell also is a defensive back to watch. He picked up 69 tackles last year and intercepted four passes. Parnell has committed to play division one basketball at the University of Central Arkansas.

Sanders may be the top overall athlete in Kansas. In track and field he is one of the best hurdlers in the state. He picked up the javelin as a junior, only to end up as a state champion and ranked in the top 10 in the country. He also is an all-state caliber baseball player and swims for his high school. He has an offer from Northern Iowa in football. Is there much this kid can’t do?

Schilling is one of the top returning defenders in the state for 2015. He picked off five passes and had 78 stops last year from his safety position. He earned first team non-senior honors from Sports in Kansas and will be relied upon heavily to get the Saints back to the 5A state title game. Schilling has a few FCS offers on the table including heavy interest from the Ivy League.

Without a question the top defensive back prospect in the state for this football season. Simmons led the Sunflower League in interceptions as a sophomore and followed up with an all-state campaign as a junior in 2014. He is also a two-time 6A long jump champion and has over 10 offers at the FBS level. His brother, Victor, played football at the University of Kansas.

Thompson will look to be one of the better cornerbacks in the Sunflower League this season after transferring from Bishop Miege. He earned all-conference honorable mention honors from the EKL coaches in 2015 after starting on the 2014 4A-I state championship team.

Although he returns as one of the best signal callers in Kansas, Torneden had a big year at defensive back last year intercepting two passes and picking up two fumble recoveries. Depending on depth this season, he may be asked to play some more reps at defense. He has committed to play at four-time FCS National Champion, North Dakota State.

Weakley has had a big off-season, growing two inches and packing on twenty pounds. He also picked up an offer from Emporia State. Weakley was a second team all-conference pick last season after picking up 45 tackles and three interceptions. He features a 4.6 40-yard dash and a vertical of 39 inches.

ADDITIONAL: this list was so hard to break down to just 25, some additional names to look for in 2015.

List was compiled by Chet Kuplen of Sports in Kansas with input from Ben Mitchum of SB Nation.