v Faces in KS: Isaiahh Loudermilk - Sports in Kansas 
Warning: include(../includes/bodytag.php): failed to open stream: No such file or directory in /home/kansass/public_html/ks/news/index.php on line 36

The recruiting process has been a family thing for West Elk's Isaiahh Loudermilk. (submitted photo) 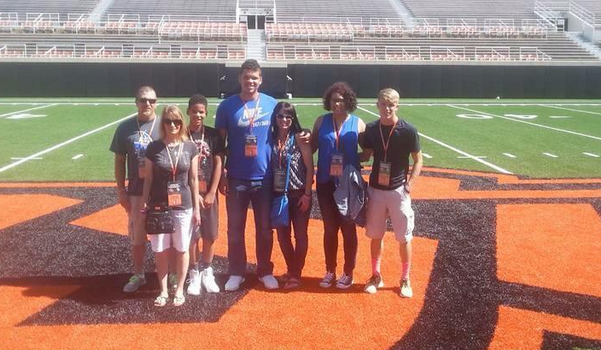 Football recruiters all across the country have made their way to the tiny town of Howard, Kansas which features a population of just under 700. In Howard, you will find 8-man Division I West Elk High School, which features one of the top football prospects in Kansas for the class of 2016, Isaiahh Loudermilk.

At this time last year, Isaiahh was around 6-foot-6 235 pounds heading into his junior year with zero division one offers. Fast forward to August of this year, the senior, now 6-foot-7 and weighing 283 pounds, has 12 FBS offers.

“Its been unbelievable and very exciting for everyone around it. Couldn’t happen to a better young man. Deep down we thought he could do this, but I’ve been blown away by the national attention and it's not stopping." West Elk Head Coach Chris Haag said.

The whole recruiting process has been a bit of a surprise for Loudermilk.

"I never expected to get over 10 offers at all. I wasn't even sure I would get any division one offers. It was a surprise for me when I got the first one and from then on its been very exciting, because I never thought it would happen." Loudermilk said.

So what makes this 8-man lineman from West Elk High School so special that he is gaining the interest of college coaches from nearly every major college conference in football? The key word is versatility.

"He can play tight end, nose guard, defensive end, offensive line, long snap, he even kicks off sometimes. What makes him is he can play a lot of positions and he plays multiple sports. That adds value to him for recruiters, if he were to ever have to make a position change in college he would be ready for it. I think where he really shines is on the interior lines whether its defense or offense. It depends on what team is recruiting him whether he is being looked at for offense and defense or both." Haag said.

West Elk has had some good athletes over the years, but never a division one coach walking through the hallways.

"Arizona State was one of the first to come through here and I told their coach he was the first division one coach to ever walk through the hallway at West Elk. He then told me when it was all said and done with Isaiahh he definitely wouldn't be the last." Haag said.

The coach from Arizona State was definitely right as recruiting interest hasn't shut off for Loudermilk since it started back in February. So how does a high school junior handle all this national attention?

"Hasn't changed him one bit. That's the best thing about him. He appreciates any offer he gets whether its a division two or FBS. He just wants an opportunity to play college football." Haag said.

Living in Howard is something Loudermilk takes great pride in, although he has national attention, he won't let that change him.

"Being from a small town and getting national attention from schools is something I wasn't sure happened very often. Growing up in Howard has been absolutely wonderful. Its a great community and the people are are great. They have all been so supportive of me the whole way." Loudermilk said.

In a day and age of social media, YouTube, and HUDL it is definitely safe to say it helped in bringing this kid out of 8-man Kansas to the national recruiting scene. Even a list sent to college coaches of top prospects is a technique that was used in generating an early offer for Loudermilk. We live in a day and age where sometimes you have to put yourself out there and it can spread like wildfire after a few offers come in.

"It's been a little bit of everything. Someone sent a list of top players in Kansas to Wyoming and it generated enough interest for them to reach out to him. From then on it kind of exploded. I have sent some emails and when I did some of the coaches didn't know about him and not much longer after some of those emails offers came in." Haag said.

Loudermilk is also an exceptional basketball player. Leading the state of Kansas in rebounds as a junior this year pulling down over 14 per game. He is also a great student with a 3.8 GPA.

"He has a really good GPA, he has an ACT I believe of 24 or 25. He's been cleared academically to Vanderbilt, so that gives you an idea that he's a very intelligent kid." Haag said.

Opposing players are probably ready for Loudermilk to graduate. Matching up with a kid over 6-foot-7 and overly strong in the weight room isn't any easy task, especially in the lowered enrolled 8-man classification.

"No disrespect to anyone, because there are some very good players in our league, but there's nobody in our league that can match up with him. I've seen him throw around 6-foot-1 250-pound kids like rag dolls." Haag said.

Loudermilk also credits Coach Haag on pushing him every day to get better.

"He was my physical education teacher in grade school, so I have known him since I was little. He expects the best out of everyone. He is a great coach." Loudermilk said.

Loudermilk has had to deal with a lot this off-season. His cousin and teammate, Damon Wilson, passed away in a car accident in late May. Damon was a sophomore at West Elk. West Elk student, Reid Wilson, also died in the crash. It really hit the small community hard, where everyone knows everybody.

It has made his entire family even closer than they already were.

"I think it has helped us grow even closer than we already were, if that is even possible. We don't go anywhere without each other." Tristen Wilson, a 2015 West Elk grad, brother of Damon and cousin of Isaiahh said.

This season will be an emoitional one for the Patriots.

"Damon was and is West Elk football. He was a huge part of our team. Damon and Isaiahh had played together since youth football. Although he won't physically be on that field he will be in Isaiahh's heart. He will play for him this season and throughout his football career." Loudermilks mom, Stacy Howell said.

A lot of the hype has been put on Loudermilk's recruiting this off-season, but he's just ready to play football for the Patriots this fall.

"The team will be good this year. Our running back Armando Gomez will be a player to watch once again. We are ready for the season to start." Loudermilk said.

Loudermilk hasn't decided when he will make his much anticipated decision on where he will play college football. He has FBS offers from Arizona State, Colorado, Iowa State, Kansas, Kansas State, Minnesota, Missouri, Oklahoma State, Texas Tech, Vanderbilt, Wisconsin and Wyoming.

"I'm going to take a few more visits and go to a few games and then when I'm comfortable with wherever it is I'll make the decision. I'm guessing the end of the season." Loudermilk said.

We caught up with the small town star below...

This feature is presented by Howard State Bank - your hometown team supporting the Patriots.

I have been involved in sports ever since I was a little kid. I played baseball and basketball when I was young.  I never really started playing football until I was about in 4th or 5th grade. But ever since then I have loved playing it.

The recruiting process has been fun so far. I've enjoyed taking a few visits and it's just been fun for me. It's also great that my family has got to experience this with me also

Did you ever expect this to happen?

I never expected to get over 10 offers at all. I wasn't even sure I would get any D-I offers. It's was a surprise for me when I got the first one and from them on its all been exiting. I never thought it would happen

Being from a small town and getting national attention from schools is something that I wasn't sure happened very often. We lived in Wichita until I was in second grade and when we moved to Howard it was much different.  I always thought I would have to move to a bigger place to get seen by any colleges

What is it like to grow up in Howard?

It has been absolutely wonderful growing up in Howard. It is such a great community and the people here are great. They have all been so supportive of me the whole way.

What is it like to play for head coach Chris Haag?

Coach Haag is a great coach. It has been fun playing for him. He was also me physical education teacher all throughout grade school so I have known him since I was little. It's great to play for him. He expects the best out of every kid he coaches and he's good at getting them to do there best.

What will the team be like this year and can you guys make a run?

I think the team will be good this year. It will be tough but I think we can go pretty good. We have quite a few good players returning. Armando Gomez is one of the big ones returning he will play running back and I think that he is going to have a great year. We also have another running back Cade Miller returning. He will only be a sophomore but he will be a big part of the offense.


Will it be hard for you to adapt from 8-man to 11-man at the collegiate level?

I don't think it will be to hard to adapt to 11-man football. Playing on the line both ways doesn't change very much from 8-man to 11-man. But there will be some things that will change that I'm going to have to get use to.


When do you plan on making your decision?

I'm not sure yet when I'm going to make my decision yet. I'm going to take a few more visits and go to a few games and then when I'm comfortable with wherever it is I'll make the decision.  I'm guessing towards the end of the season.

How has playing multiple sports helped you?

I think playing multiple sports had helped me on the field. Basketball has helped a lot. I've played basketball my whole life and it has helped me move better. It's made me learn how to move my feet quicker and to become faster and more athletic.