v Sports in Kansas: 25 Linebackers to Watch in 2015 - Sports in Kansas 
Warning: include(../includes/bodytag.php): failed to open stream: No such file or directory in /home/kansass/public_html/ks/news/index.php on line 36

Ian Rudzik of Ulysses will look to have a huge senior year on both sides of ball. (Chet Kuplen) 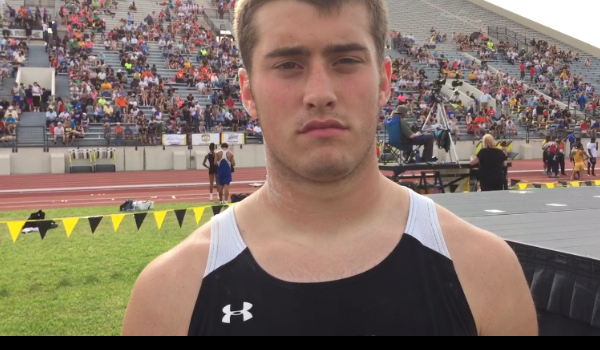 Several all-state linebackers return from having big seasons in 2014, check out them and more to watch this season.

Alena had 72 stops for the 4A-I state champion last year, earning honorable mention honors in one of the most loaded positions in one of Kansas’ best leagues. He returns with four other starters on the Stag defense for 2015.

Barta, who recently committed to play at Kansas State as a greyshirt, will follow the footsteps of his dad and head coach, Brooks, who was a Big Eight All-Conference linebacker for the Wildcats. Mason had 85 tackles from his linebacker position in 2014 and will look to lead a defense that returns seven starters.. He will also be depended upon again at full back for the Wildcats in 2015.

In addition to being one of the best returning running backs in Kansas, you can’t discount that Beckett had 124 stops on the defensive side of the ball at linebacker, making him a player to watch at the position once again. Seven defensive starters return for a 10-3 Dragon team in 2014 that got better each and every week.

Burton ranked second in the Sunflower League in tackles last season at 128. He will be a player to watch for in the Kansas City area this season. Burton is up about 20 pounds from what he was listed at last season, expect a big year for him. Only two starters return for Northwest defense.

Compton had 102 tackles last year for the Vikings. He should be one of the better defenders to watch for in the Sunflower League in 2015 along with teammate DJ Turner. Eight starters return from their defense in 2014.

Conner has been a starter at Derby since his sophomore year and will be relied upon even more in 2015 as the Panthers look to get back to the title game for the second time in three years.

Graham doesn’t get on any lists because of his size, but it’s a good thing that doesn’t matter. Graham racked up 172 tackles last year to rank in the top five of Kansas. The Jaguars return a cast of all-stars on the offense and will need some help from Graham’s defense to be a contender in 4A-I this season.

Scott has had a never ending list of good talent over the years and Cooper Griffith is on that list. Griffith had 164 tackles last season, 17 of which went for loss. He also had over 1,200 yards rushing as a running back. Griffith will be one of the best linebackers in Kansas for the 2015 season and earned first team Non-Senior honors from Sports in Kansas last season.

Honas had 87 tackles last year for his loaded Bishop Carroll squad. His numbers would have even been better but let’s face it, Carroll blew nearly everyone away last season. Honas has the size, speed and strength to make someone a very good football player at the next level. Expect a monster year out of Honas.

Knoblauch has been in the shadow of many of the Andale stars who graduated last season, including his all-state brother, Hunter, now playing at Kansas State. However, Knoblauch did shine at linebacker last season and earned second team all-conference honors. Knoblauch will also carry the load at running back as only four starters return on each side of the ball for the 2014 4A-I state champion. Expect to hear some new names this fall at Andale.

Larrabee had 69 solo tackles last year from his linebacker position and is one of the bigger players in the state at the position. Meade returns seven starters on offense and eight on defense, making them a contender in 2-1A as they always seem to be.

McDown, more known to many on the offensive side of the ball where he rushed for over 1,600 yards last season, is just as good on the defensive side of the football. As a four-year starter he enters his senior season with 276 career tackles. When he is bored, he lifts weights. You can tell with his improved numbers this summer as he benched 340 and squats 500. McDown took second in 4A powerlifting this past year and also earned Non-Senior first team honors from Sports in Kansas.

Mengarelli is a weight room fanatic and won the 5A state powerlifting title as a junior. He benches 335 and squats 515. Although you may think he is a bit undersized for the division one schools to come calling, he has picked up some interest from colleges. This kid has a nose for the football and will be one of the premier linebackers in 5A this season. Mengarelli also earned all Non-Senior first honors from Sports in Kansas last year.

After seeing film, it’s hard to doubt him as Kansas’ best hitter. Morgan had 120 tackles last season and earned All-6A honors. He was also a first team Non-Senior from Sports in Kansas. Morgan also doubles as one of the state’s best tight ends. Morgan has FBS and FCS offers on the table and will look to improve his stock this season.

Morris earned first team All-EKL honors as a junior last season, the only junior making it on the linebacker list. He tallied 76 tackles from his linebacker position. Morris will look to lead the defense along with four other returning starters, including Mark Collins Jr at defensive back.

Peavler missed some time last season with an injury but had a huge sophomore campaign two years ago in which he lead the team in tackles. He will look to lead a defense that returns just four starters off their 4A-I state runner-up finish.

Schemm has been a four year starter at Wallace County at linebacker and fullback. He is one of the best multi-sport athletes in Kansas. Schemm is a high jumper that went over 6-foot-7 last season as a junior. Schemm, who looked and played like a senior two years ago in the 8M-II state title game, had just of big as a junior football campaign with 99 tackles last season. He also averaged 12 points per game on the 1A-II state championship basketball team last year.

Terry enters his senior season as a three year starter at inside linebacker that has played in two 6A state championship games. Terry won’t impress you with size, as he plays much bigger, but he has a nose for the football picking up 76 tackles last year for the undefeated state champion Lancers. Gone is all-state lineman, Kyle Ball, who signed at Kansas State, but SME returns seven starters off their state championship defense.

Trost had 138 tackles last season in helping the Panthers to the 4A-II playoffs. Concordia has a new head coach in Austin Kingsbury, former all-stater at Smith Center. Kingsbury will look to have Trost lead the Panther defense who returns just five starters off an 8-3 campaign in 2014.

Turner had 128 tackles last year in his junior campaign for the Vikings. He will look to lead a defense that returns eight starters off a team that went 6-5 last season. Don’t be surprised if the Vikings are a contender on the East this season.

Weden led the Crusader defense last season racking up over 100 tackles. He earned first team all-league honors and will look to lead a defense that returns seven starters from 2014. Is Buhler the favorite out of the west for 4A-I this season?

Weibel picked up 77 tackles last season at Wichita Northwest and earned first team All-City league honors in 2014. He has since transferred to Ike where he will be an immediate impact player for the Tigers. Eisenhower returns nine starters on their defense without the addition of Weibel.

Williams led the teams in tackles as a sophomore last season at 128, a team that featured 2015 Holcomb grad and Shrine Bowl West MVP, Blake Richmeier. Williams will look to be one of the top juniors in Kansas this season. Nine starters return on both sides of the ball for the Longhorns in 2015 and Williams will be the leader of the defense.

ADDITIONAL: This list was so hard to break down to just 25, some other players just as deserving to be mentioned on this list.

This list was compiled by Chet Kuplen of Sports in Kansas with input from Ben Mitchum of SB Nation.