v Sports in Kansas: 25 Wide Receivers to Watch in 2015 - Sports in Kansas 
Warning: include(../includes/bodytag.php): failed to open stream: No such file or directory in /home/kansass/public_html/ks/news/index.php on line 36

Dante Brooks of Topeka is an elite WR in Kansas for the 2015 season. (photo: Craig Strever) 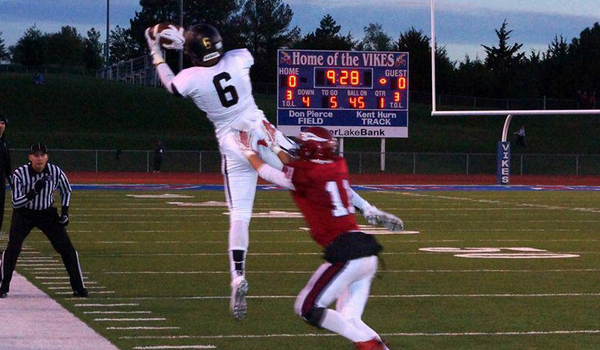 Several receivers return after having big seasons in 2014. Check out who to watch in 2015. Stay tuned over the next few weeks as we will do this position by position and release a full list of players to watch in Kansas. This list from Sports in Kansas is powered by Performance Spine and Sport in Pittsburg, offering full-body cryotheraphy.

Armstrong may be the top receiver in this entire group. His numbers as a sophomore help support that as he had 53 receptions for 1,205 yards and nine touchdowns for the 4A-I undefeated state champions. Armstrong features sub 4.5 forty speed and will be one of the headline players across Kansas this season. Ryan Willis, now at KU, isn’t the QB anymore but it shouldn’t stop Armstrong too much.

Avila plays on a team that struggles, but it didn’t stop him from producing big numbers as a junior in 2014. He caught 61 passes for 929 yards and nine touchdowns over nine games last season.

Becker had a breakout junior season, earning all-state honors in class 5A. He caught 46 passes for 1,042 yards and 16 touchdowns in 12 games for the Cougars. Becker will once again be a player to look for in 5A this season.

Blake had 45 receptions for 732 yards last season for the Mustangs. Although they have struggled recently, North has made strides recently and return some nice pieces off their team from last season.

Bott picked up second team all-city honors in 2014 at wide receiver. He had a big year with 434 yards on 24 receptions.

The more we do of these lists, the more it seems like Topeka has a chance to be really good in 2015. Gone is Alec Beatty, who got Brooks the ball, but it doesn’t take away from him being one of the headline players in 6A this season. Brooks, who is being heavily recruited with at least five offers at the FCS level, had over 700 yards receiving and 10 touchdowns last season. We do know a few things, Topeka will have a line to protect a quarterback, a running back to give the ball to and a receiver they can expect big plays out of.

Cahill is the only first or second team returnee at the receiver position in the very good Sunflower League from 2014, earning a second team nod. He showed big play ability last year with 14 catches for 378 yards. He will also be depended on in the return game.

Blue Valley won’t throw the football a lot but when they do Debey will be the guy they look to go to. He had 227 yards last season on 21 catches.

Dubbert had a huge sophomore year at wide receiver for the Blujays in 2014. Dubbert had 648 yards and 12 touchdowns last season in the 8M-II ranks.  It is still unknown if he will play WR or QB this year after his all-state brother, Trey, graduated. We do know they want the ball in his hands in one way or the other. They also return Parker Gates, who is another guy that can play multiple positions like Dubbert and could even be the quarterback this season.

Duerksen had a huge year in 2014 and earned first team Central Kansas honors. Duerksen was one of the primary targets for Hesston’s, now graduated quarterback, Grant Raleigh. He had 30 catches for 487 yards and 10 touchdowns in helping lead the Swathers to a 10-1 record last season. He will be depended on heavily in 2015.

Huss had a breakout sophomore season by catching 52 passes for 727 yards and nine touchdowns. Gone is all-state gunslinger, Tristan Speer, who graduated in May. Huss will have to have someone to get him the ball in order to have a big year in 2-1A this season.

Jegen is simply an athlete. As we mentioned in a tweet last week “He can do it all”. Jegen had 686 receiving yards last season, 454 rushing yards, and 514 return yards. Bottom line is he’s dangerous with the football in his hands. Mill Valley also returns all-state quarterback candidate, Logan Koch, and all-state lineman candidate, Ben Hecht.

Marcotte had 549 yards receiving and seven touchdowns last season as a junior. Marcotte and Dylan Becker are one of the better wide receiver duos in Kansas for 2015.

McGroarty had a nice junior season in which he had over 700 yards receiving for the Red Demons. Back is all-state QB candidate, Caden Walters. These two should be one of the better QB/WR duos in Western Kansas this season.

Merz had just under 600 yards receiving in his junior campaign in 2015. He will look to have a big senior year. Holcomb has a lot of weapons to go to and it will be hard for any team to key on any certain player, meaning someone different could lead the team in receiving every game this season.

Not a lot of people talk about Murphy because let’s face it there is a lot of hype to share around the cast of star players Miege has and has had. Murphy had a breakout junior year in which he caught 34 balls for 541 yards and seven touchdowns. Murphy is also a speedster as he ran a leg on the state champion 4x100 relay that took first in 4A last spring.

Parnell, who is more known as an all-state basketball player that just committed to division one Central Arkansas, also gets it done in the fall. Last season he had 872 receiving yards with nine touchdowns. Parnell will be a four year starter in basketball and has scored 1,166 points in his high school career, averaging 21.5 as a junior. Peyton Huslig also returns at quarterback, while Jordan Birch returns at tailback, forming one of the best trios in 4A-I this season.

Renoux is more dangerous in the return game than anything but anytime he’s touching the football he is dangerous. With nearly 400 yards receiving last season he will once again be a player to watch in the Wichita area for 2015. Two years ago you may remember him as he appeared on ESPN's Sports Center for a Top 10 play.

Roduner had a big year in 2014 with 556 yards receiving and should be an even bigger part of the Dawgs offense in 2015. He will be the primary weapon for all-state QB, Tucker Horak, to go to when he doesn’t use his feet. Coach Hammes says Roduner had a great summer, runs great routes and will be utilized when moving around in their offense.

Rogers returned to Pittsburg last November after playing at 8-man Chetopa last fall. He was a first team all-state selection last year as he had over 1,000 yards receiving and 22 touchdown receptions for the Green Hornets. Rogers backed up Alex Barnes, now a Kansas State running back, as a sophomore before transferring to Chetopa. Pittsburg won’t line up and throw the football a lot and it’s still unclear how they will use Rogers. However they do he will be dangerous with the football in his hands and on defense.

Arkansas City struggled last season, winning just three ballgames. A bright spot on their offense was Spencer with 538 yards and nine touchdowns in those nine games.

Stanley has gotten bigger and faster in the off-season and is the lone sophomore on the list. Not many freshmen in the state of Kansas get any playing time, let alone have over 250 yards receiving and four touchdowns on 4A-II’s second place team. The Titans won’t pass a lot but if they need a big play in the air, you know who they are going to. Columbus will look to get back to the 4A-II state title game.

With just under 600 yards receiving last year Stegman will be looked at again as a prime target for Quarterback Trey Treeter. It seems like every list we put out has a Holcomb player or multiple players on it. Along with Conner VanCleave & Christian Merz, this forms a great receiving trio for Trey Teeter in 2015.

Warner had 27 catches for 413 yards as a junior in 2014. Four of his catches went for touchdowns. Warner earned first team Heart of America honors but gone is all-state quarterback Brylie Ware. Warner has improved his speed from last season and is a talented route runner.

List was compiled by Chet Kuplen of Sports in Kansas with input from Ben Mitchum of SB Nation.